When you’ve got some exciting news, you need find for the right moment to announce it. So in November 2014, Oxygen Accelerator and us, Fiedler Capital, got on stage of the How to Web Conference in Bucharest to report our new partnership that made Oxygen’s next cohort exclusively for CEE and Baltic startups only. Since then, my colleage Robert Hegedüs and I began planning a tour with the Oxygen and Fiedler teams across the region to meet with some of the best tech startups that could potentially move to the UK, take part in our programme and expand globally.

But we decided to make the trip more than just about our accelerator, and take the opportunity to get to know the different startup ecosystems more in depth.  So, we set on an 11 city, three-week tour across CEE. Right after the holiday break we kicked off our tour in the Baltics, first in Estonia then Latvia and Lithuania. We had a very tight schedule, which made it fun yet very rushed some times. We took a mixture of planes, trains, and cars to the different cities and countries and the Oxygen team took turns flying in from London to be part of the tour.

To be more flexible, we decided to split in two teamsfor week two; one of the teams went to Poland (Warsaw and Krakow), the other team went to Cluj in Romania and Prague in Czech Republic. Week three we were in Slovenia, Hungary, Austria, and ended our tour in Bulgaria.

Even if we planned all of our stops after the same pattern, the experience was unique each time. On every afternoon you could expect us to hold one-to-one mentor sessions with anyone and any startup that wanted to meet with us and get advice. Then in the evening the official event started at 7pm local time. We presented our ideas on how CEE and Baltic startups can go global, tried to answer all the questions that appeared in the Q&As sessions and continued to discuss details of the programme or comments of participants over free pizza and beers!

Before the one-to-one mentorsessions, we tried meeting with as many people in the local startup ecosystem as possible. While on the road we were lucky enough to meet with local investors, accelerators, and coworking spaces that welcomed us and shared with us the what the local community has to offer. It was an incredible experience that definitely reinforced our belief that CEE has so much to offer the world. So the most memorable people we met, in addition to the entrepreneurs of course, were the hosts of the different venues where we had our talks. Everyone was so welcoming and made us feel like part of the local community.

About the expected and unexpected

While the working sessions were rewarding sometimes we just needed to get out there and enjoy being in a different environment every night. So, the best experiences on the road were the night tours given by some of the local entrepreneurs about their cities. Coming from Los Angeles, I’m not used to seeing buildings that are hundreds of years old. It was great learning about the different cultures, history, and food each country has to offer. For example, I can’t wait to go back to Tallinn and have another bear, elk, and wild boar sausage!

But of course, you also have to expect the unexpected so also a breakdown accompanied our tour. The worst experience we had on the road was when our car wouldn’t let us go faster than 80km per hour…and we were still over 400km from our next destination. In some situations you just have to learn to be patient.

Moreover, the biggest challenge when traveling to so many places in a relatively short amount of time is the lack of routine. It’s a challenge to keep a balanced diet, exercise regularly, and keep up with work. Personally, I’m still not used to the cold weather so that added another level of excitement to the trip.

The biggest challenge when traveling to so many places in a relatively short amount of time is the lack of routine.

While the rest of the Fiedler and Oxygen teams took turns each week, I was on tour all three weeks. It got exhausting but while arriving in each new stop, the energy and enthusiasm of the entrepreneurs was so contagious that it would keep me going on and on. And of course, there were countless cups of coffee throughout the entire trip.

Overall, the journey was a real success. We not only met incredible startups and entrepreneurs, but we also were able to share our views on how we believe CEE startups can go global. We can’t wait to be on the road, talking with entrepreneurs again!

The applications for the Oxygen Spring 2015 Class closed on 8 February, so the next big step is theselection camp, which will take place on 18 and 19 February in Budapest. I can’t wait to hopefully see some of the startups we met in the tour present at the camp. I, together with Fiedler Capital, will definitely be going to all of the cities again throughout the next few months. This time we plan on spending a bit more time in each city. 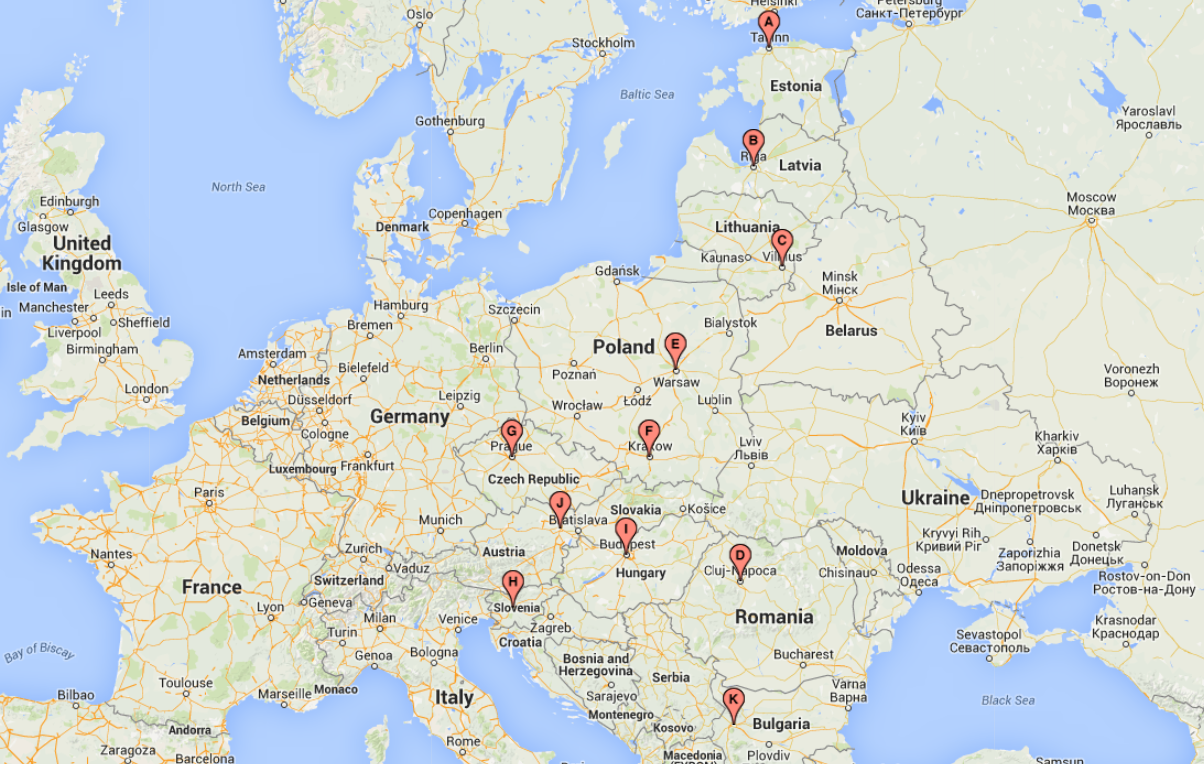