The Techsylvanian Hackaton – a look back 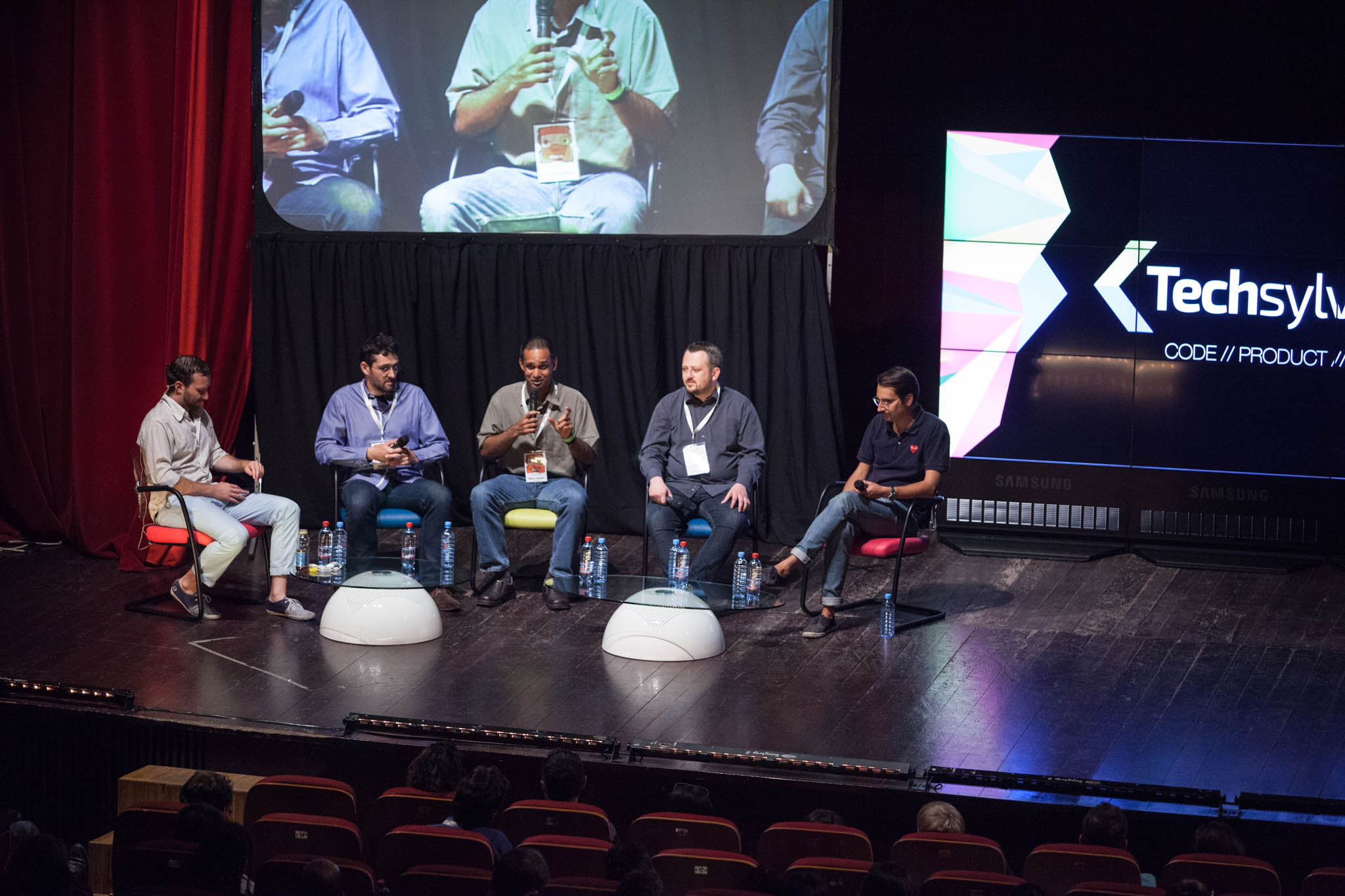 This year’s edition of the Techsylvania conference united more than 700 participants and 42 speakers from several countries over the course of two intense days. While all the speakers were highly appreciated, participants confirmed that the keynotes from Peter Juszczynski (Google), Rohan Chandran (Telenav), Flaviu Simihaian (iMedicare), Jon Bradford (Techstars) and the panel focused on investment or product management were quite memorable. Find a complete list of speakers here.

Undoubtedly, these inspirational speakers shared their vision of the future of connected devices and fueled the creativity of participants, as the resourcefulness of the Hackathon participants has shown.

The most interesting fact was that people had a chance to work on devices and gadgets they don’t normally have access to.

The Techsylvania Hackathon comprised 25 projects that shall bring forward a prototype within 24 hours. Some ideas were related to the medical or agricultural fields, which, according Techsylvania Executive Producer Vlad Ciurca, “really proves that attendees are starting to think on solving real world problems, as opposed to just making a cool hack.” A complete list of competing projects is accessible here.

The Hackathon kicked off with the teams presenting their ideas in 60 seconds. “The most interesting fact was that people had a chance to work on devices and gadgets they don’t normally have access to and this really made them think outside of the box to come up with ideas for these devices,” Ciurca explained. At the end of the Hackathon, each team presents their project in front of a panel of expert judges. 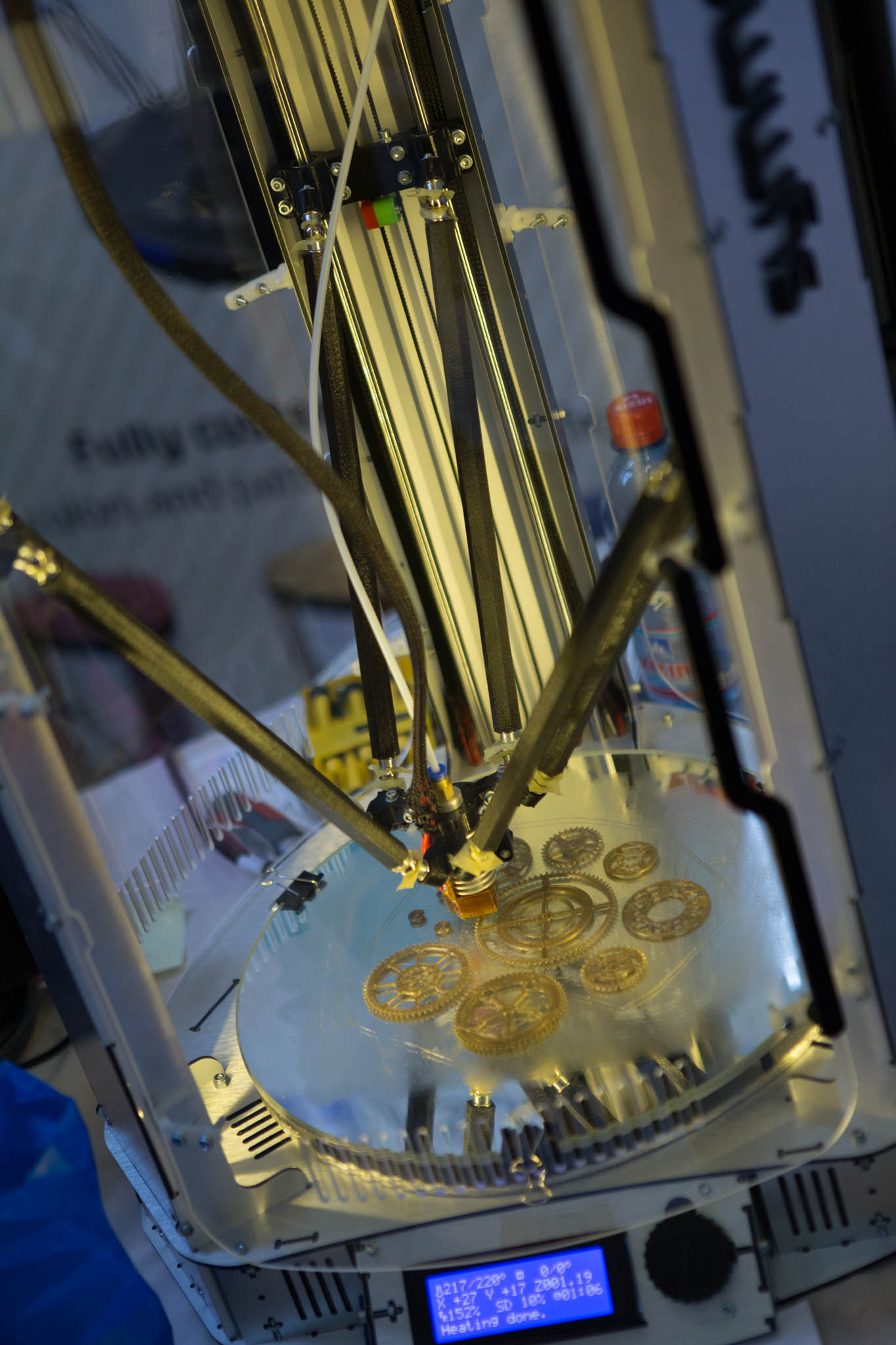 The winning idea was a first aid kit app with short CPR training lessons. Using a smartwatch as an input, the app aims to connect various smartwatches like Garmin or Pebble and offer CPR instructions on devices as well as motion notifications (for number of repeats, when to start/stop etc.) during the CPR procedure. Moreover, the app is set to automatically call the emergency number and put the phone on speaker so that the rescuer is well guided.

Second place was awarded to Race Evolution, an app that plans to use Garmin Devices and Google Glass to send exact data to a participant in any type of race about position, time (in comparison to the front runner and the follower, the race leader) and perhaps even send signals to other participants when someone stops or quits the race.

No AFK was awarded third place for an virtual audio mixer which can be controlled with the use of Leap Motion. This application allows you to change the volume, pitch and switch between tracks. Even mixing is possible so we expect to see some DJs in the showcase.

To reward their creativity, the winning teams will be able to take advantage of mentoring sessions under the guidance of Rodeapps and Pitech+Plus‘ CEOs. Moreover, the winners have also received five free tickets to Shift Split, free tickets for the whole team to Startup Istanbul as well as several months of free coworking at Cluj Hub. First place will also participate in the Young Leaders Club’s pre-acceleration program held in Constanta between 21 and 28 June.

On top of these opportunities, the winning teams also got a plethora of high tech devices to practice their skills on, including the Parrot, Pebble Watches, Leap Motion, Bitdefender products, and MetaWear among others.

We’re looking forward to seeing these projects come to life on our favourite devices! 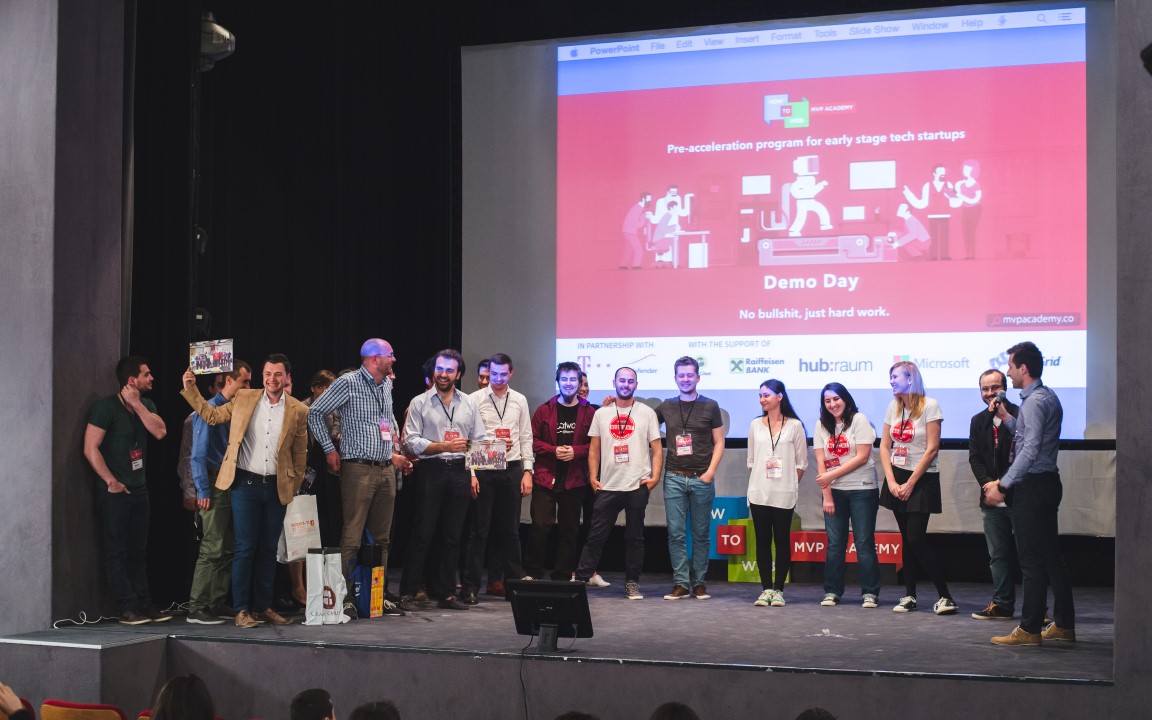 This weekend, the determined teams faced the crowning challenge of the MVP pre-acceleration programme: putting their vision to the test by pitching their startups on demo day. inventures.eu caught up with the MVP Academy to find out how the Class of 2015 progressed.

6 months of progress in 7 weeks 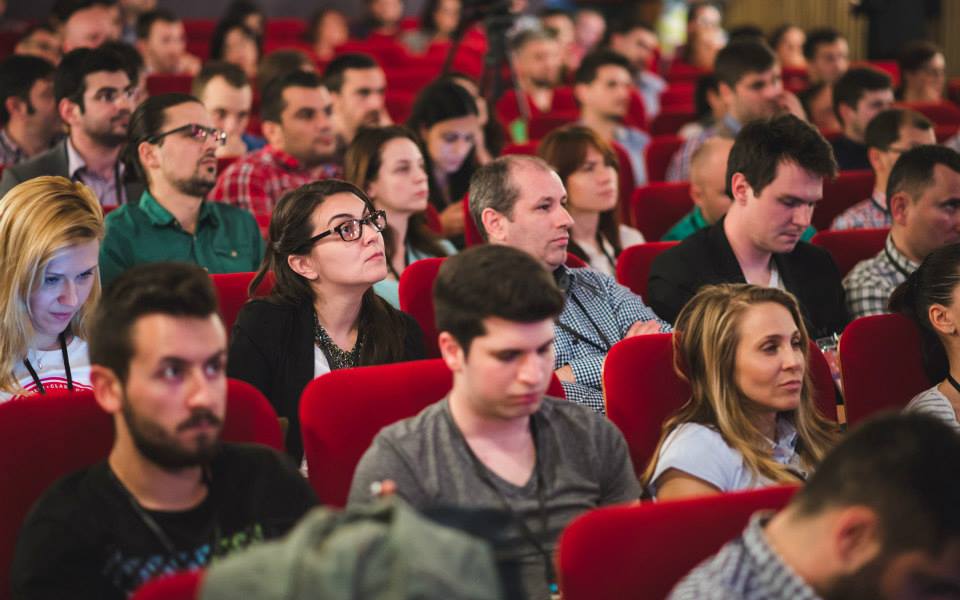 MVP Academy Programme Manager George Dita confirmed that the programme challenged the young teams to take their products to market. “They have pivoted, deployed, started piloting, and even generated their first revenue. It is easy to forget that we only started a few weeks ago, because we manage together to turn what would have otherwise been five to six months of work into seven weeks of progress,” he concluded.

For Tudor Cobalas, cofounder of SafeDrive, taking part in the MVP Academy was a time investment worth its while. “We’ve learnt where to focus in terms of product and how to maximize each interaction with potential interested parties (either users or investors),” he explained. For SafeDrive, significant progress came in the form of an improved pitch and new found focus on the most valuable aspects of the product. “This is incredibly important since you always face a distributed attention of your audience,” added Cobalas.

Cobalas and his team are working on a mobile app that improves the traffic safety by rewarding the users who don’t use the phone while driving with points that can be converted in products and services. They have already won gold in the Edison Award in the Lifestyle & Social Impact category and showed considerable progress during the intense weeks at the MVP Academy.

Going forward, Dita acknowledges the need for the startups to solidify their presence in their respective markets. “For most of them this means receiving funding, relocating and growing a network, while for others it means just piloting their products with relevant customers in those markets,” he explains.

For SafeDrive as well, the next challenge involves achieving product-market-fit for their app, identify the best acquisition channels and further validating that responsible drivers can be a viable business model. However, an immediate step is applying to an accelerator and securing a seed round.

Discover the future of connected devices at Techsylvania 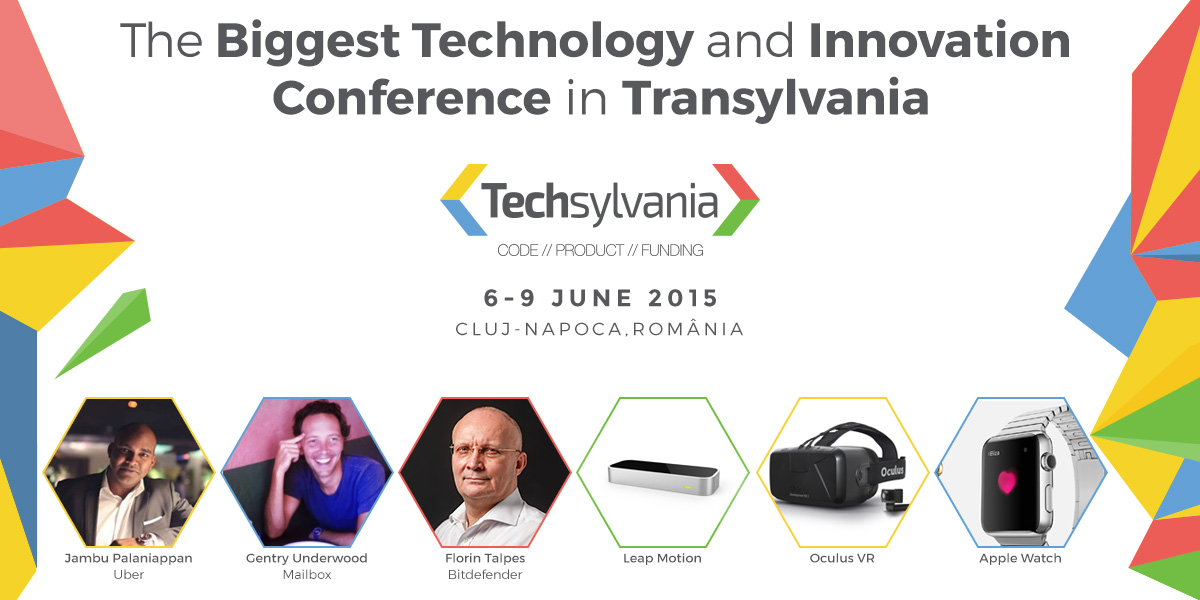 For its second edition, the Techsylvania conference will gather 500 creative minds from all over the world to not only learn and be inspired about key topics of technology and innovation, but also to connect, network and meet future collaboration partners. Participants will also have the opportunity to meet 20 disruptive technology speaker who will share their insights about what the future may bring. Florin Talpes, the CEO of Bitdefener will share his experience as a leader of one of the industry’s fastest growing companies. Christiano Betta, the Senior Development Advocate at PayPal; Peter Juszczynski, Branding Evangelist at Google, Jambu Palaniappan from Uber and David Bettner, the creator of Words with Friends, will also be taking the stage at Techsylvania 2015 among others.

Executive producer Vlad Ciurca feels that the Techsylvania event is a chance to promote Cluj-Napoca communities as tech centers on an international level and to stimulate the development of local products. “The event offers the opportunity of social interaction for the purpose of establishing partnerships, seeking financing or obtaining coaching from experts, as well as promoting technical breakthrough ideas of Romanian developers,” he told inventures.eu.

On 6-7 June, Techsylvania will host a hackathon focused on wearable and connected technologies where teams of talented people come together to hack innovative solutions for devices such as the Apple Watch, Moto 360, Google Glass, Leap Motion and Pebble among others. The hackathon is open both to students  and experienced developers who have a creative idea for these types of technologies. Participants can either register for the event as a group (4-5 people) or form a team on the spot. Top three teams will have free passes to the conference and also the chance to demo their projects in front of the entire audience at the Techsylvania conference. More information is available here.

Make sure you get a spot by registering on the Techsylvania homepage. For the Hackathon, the ticket costs 29€, but students only pay 19€. Conference attendees pay 69€ if they are builders or 119€ for a VIP ticket, but prices will increase right before the event. Stay tuned to find out how this event plays out via inventures.

The IoT Junior Cup Austria has just revealed the 48 projects that will be participating in the 2015 edition of the Internet of Things project competition for high school students, organised by LineMetrics. This Vienna based startup has initiated the IoT Junior cup with the goal of increasing Internet of Things (IoT) literacy among the Austrian youth. Catch up on the details of the competition on invenures.eu here.

From 3D printers, open source e-service stations to pizza deliveries at your fingertips, the 128 participants have shown creativity and ingenuity. 48 IoT projects have been submitted for the cup before the application deadline on 6 March. In the last two weeks, 147 free hardware components and software licenses were shipped to participants to get them started and now the implementation phase is in full swing. “The world is changing. We need to nurture talent to continue international front to be there,” said Wolfgang Hafenscher, CMO and cofounder LineMetrics. Stay updated on the IoT Junior Cup Austria here.