A myriad of pathways and tunnels weave through the office building located on the technology campus of the University of Innsbruck – almost like a labyrinth. The office of Airborne Hydromapping (AHM) is tucked away behind a huge underground hall that could easily fit a plane. While Frank Steinbacher and his team do own a plane, theirs is based at the local airport just across the street from campus. There are definitely not a lot of startups that can brag about owning a plane, but for Frank Steinbacher, Tecnam P2006T is not some luxury toy or part of a jet-set fantasy – far from that. It’s his source of his income, and that of his team of 12. The plane, which fits four people and cost half a million euros (not to mention current expenses and maintenance), boasts an integrated optical measurement system and other devices that allow the team at AHM use to fly over bodies of shallow water to collect vast amounts of data.

“In Austria, we already conducted measurement flights of Lake Constance, the Inn, the Salzach, as well as branches of the Danube, the Achensee, and the Isar,” says Frank.  The 35-year-old Bavarian, who owns 80% of the company’s shares, founded AHM in November 2010 together with his professor, as an “academic spin-off” of his Ph.D. dissertation. A civil engineering graduate from the University of Technology in Munich, Frank has for a long time been interested in bodies of water.

A stroke of luck

“I started asking myself years ago: Is there no better way of measuring bodies of water than the archaic methods we currently have?” he says. Such standard methods involve acoustic measuring systems on a boat and measuring by foot. Frank thus started looking for ways to make the process less time-consuming and the results more specific. When one of his professors, an expert in hydraulic engineering, accepted a position at the University of Innsbruck, Frank joined him. “It was a stroke of luck”, he says. 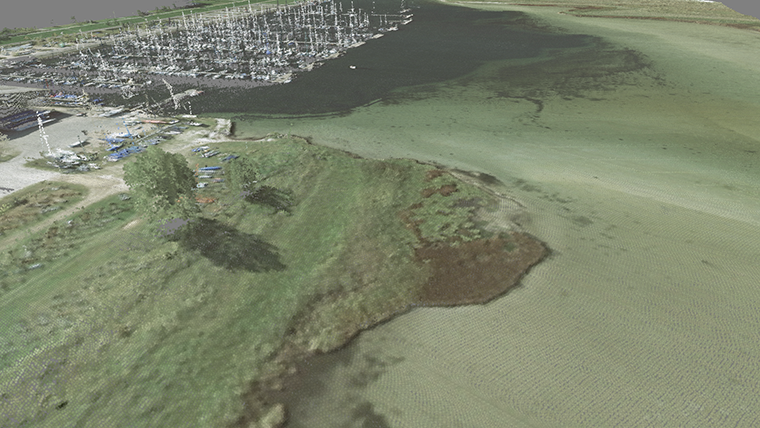 Satellite image of the Ostsee Photo credit: AHMPartnering up with Riegl LMS, a Waldviertel-based producer of optical measuring systems, as the technical partner for his dissertation research, Frank and his team embarked on a three-year long research process. At the end, they had developed an opticalmeasuring system that allows for the mapping of bodies of water from up above by flying over them.

With the standard procedure, researchers create so-called cross-profiles by collecting data about the body of water every 50-200 meters, which is very time-consuming. “Using the old measuring method, it takes six to nine months to measure 70 kilometres. The advantage of our method is that under good measurement conditions, we can do it in one day,” says Frank. “In addition to that, our measurement system allows, for the first time, to collect data from below and above the water surface.”

The novelty of AHM’s approach might explain why Frank’s team faced the same difficulties that almost every startup encounters: promoting their idea and convincing people it’s a good one is difficult. “New measurement systems are often met with skepticism. It’s really not that easy to penetrate the market,” says Frank. “We have to put a lot of effort in convincing the clients of the quality of our data.” 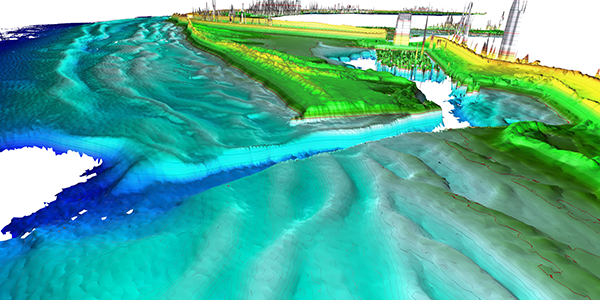 A topobathymetric cloud diagramme with colour mapping Photo credit: AHMWeekends and holidays are therefore more or less non-existent for Frank. “If you want to have your own firm, you have to work 24/7. The last time I truly went on vacation – also psychologically – was long ago,” Frank says. Last summer, he took six days to travel to Italy – because it coincided with a maintenance appointment for the plane. “If you work on a self-employed basis, you’re never really on vacation. In your head, you are always at work.”

Thus, to recharge his batteries, the Bavarian has begun to actively make time for free-time. He runs, goes rowing, skiing and biking – and he flies. „I got my airline transport pilot’s license because I was so fascinated by flying,” he says. “And it also came in handy when we first got the plane.”

The years of hard work sure seem to be paying off. Not only has AHM been profitable since day one, the startup also has no loans to pay back. An initial financing through CAST and AWS helped to make major acquisitions, to integrate the technology into the airplane, to get licenses and hardware – and to build up a financial cushion.

In September 2013, AHM was awarded the Innovationspreis from Land Tirol and Wirtschaftskammer Tirol in the category “innovative science”. With major projects in Denmark, Norway, Switzerland, Italy, Germany, among others, AHM has also established itself in Europe as the geographic area of operations. “We even received requests from Japan,” Frank says. “But only for data analysis. It simply wouldn’t make much sense to fly all the way there to collect data.”

The data collected on such measurement flights is put to use in a variety of fields, like flood protection and control, ecological denaturation and bed-load management of bodies of water, as well as morphological research, and monitoring. “Mankind has had a very negative impact on bodies of water,” says Frank. “There is a lot of degradation, vegetation is dying out.” To generate more reliable data on these developments, AHM monitors changes in bodies of water over time and, by doing so, “assists in their preservation,” says Frank.

Today, 70 percent of AHM’s clients are from public bodies, with the rest coming from the private sector. “In Austria and Germany, the state or municipalities, and sometimes energy providers that are located in proximity to the body of water, are responsible for the maintenance of bodies of water,” Frank says. As Frank’s team is becoming more and more actively engaged outside of Austria and Germany, however, the number of private sector clients is continuously rising.

On to new things – and software

In order to further expand their reach, the team, consisting of physicists, mathematicians, software developers, engineers, geographers, and geologists, has begun to further develop their work in the area of data analysis and software distribution. “On the market, there is simply no useful software yet. So we decided to develop our own,” says Frank. To this end, AHM is currently working on founding a new startup, AHM Software & Research. The software license will cost 40.000-60.000 euros, which Frank says is “a lot of money but there is also a lot of data behind it which is worth a lot.”

To distribute the software and to increase AHM’s presence in foreign markets, AHM wants to team up with partners in different countries. “As a small firm, it is simply not possible for us to tap into all these markets and to do marketing there,” he says. We need strategic partners to do acquisition and distribution for us.” In addition, Frank and his team are working on coastal projects, and on developing new measuring standards, and other sensors.

“Even if there are a lot of worries and trouble, it’s also a lot of fun,” says Frank. It’s just so exciting to see what can happen in just a short period of time.” Generally, to do what he did – jumping in at the deep end – Frank says, “you have to be a person that likes change; otherwise, self-employment is not the right thing for you.“ 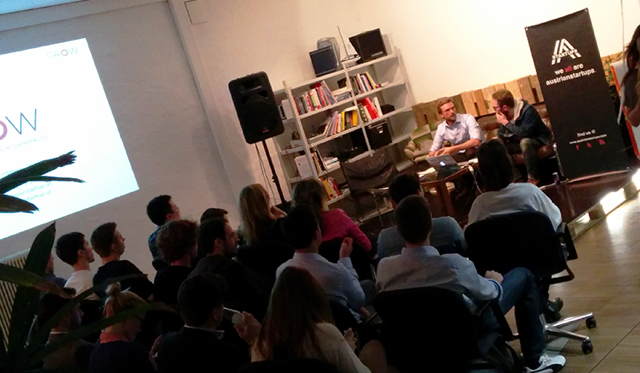 'Don’t forget to protect your idea'