It’s not often that a tech startup venture can create products for diverse purposes, do so without outside investment and turn a profit immediately and continuously, all without losing focus on their core product. However the Macedonian venture, iVote, has done just that since their official founding in 2012 with their elections management system, eLearning solution and eCommerce platform. Interested in their success story, inventures talked to co-founders Prof. Ljupcho Antovski (37) and Prof. Goce Armenski (38).

Emerging from the university

Antovski and Armenski started their academic path in software engineering and Information Technology at the University of Skopje in the mid 1990s, at first as students, then as Teaching Assistants and finally earning their professorships in 2008. “While we were still TAs at the university, we did a lot of consulting jobs and we created several laboratories for research, one of which was the Ericsson research lab for wireless applications,” recalls Armenski, “where we developed and tested a way of using mobile phones to gather election results.”

Such research projects brought them into contact with the Macedonian State Election Commission in 2006 which asked them to put their theoretical research into practice. In 2006 they developed what would later become the core product of iVote: Demokra. 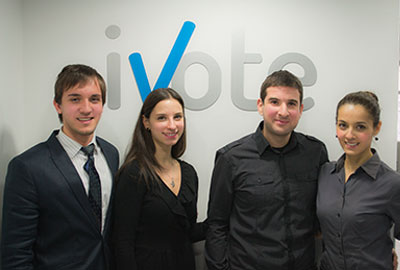 Demokra is an end-to-end elections management software system covering nearly all aspects of administering an election, from the moment one is called to the  official publication of the final tally. Each step along the way –  including candidate approval, voter registration, ballot creation and distribution, formation and training of local electoral bodies, recording results and abnormalities on election day and exit-poll predictions – can be transparently and efficiently managed through Demokra. Results are published almost immediately online and the system is adaptable to a wide array of voting models.

According to iVote, the Demokra platform has been used by some 116 million voters worldwide. It has been used in every Macedonian election since 2006, in Kosovo since 2009, Bosnia and Herzegovina in 2010, Albania in 2013 and 2015, and even in Ecuador in 2013. Apart from the basic software solution, iVote also offers its clients the Demokra data center team, a turnkey solution for onsite monitoring of the system in order to ensure its smooth operation.

Relative newcomers to democratic institutions, the republics of the former Yugoslavia have struggled to gain credibility in their electoral processes and Demokra has been an important factor. “Before Macedonia used our systems,” Armenski claims, “ the state would publish results only three or four days after the election was held. In the last election, the results were online in three hours. Even though they were still using a paper-ballot system, Kosovo’s election results were even streamed live directly from the polling stations.”

If elections occurred more often, iVote probably wouldn’t have the time or capacity to develop any products other than Demokra. But with extra time on their hands, their self-described “second pillar,” an eLearning platform called Epistum, emerged from evident gaps in the electoral process. “There can be  thousands of people across the country administering an election and they all need to be trained simultaneously on electoral law and procedures,” explains Antovski. “It is quite costly to bring them together for trainings – to arrange for travel and to book seminar rooms – so we produce high-quality, intuitive, online courses that enable self-learning and reduce costs for our clients.”

Epistum has also been used by Macedonia’s Ministry of Information Society and Civil Administration for training its civil servant corps, as well as by the Ministry of the Interior for training the police force. “It is proof-of-concept that our platform functions with a large number of users,” claims Armenski, who believes that the system can go beyond only governmental purposes and into the private sector, where any business with widespread employee base would benefit.

Between developing the election-management and the eLearning systems, iVote used its free capacity to create an eCommerce system called Cisium. Antovski explains what sets it apart from a crowded field: “Whilethere are many companies that develop eCommerce platforms and other companies that buy systems for selling online, we are one of the few companies that does both.” In 2012, they launched the largest online bookstore in the region, KupiKniga.mk. Armenski says, “we teach eCommerce at the university, so it was also a good proof-of-concept for the region, where at the moment eCommerce is at a very low level, though it is really picking up. The IT knowledge level in regional businesses is not as developed here as in western Europe, so we must educate them in supply chain, marketing and distribution before we can help them sell theirproducts online. We are at the forefront and are confident that in the next few years Cisium will be well positioned to be a market leader.”

However, Demokra remains the product gaining iVote international recognition as a top-notch innovator. In 2013, iVote won the European Venture Contest award in the IT sector, and last year they were selected as the national champion representing Macedonia for the European Business Awards. They have also been selected as one of about forty European SMEs to be featured in “The Secret of Success, 2014-15,” a booklet issued by the European Commission’s Directorate of Enterprise and Industry.

One might think that their diverse product palette (by the way, they also offer a digital archiving product called Papirum) might make iVote a Jack-of-all-trades but master of none. But it’s precisely this diversification that has enabled the venture to grow organically, remain profitable and do so without outside investment or public-sector financing. Sales turnover reached a half-million euros in 2013. With the other “pillars,” iVote is able to maintain a team of twenty employees throughout an uneven cycle of elections and its revenue keeps growing even during financial crises. “Actually, during times of economic crisis, we can expand,” says Antovski, “because there are generally more early elections!” 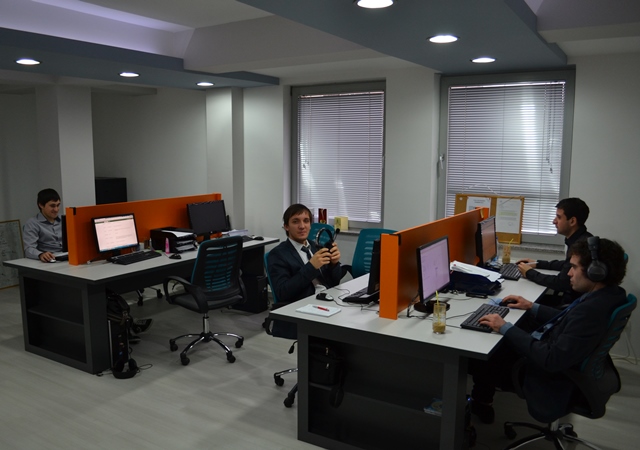 Armenski adds, “As we scale up Demokra, we might spin off a separate company for eLearning and eCommerce, but at this moment there is enough capacity in our organisation to handle it all, for practical reasons as well, in that it is more profitable and lowers our overhead. However, eventually it will be necessary to focus on our core product, Demokra.”

“Eastern Europe is a great market for us, we are very competitive and feel at home here, with good connections,” says Antovski, “but we are very interested in the western European markets and the American markets. Worldwide there are many companies offering elections management systems, but we have some competitive advantages, like being an agile and fast moving small company. Operating in a SEE country, our low overhead allows us to be competitive in price. But most importantly, although many companies claim to offer everything, we are one of the few that do have a working platform that is easily customisable and quickly deployable anywhere around the world.”

Getting the help they need

Although winning awards and recognitions has brought attention from international investors, Antovski says “we haven’t closed a deal yet, because during this process we realised that we did not need money for our operational work, but rather strategic partners to realise our sales potential worldwide.”

To help secure international strategic partners andrealise their sales potential, iVote is seeking outside help. Last August, the company announced that they have hired a new CEO, Saso Jovanovski. His experience as VP for the Slovenia-based ERP company, DataLab, and MBA from the prestigious COTRUGLI business school will be a vital asset moving forward, while managing a growing team, maintaining cash flow and profit margins.

Both professors see a huge potential for developing the company and are committed to growing it into a market leader. Armenski predicts optimistically: “I strongly believe that this year and next you will hear quite a lot about us. That’s a promise!” 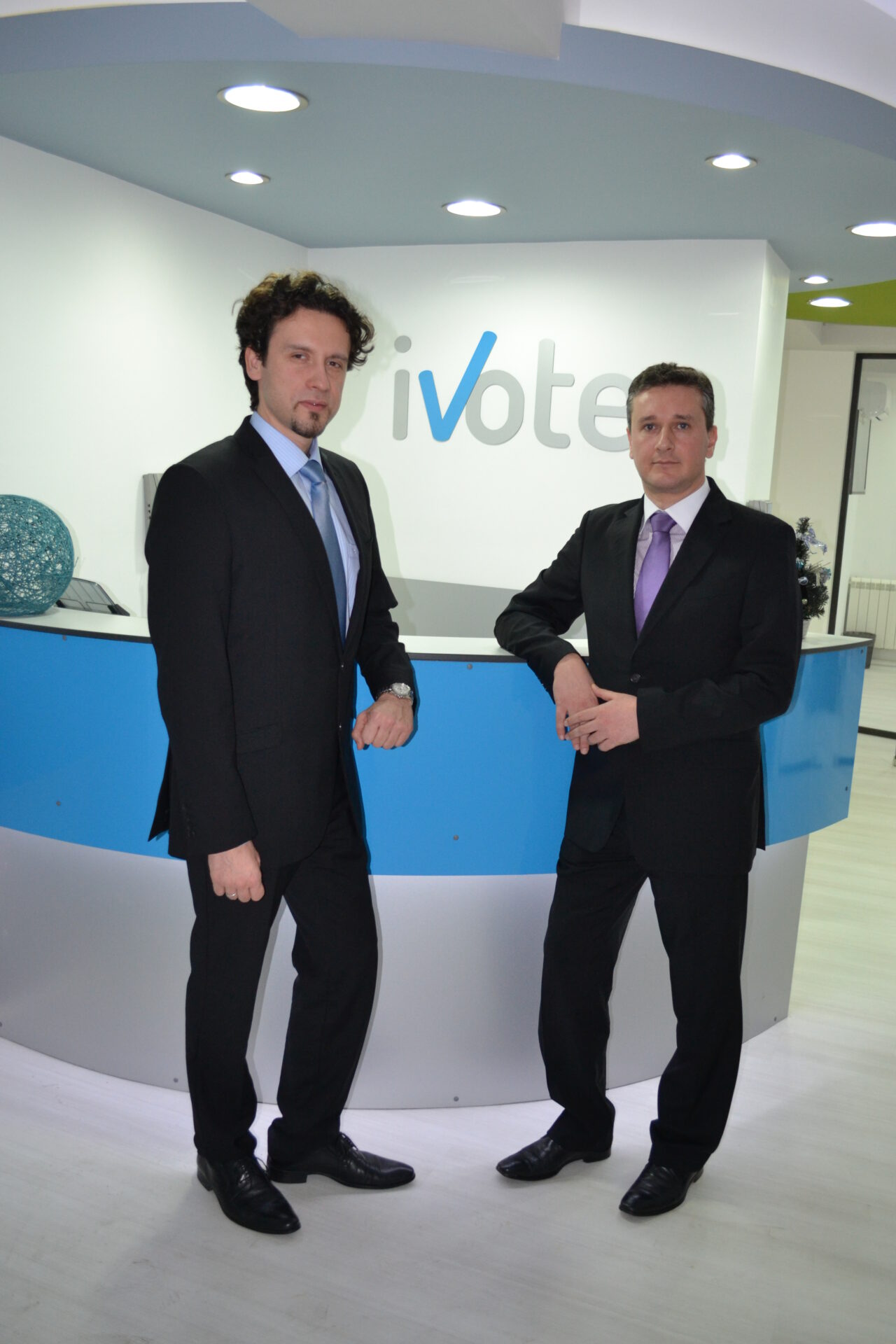