We, at inventures, are all under 30 and know what it feels like to be young and to want to take things in your hands. We also have an idea of how other young people feel about it, as we talk to 20- and 30-something entrepreneurs on a daily basis (it’s in our job description, after all). Yet, you don’t need to be in a startup to make a change. As part of Romanian Week, we took a current event from the country and looked at it through the eyes of the young. Below is what we found out.

On the night of 10 November, the square was calmer than she had expected it to be. It was yet another Sunday night; a thousand people – maybe two, gathered tightly on Piata Universitatii, some of them spilling out on the adjacent Regina Elisabeta Boulevard. The stage was in place, the microphone, the loudspeakers. The crowd was waiting in anticipation. It was almost like a scene from a concert or a festival, she recalls.

But this wasn’t going to be a show. This was a protest.

A band was performing on stage; people were speaking about bravery, about “this battle we must win”, praising everybody who was part of it. But what about all those who sat in front of their computer screens, in the comfort of their homes – why was nobody saying anything about them? That’s when she knew it was time to raise her voice.

She’s not a fictional character, and she’s also not anonymous. Her name is Laura Ionescu, she is 23 years old and a copywriter from Bucharest. Laura knows enough about digital media to assess the power of the internet – it can bring people together, but in itself, it’s not enough to make a statement that lasts.

She walked up to the stage and took the microphone. 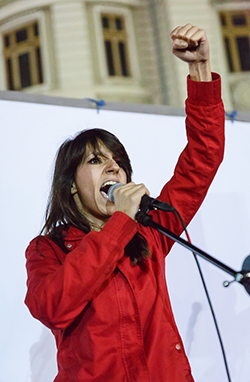 Leave the gold where it is

The peaceful demonstrations started on 1 September, a few days after the Romanian government proposed a draft bill, which – if approved – would give the green light to a Canadian-led mining project in the area of Rosia Montana, Transylvania. Gabriel Resources, the company behind the project, has been waiting for 14 years for the state’s approval, and a potential passing of the law would grant it permission to use cyanide to mine gold and silver in Rosia Montana.

The ruling Social Democratic Party expressed its support for the project after it reportedly negotiated a larger stake in the Rosia Montana Gold Corporation (RMGC), the project promoter. Gabriel Resources currently owns roughly 80% of RMGC, which leaves 20% to the Romanian government, whose stake, however, will go up to 25% should the draft bill pass.

“The Rosia Montana issue is just one example of lack of political responsibility (we have plenty of that around here),”says Luiza Vasiliu, journalist for the Romanian magazine Dilema veche. “[Yet] it’s the most dangerous example, because the consequences of this particular cyanide mining project could be fatal to the environment and the inhabitants of this country.”

Originally, it was up to Parliament to vote and decide on the future of Rosia Montana, but the protests pressured Prime Minister Victor Ponta to form a special parliamentary committee to evaluate the draft. The bill was eventually rejected with 17 votes against and two abstentions earlier this week. Parliament is soon to cast its final vote, and although nothing has been decided yet, analysts expect it will reinforce the decision of the committee.

And while the call is in the hands of the state, the citizens have been out giving voice to their concerns.

Take it to the streets

Day 1 of the protests brought together about 3.000-4.000 people in Bucharest, which many consider a large number, since the protest evolved from a Facebook event. Days 2 and 3 each saw 18.000-20.000 protesters in the capital, and another several thousand in other cities. During the first two weeks, people were out every day and although many remain persistent, they now tend to stick to one main march on Sundays.

“Initially, I went out and protested against the abuse and illegal exploitation of Rosia Montana, yet I knew there was much more to it,” says 25-year-old freelance photographer Catalin Georgescu. More than 23 years after the fall of communism, corruption is not easy to ignore, he adds, and he sounds determined to do something about it.

“There’s this mentality among older people that we should keep our heads down and not speak up, because things are how they are,” he says. “Well, this is not how it goes anymore.” Catalin admits that such a statement might be somewhat of a generalisation, yet he doesn’t seem to be far off.

Claudiu Craciun is 35 years old, he’s lecturer in political science at the SNSPA in Bucharest, and this is not his first time demonstrating. “Going out and protesting is a supreme civic gesture,” he says. The developments around the Rosia Montana project he calls “a symptom”. “Yes, it’s about public health, it’s about the environment, but it’s also about the political structures in the country.”

In the name of togetherness

30-year-old Catalina Miciu is onboard, too. Although the words government, injustice and corruption recur in our conversation, she seems to place the emphasis on something else. “I’m not among the most active of protesters, yet what I want people to understand is that ‘solidarity’ is not just this big word. It is possible and it is happening. We shouldn’t leave the more active protesters run and shout on their own – we need to stick up for each other.”

Many of the people demonstrating are between 25 and 35 years old, have steady jobs, a fairly good income, and are well informed. But that is not say that there is no mix of ages. The movement has seen little children to 40- and 50-somethings to entire families. Catalina has already brought her father to the protests three times, which she believes is a “big thing” and it does show that they are all fighting for a common cause.

What speaks perhaps even more in favour of togetherness is the fact that, to this day, the movement doesn’t have a true leader. “I think what’s happening is, we’re creating an alternative to the usual hierarchical organisations,” says Claudiu. Of course, having no leader has its pros and cons. “This organisation we have now is more unstable, but also more flexible,” he says and adds: “No one trusts the ones in power, which is why I take this [horizontal organisation] as a sign that we’re on the right path.”

Be your own media

Making yourself heard is clearly one of the main goals of the Rosia Montana protests.

“Romanian TV, with some very little exceptions, does a very good job at giving the wrong information to people…” says Luiza. “Romanian newspapers have lost their readers and the main source of accurate information has moved online.” That is not to say that there haven’t been any good reports on the protests, she adds, but most of the information flow has moved to Facebook, Twitter, blogs and to face-to-face communication on the streets.

Catalin can relate to this development, and he has even taken it a step further to become a news outlet himself. “I was out on the street on the first night, and I found it outrageous that there was no media reporting on the protest.” The next evening, being the photographer he is, he took his camera with him and has since been documenting the movement. “I felt the need to be the news outlet that was missing.”

The lack of coverage during the first days of the protests was mainly due to the fact that over the past 14 years that the mining project has been on hold, Gabriel Resources has reportedly been maintaining advertising contracts with some of the mainstream media, making them heavily dependent.

“If everyone planks, people will eventually hear about it,” says Catalin. “It’s the same with the protests – all it takes is enough people to get out and raise their voice.”

Laura is already on it. Getting up on that stage was her moment.

“I was one of those who thought nothing will ever change, [but] this already changed everything,” she says. “It taught us what togetherness feels like. What having something to fight for feels like. What loving our country can turn into. We finally stood up.” 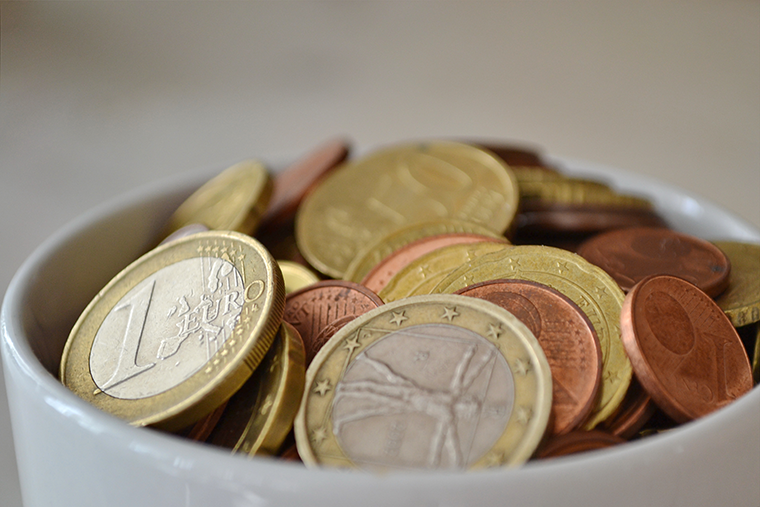 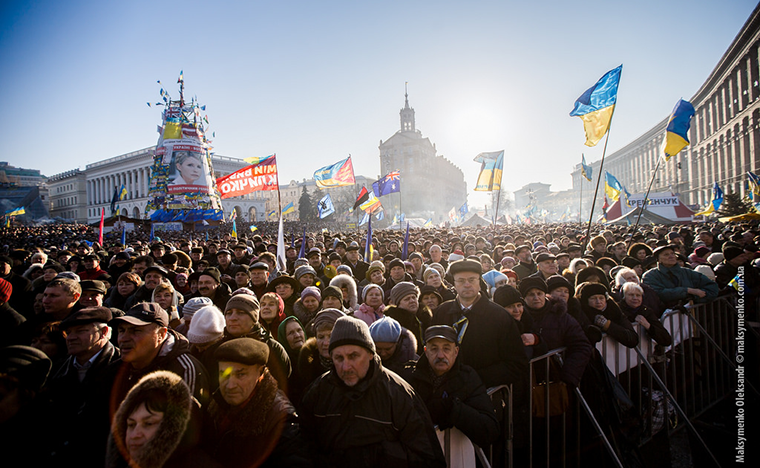 ‘Challenging times to create opportunities ahead’

The what? when? and where?-s in Romania 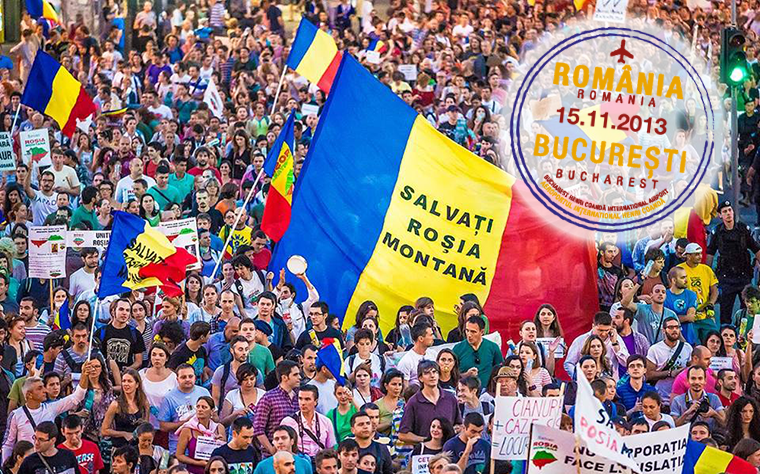