Power to the freelancers

A high-ceiling loft in an old tobacco factory equipped with heterogeneous furniture and colonised by MacBook owners: Poligon, also jokingly called “Hipster Paradise” by some locals, is everything you expect from a popular coworking space. To its co-founders Eva Perčič and Luka Piškorič , the success of the creative centre, which celebrated its first anniversary in February, was well worth the two years of sustained efforts put into its creation, the fruit of decade-long friendship and collaboration.

Their teamwork took off 12 years ago when the two met at a music festival that Luka was promoting. Originally a web designer who ventured in advertising for eight years, Luka developed early on a certain keenness for exploring trends and innovations. Meanwhile, as a market researcher, Eva was looking into the ways people connect when they have little financial resources. Years after years, the idea of conjugating their respective interests into projects to support and develop a coworking culture in Slovenia took shape.

Bringing the community together 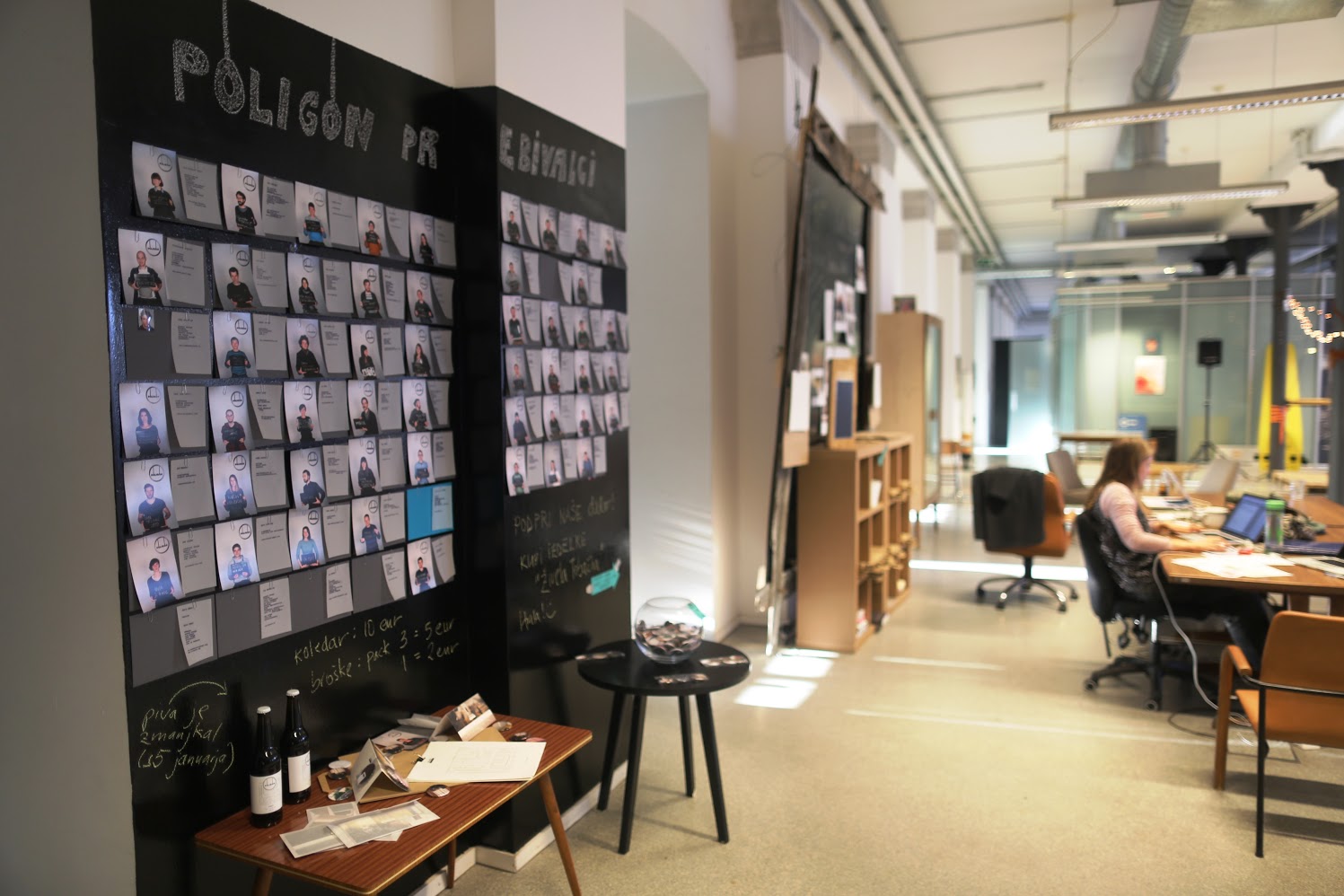 Eva and Luka first came up with the Coworking Slovenia initiative in an attempt to tackle the problem of precarious work, as they observed that the number self-employed young professionals had been rising in Slovenia in recent years.

“Some people go into freelancing by choice, but others are forced into it by the sluggish economy,” Eva says. The concept behind the coworking space was thus to ensure optimal conditions for this segment of professionals to exploit their potential by sharing know-how, igniting ideas and inciting collaborations. “Basically, the idea was to prevent brain-drain and to postpone [young people’s] decision of moving out of Slovenia by joining forces here, in a common space,” she adds.

Hosting the local edition of JellyWeek, a global initiative promoting collaboration, Coworking Slovenia launched in January 2012 at the concert venue Kino Šiška, furnished with work stations for the occasion.

“Over 80 people showed up on the first day, which confirmed there was really a demand for it,” Eva says. Incorporating coworking sessions, workshops and exhibitions, Coworking Slovenia attracted individuals from various innovative fields, progressively growing its member base. “Having a meeting place helped fostering a community of urban creative people,” Luka jumps into the conversation.

With an increasing demand for desk spots, the need for a bigger and permanent space arose over time. Together with Marko Orel, Eva and Luka worked on founding a proper creative centre. Thanks to the help from the community and some furniture donated a by local designer, Poligon finally opened its doors in January 2014 as a joint initiative by Slovenia Coworking, Slovenia Crowdfunding, Šiška Creative Zone and Ljudje.

More than a workplace

A year after its inception, Poligon boasts 150 members, 175 events and 10.000 visitors, some fancy  figures that Luka and Eva attribute to the fact the venue fits freelancers’ needs. Spreading on 800m2, the coworking centre includes a large open space and some private offices, as well as a maker lab with tools for rapid 3D prototyping and product development, a photo studio and a crowdfunding Lab. Yet, with this project Eva and Luka intend to provide more than a physical workspace. “Poligon is a test pilot project of the coworking and sharing economy,” Luka says.

In addition to the strong emphasis put on empowering freelancers, the centre organises thematic programmes, workshops and conferences to promote new ways of working and encourage creative thinking. “Our aim is to make social innovation and entrepreneurship sexy,” he explains, “we want to help taking ideas and turning them into social innovative businesses”. Among those programmes, Crowdfunding Slovenia is behind several campaigns that have peppered the young but explosive history of Slovenian mass funding (read our feature here), including Musguard that has set up an office at Poligon. 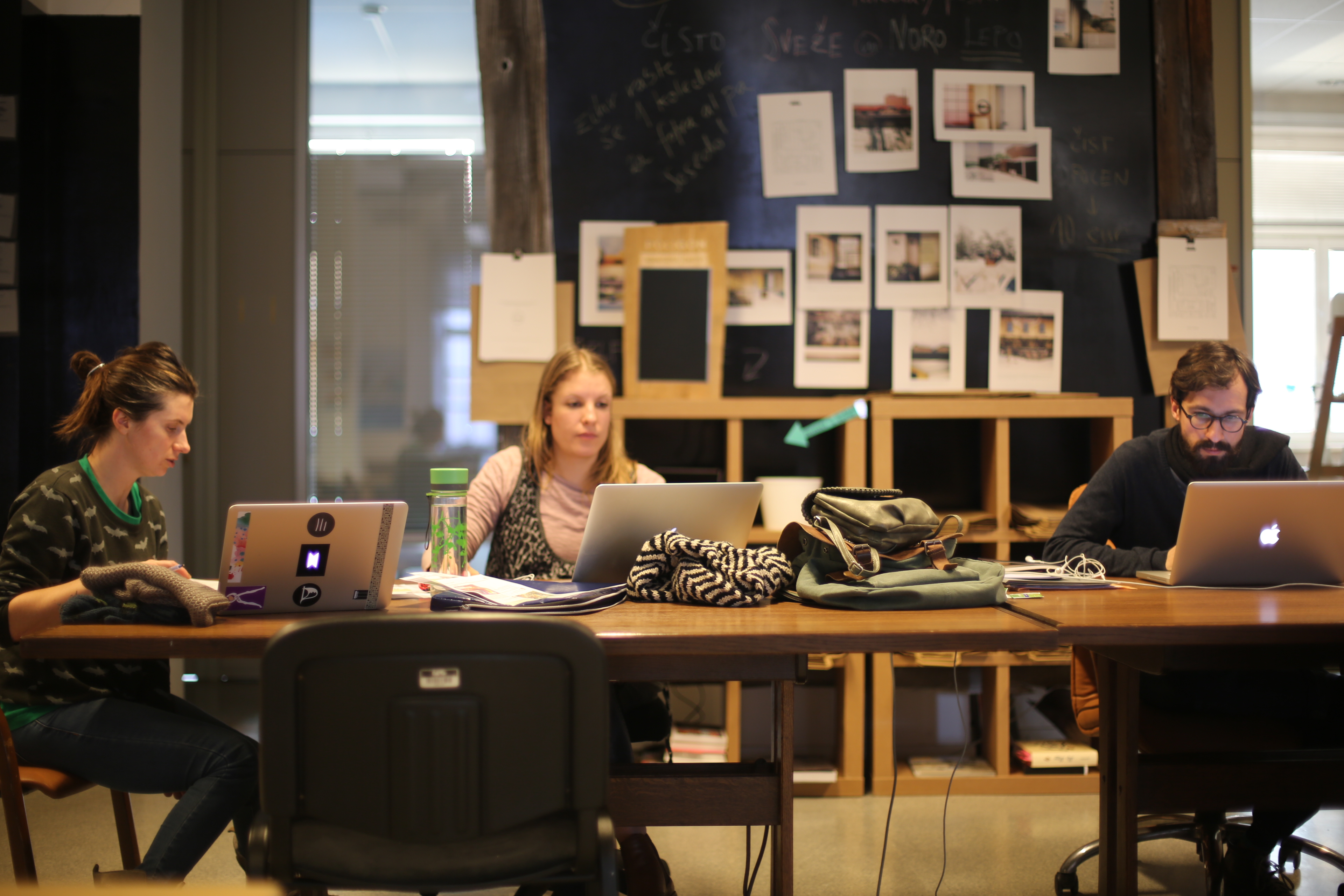 Whether criticised for candid faith into creative projects or under the fire of neo-liberals for its bad business model, Poligon is quite a challenging project to run, according to Eva. On the financial front, the centre struggles to reach sustainability.

“We charge 95€/month for membership, which is not half what we need to cover the rent, yet it’s a fee that not all freelancers can afford,” Eva says, adding that the landlord facilitated the project by agreeing to a progressive rent scheme.

Eva and Luka have put over 5.000 hours of volunteering in Poligon since its creation, keeping their respective researcher and consultant jobs to make a living. Eva explains that behind their enthusiasm are years of frustration of seeing EU funding vanishing in the hands of middle-man institutions in Slovenia. “In addition to latent corruption, the problem is also that creative industries are at the crossroad between industry and culture, a hybrid field that neither have a ministerial portfolio nor a budget,” she says.

At the local level, the Regional Development Agency of Ljubljana Urban Region supported them from late 2013 to January 2015 by financing 200 consulting hours on crowdfunding for aspiring entrepreneurs. Once deprived of this external funding, Poligon found itself in a difficult situation. Yet, the mobilisation of the community and the extensive media coverage of this issue managed to draw the government’s attention. Eva and Luka are now counting on the new tender the authorities should set up in spring to back their initiative, as well as on the systematic scheme to support the development of coworking in the country, expected to launch in autumn this year.

Once in jeopardy, the future of the coworking space looks brighter as Luka announces they intend to acquire a second floor in the building to expand the Creative Centre. In the meantime, Poligon’s restless team has several projects cooking, including Slovenia’s first Library of Things to develop, social innovation expo Sixpo and Sharing Day conference to organise and the establishment of an international network of coworking places to work on. 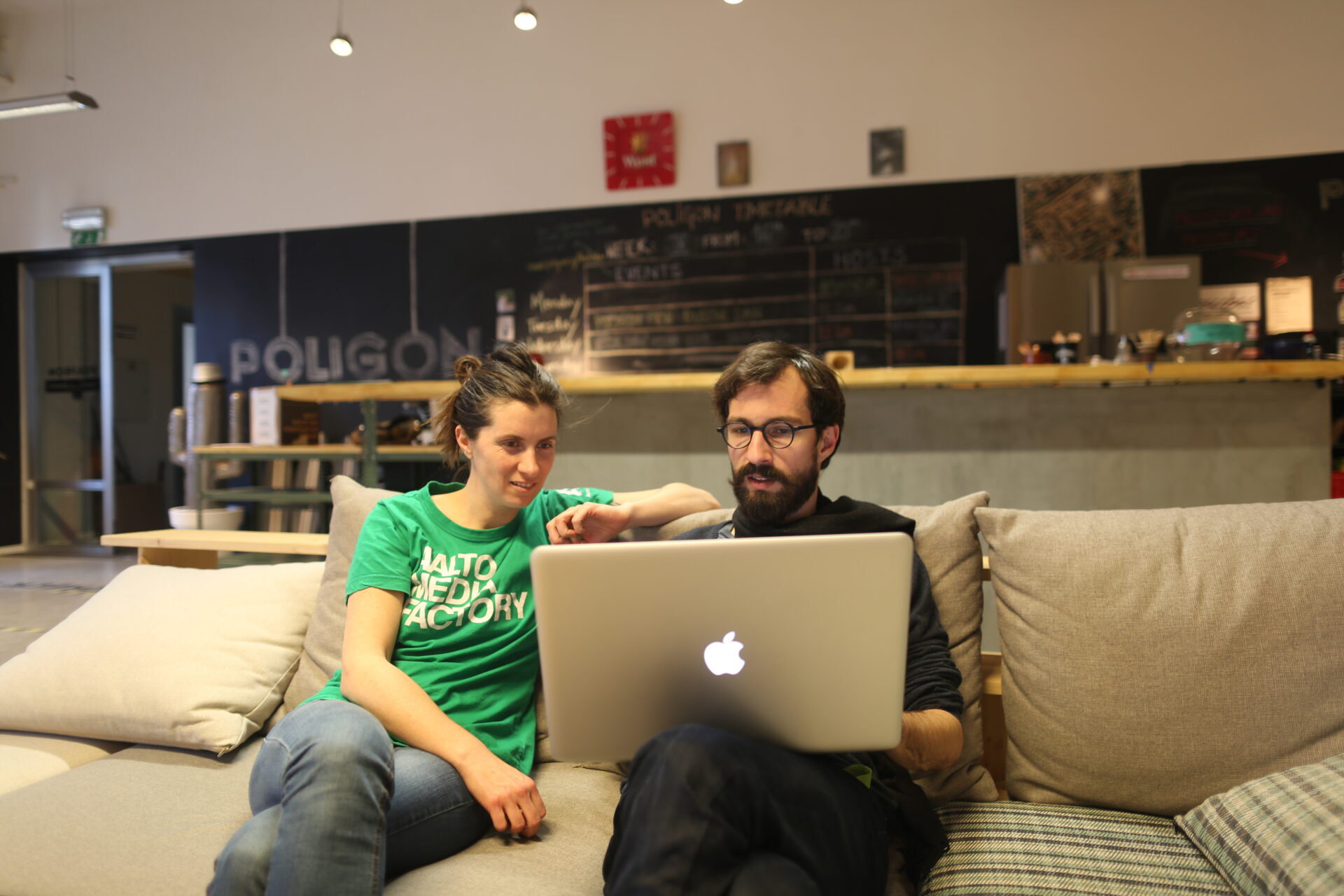 Power to the freelancers