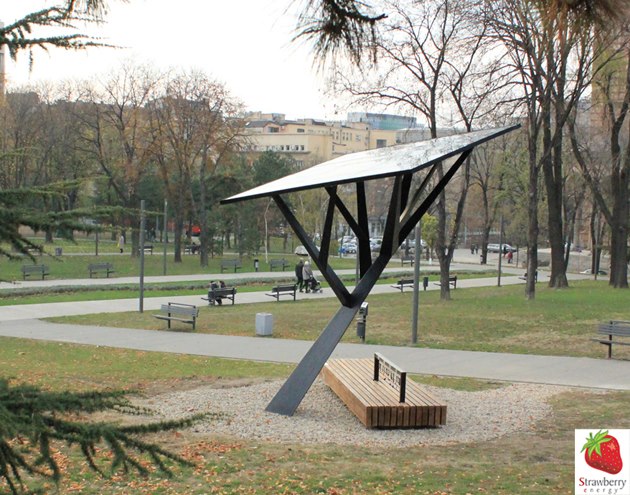 You’re expecting an important call, but your battery is in the red. You’re out of the office, running from one appointment to the other, and somewhat logically – with no charger on you. The sun’s up, it’s hot (we like to stay positive here at inventures), and you wish there were a way to use just a tad of this energy to your advantage. Well, actually there is a way. Just ask the team of Strawberry energy.

The Serbian team of entrepreneurs goes by the motto: “Making renewable energy sources more accessible to all people.” They have developed a product, the Strawberry Tree – a solar charger for portable devices, which is permanently installed in, and around, busy public places. Which certainly makes being far from home and without a charger less of a tragedy. The system is currently at nine locations in seven different cities in Serbia, and as of this week, at two locations in the city of Bijeljina, Bosnia and Herzegovina.  The next stop will reportedly be the city of Bogatić.

“I hope that it [the Strawberry Tree] will serve the citizens of Bijeljina not only as solar charger for mobile devices, but also as an inspiration to think about the importance of renewable energy sources,” said founder and CEO Miloš Milisavljević during the official opening.

This is the company’s first shipment outside of Serbia, and – perhaps as expected – it did have its minor setbacks along the way. “Sometimes people forget that startups are not just web based,” Milisavljević told inventures.eu, and emphasised the large amounts of paperwork and logistical issues involved in exporting their product. But at the end of the day, success comes step by step.

“Clean energy is a new thing”

When Strawberry energy first launched in October 2011, only about 5% of the Serbian population (Milisavljević’s rough estimate) knew about clean energy and how it could be used. Now that number is up to 90% (again his estimate). This paradigm shift, if you will, goes to prove that people’s outlook on things is rarely set in stone. “Think about 100 years ago, and the automotive industry – back then cars were only within the reach of the wealthy, and only few believed that they will be accessible to the wider public. But it happened. Same with computers some 50 years ago.”

So it seems like it’s time for clean energy to take its turn. But before that, “there’s a need to educate people how to use it in their everyday lives and surroundings,” said Milisavljević. This is precisely one of the main goals that Strawberry energy has set themselves – to educate. One way to do so is by enabling users to see exactly how much energy they’ve saved, and what their environmental impact is. To illustrate, the energy saved from one tree in one month was equal to talking on a mobile phone while circling the Earth 13.500 times, or to watching all episodes of Friends in HDTV. The calculations are availableboth in total and individually.

All 11 (soon-to-be 12) Strawberry Trees has a total of up to 300.000 users from an initial 15.000 after the first month of operation. Perhaps the reason for this steady growth has been the team’s goal to create an environment and some “cool new places” for people to hang out and socialise.

The startup launched with no initial investments, and became self-sustainable after the sale of their first Strawberry Tree, said Milisavljević. This – in its own way a success – was perhaps predictable, though, since the Strawberry energy concept had won quite some praise before it even launched as a company. In 2008, the team of then students won the award for Best Technological Innovation in Serbia, andfor best student project from the Association of Energy Sector at Serbia’s Energetic Conference 2009. (To check out some of their other recognitions, go here).

Currently, the company consists of nine full-time employees, and another seven who work part-time. They’re ambitious to grow further with time, and say that they might soon be looking for a VC in order to scale up and boost R&D. As for their competition, Milisavljević said there isn’t really any in Serbia at the moment, yet, he likes to stay realistic.

“We are aware of other companies trying to implement the same or a similar concept,” he said. “There have even been attempts to copy our idea, and we are monitoring those closely.” He doesn’t rule out the possibility of some of these other companies making it with a similar product, but as there is currently no market leader in Europe, he believes that this could be “a good opportunity for Strawberry energy to try and become one.”

Once the team covers Bosnia and Herzegovina, they will very likely try to expand to other countries – on the Balkans, to start with. Stay tuned; your city might be next on the map!