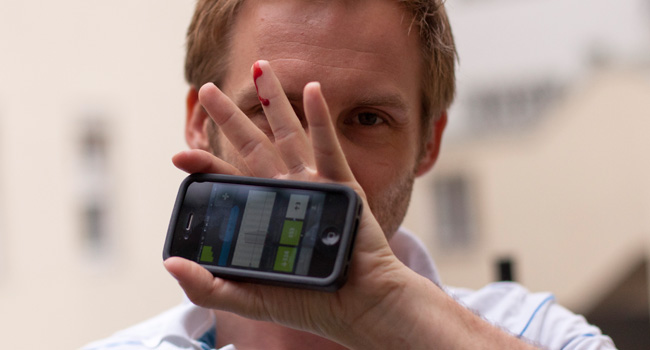 Frederik Debong is a diabetic, and mySugr is his self-developped app that simplifies the measurements of food intake and insulin for diabetics.

Sitting in the shared workspace of Sektor 5 in Vienna, Debong comes across as a suave young businessman on a clear mission: making life easier for diabetics. To him, they’re a class in and of themselves, and he’d like to be their champion. And as far as champions go, he’s a good man to have your corner. There is an intensity talking to him, it isn’t anything overt, more of a single mindedness that never strays far from the crusade of mySugr. When asked what characteristics contribute to his success he answers, “My best quality…when I’m calm,I’m a good listener.”  Listening to his thoughtful answers, tinged with a seriousness appropriate to the topic, it’s hard to believe this man could be anything but calm.

In the eight years since leaving his native Sweden to join his wife in Vienna, Debong has made his mark on the Austrian tech scene. Winning TechCrunch last year in Vienna at Startup Week – the predecessor to Pioneers Festival – catapulted his project to the forefront of startup successes. The mySugr team takes up permanent space in Sektor 5 and Frederik introduces them enthusiastically. The R2D2 USB hub that sits triumphantly on the desk is the only indication that Debong’s interests extend beyond his app. 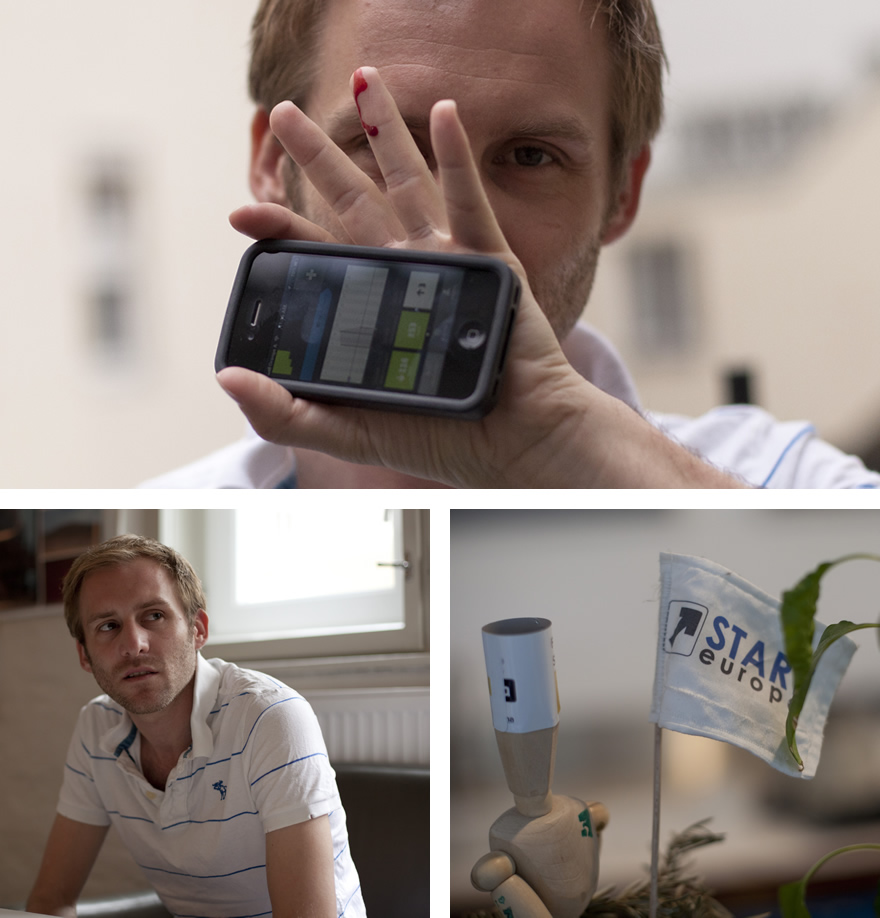 Blood on the dancefloor: Debong presents his new app mySugr, dedicated to “eat Diabetes” – before that he was engaged in StartEurope.

[definition type=’wikipedia’ title=’Diabetes’ text=’Diabetes mellitus is a group of metabolic diseases in which a person has high blood sugar, either because the body does not produce enough insulin, or because cells do not respond to the insulin that is produced. This high blood sugar produces the classical symptoms of polyuria (frequent urination), polydipsia (increased thirst) and polyphagia (increased hunger).’]

After studying medical computer science at the University of Vienna, Debong worked on a diabetes project at the university which he now describes as “two years working to solve the wrong problem.” The goal of that project was to invent plugins that could more effectively import the data generated by personal blood glucose monitors.  Eventually however, he realised that simply streamlining data processes wasn’t going to have nearly the impact of making the same data more useful by placing it in a broader context.

Switching gears, Debong got involved with a venture capitalist whose input helped him to begin piecing together this vision. “I’m not a big planning person, but I like to solve all the problems.  This works great until there isn’t a next step – that’s what I learned from working on the wrong problem.” From Debong’s perspective, the mySugr project began with this failure.  When asked if he regretted the two years of work at the university, he shrugs and says, “Sometimes that’s how long it takes to get to an ‘aha’ moment.” His real regret is the time he missed with his son and his wife, whose support has been central to his focus and success.

Moving forward after the university project, Debong co-founded STARTeurope in 2009, a community for entrepreneurs designed to help them plan, implement and promote their visions. Though he is currently less active in the venture, it typifies his desire to motivate and empower people with good ideas but who lack the focus or knowledge needed to get them to market.  By his own admission, Debong suffered from a lack of focus, and recognising that he wasn’t alone, STARTeurope seemed like a good way to help others while helping himself. While it would have been easier to focus on his own project, he felt that reaching out to others was just as important. When it came to mySugr his thinking was the same – diabetes is a burden; how can I make it easier not just for me but for all of us? 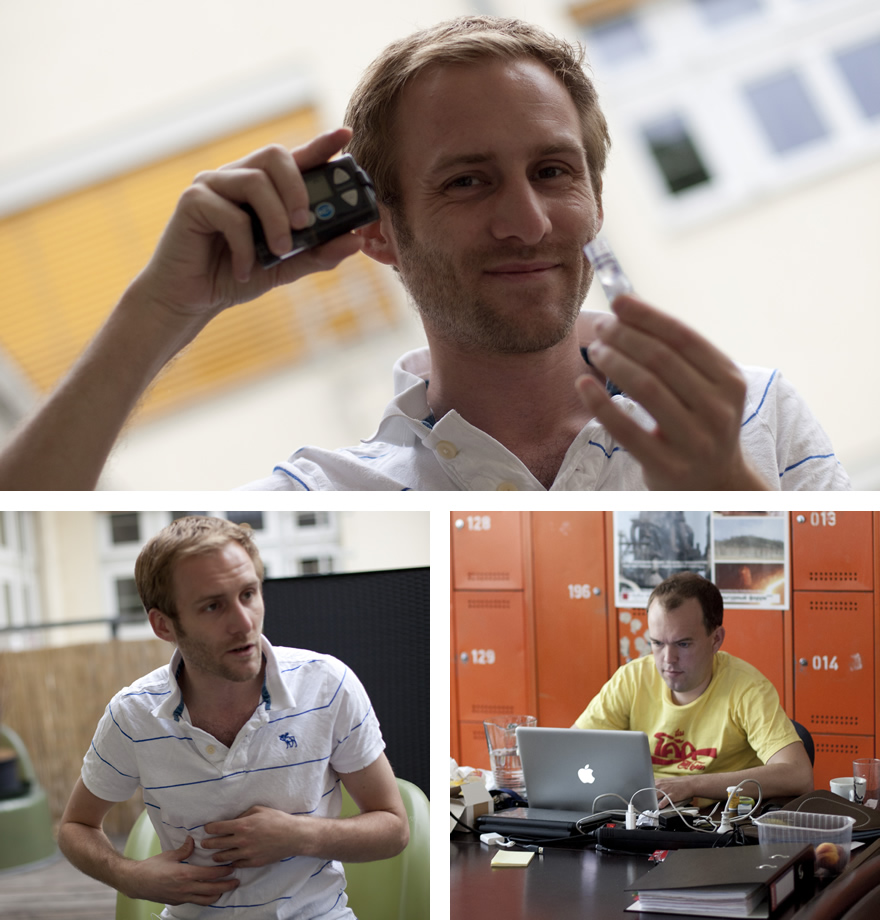 Debong: Diabetic since 1984, steadily cabled. He has to take special care of his pancreas like his Co-Founder at mySugr Westermann.

Diabetes affects the lives of not just its victims, but also parents and friends. Debong’s father worked long hours in the clothing business, leaving his mother with the 24/7 job of ensuring her son was safe from his own pancreas. For diabetics, the constant need to monitor food intake, blood glucose leves and insulin intake can lead to what Debong describes as a ‘diabetes burn out’. The relentless grind makes it easy to become complacent, and in time this complacency can become life threatening. After taking over responsibilities from his mom, Debong realised just how taxing managing his diabetes was and admits that even his diligence has its limitations. “We need all the help we can get,” and by simplifying monitoring and, more importantly, making it interesting, Mysugr responds to this need. While the app focuses on issues related to the illness, Debong understands that medical technology is usually bland and really needs to become more people friendly. A self-described computer game addict, Debong drew on that experience to make the app fun to use. “Every log you make gets a reward of points, x number of points a day you get a gold star, and with enough gold stars, you get to beat the Diabetes Monster!” He wants the app to become a personal extension of the user because in his eyes, ‘the more you relate to the information, the more you take ownership of it and the disease.’ This issue of relatability is present throughout his business model with every his own response and name to his interactions with users. It is important that users of his app know they are not alone, and that he’s the same as them.

Inspiration? Richard Branson’s “That would be nice, let‘s do it”

Like many entrepreneurs, he counts Richard Branson as one of his inspirations and finds solace in Branson’s attitude of, “That would be nice, let’s do it!” Debong talks openly about the animosity the tech and the business worlds have for each other with businesses not grasping new ideas and techs not understanding how to bring them to market. Coming from the tech side, he is quick to admit that he doesn’t know everything and is passionate about surrounding himself with people that not only know more than him but also share his desire to create something simple yet life changing. “You have a choice – what impact do you want to make and how can you achieve it? Work on a problem that fascinates you. Develop the world in positive way.”

Having invented the only diabetes focused med tech officially recognised as a CE medical device, there’s no doubt that Debong is playing his part.