“Connecting the right people with the right opportunities” 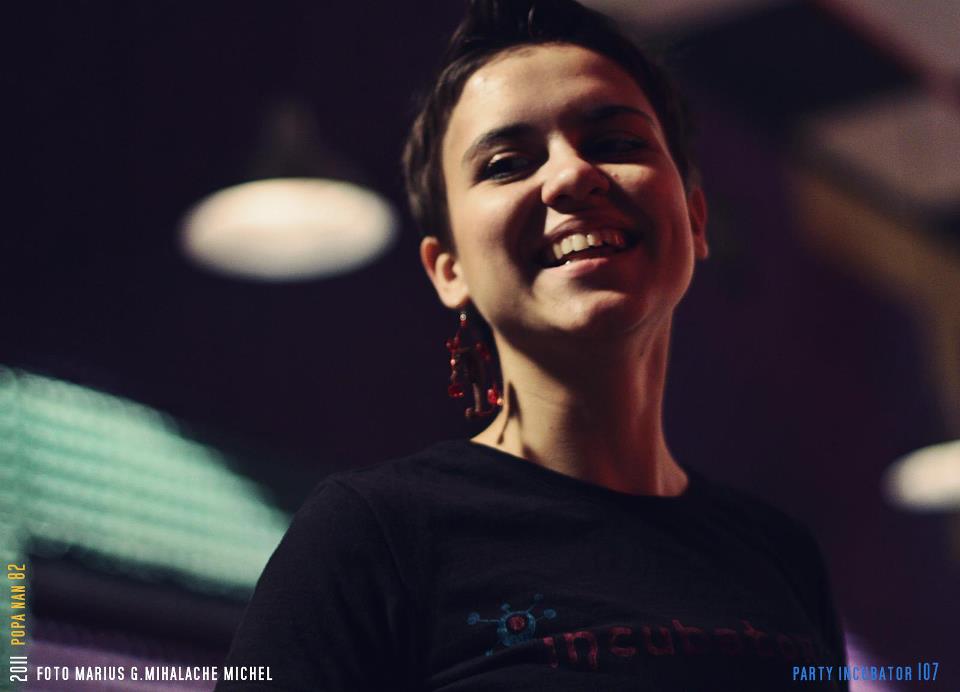 Part time community activator with a local ad agency, part time the heart and soul of Incubator107, Stefana Popa (27) feels she is exactly where she needs to be: “connecting the right people with the right opportunities.” inventures.eu recently sat down with the young Romanian to learn more about what led her to start a social enterprise with the aim of creating an alternative learning space.

By day, Stefana Popa’s attic looks nothing like the place it turns into after work, when a lively crowd of cheerful people transform it into an alternative learning space. Painting, salsa, online marketing, palm reading, personal branding, Linux, baking, Chinese calligraphy, Scandinavian culture, web design, conflict management, Portuguese, speed reading, archeology… if there’s anything you ever wanted to know more about, chances are you’ll find a class about it at Incubator107.

One year ago, Stefana’s life took a different turn, when she decided to leave her office job at the Romanian Cultural Institute to focus on what was then an experiment: getting people together at her house to learn from and teach to one another.

When she started out on the journey of what later became Incubator107, Stefana did it with the purpose of offering people a space to learn and share what they’re truly passionate about. But her secret wish was that people would end up finding and honing new hobbies that may just end up changing the trajectory of their careers.

Since she had long searched for ways and places where she could attend various workshops and trainings, Stefana knew she wanted to avoid the two things they all seemed to have in common: being somewhat unpractical and not being interesting enough to bring out a spark inside. 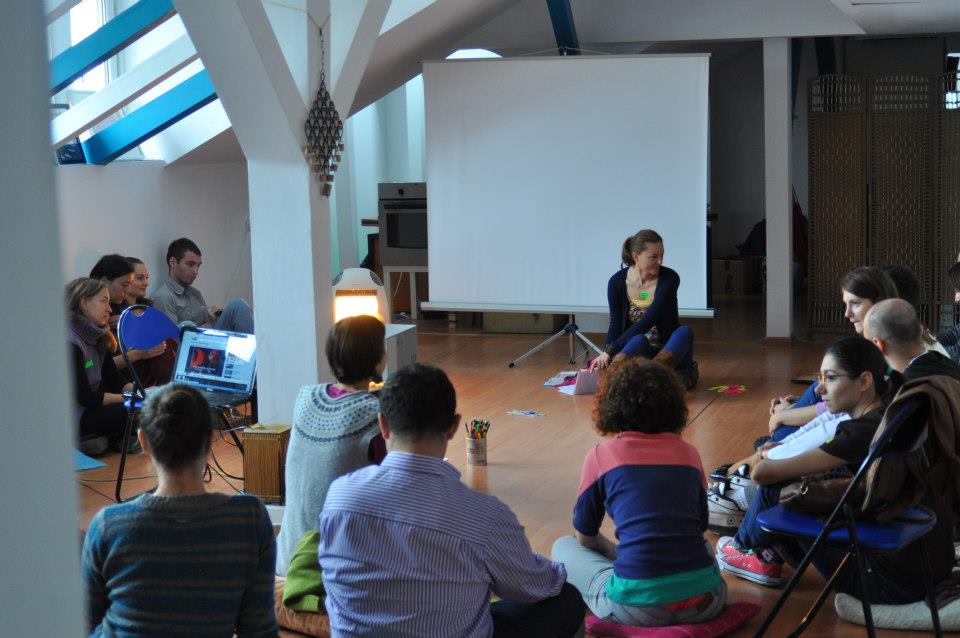 Photo: Incubator107“I wanted to teach people how to have hobbies”

The initial idea for Incubator107 was not to turn into a big project: “It started out as just a few evenings with friends when we would teach each other various things. We posted a question on Facebook asking people what they would like to learn more about and what they could teach others. The answers were very diverse – and some were even quite unpractical. Of course, we couldn’t accommodate all of their wishes, but we took it as a good sign that there was some interest and that’s how it all started.”

In the beginning, there were only a handful of workshops, but eventually it grew into a social enterprise in its own right. The growth was organic, as Stefana didn’t want to push things too far too fast. Apart from being an innovative concept altogether on the Romanian startup scene, any sudden growth would have gone against the fundamental beliefs of its founder.

At the heart of it, Stefana wanted Incubator107 to be about two things: a wide array of diverse and practical workshops and affordability.

“I didn’t grow up being utterly obsessed with money and the idea of letting people pay what they could was very appealing. So we came up with the system of suggested donations where people could pay between 10 and 20 Romanian lei (approx. 2 to 4 euros). Half of the amount would go to the trainer and the other half would cover our administrative costs. There were some cases when people gave more than the suggested amount, but they were rare. Usually those who gave more were not our core target attendants, they were more like one-timers.”

Although a firm believer in keeping their workshops affordable, Stefana had to tackle the money issue very early on when she had to make some on-the-go changes in an effort to keep Incubator 107 running, by slightly increasing attendance costs:

“I had this revelation during a conversation with a friend who asked me how much we usually pay the artists who play at our parties. I told him that we usually convince them to do it for free. But he said ‘Well, if you’re not paying the artists, how can you call yourselves promoters of the arts?’ This made sense. So we made the decision of raising the amount of our suggested donation by 50% in the hope of supporting our trainers and keeping our expenses at bay.”

Stefana also made the financially-savvy decision of extending the incubator’s services to corporations. So far, they’ve hosted workshops (and workshop marathons) for Orange and Ubisoft, and have been involved in the Grolsch-sponsored Experience Hotel, which was set out as an experiment meant to test the relationship between time and creativity.

Although the incubator is currently run by a team of just three people (Stefana and two of her friends), one of its staples is the growing community that’s built around it. In the era of social networks and hyper-connectivity, this is not too hard to grasp. After all, social media has been known to foster groups and build communities almost like any other medium.

“We’re happy to have managed to grow such an eclectic community of people; they have different backgrounds and their ages differ a lot, but all are open-minded and want to keep developing. It’s amazing that, after our workshops, some of them remain friends and even go out together.”

There’s a particular sense of power in bridging relationships across a community of like-minded individuals. When relationships form and grow, they lead to a level of commitment that can propel them further up.

When talking about their community, Stefana has a quote in mind from Seth Godin’s book Tribes: “Think of your community and give them an action plan, because find your passion is never powerful enough. That’s precisely what we’re trying to do.”

Not anyone can deal with building an innovative – and working – model of a social enterprise. But Stefana seems to thrive on it: “The fact that it’s never been done before only means that someone has to start somewhere. And if you look really close, each business is different, anyway. We don’t follow any model and didn’t aim to copy anyone’s patterns. This gives us incredible freedom.”

This freedom is manifested in how Incubator107 recruits its trainers – or craftsmen, as they are called by the team – which ended up shaping a large part of what the incubator’s innovative model is all about. Stefana makes a point to not select them based on their academic records and formal qualifications: “A trainer can be anyone with a certain level of knowledge on any given topic and the willingness to teach about it. We don’t request that they hold an academic degree or a diploma. They just need to be willing to share what they know, what they’re good at or what they’re wildly interested in with the rest of us. We ourselves are at a point where we experiment a lot and so we welcome diversity.”

Although Stefana didn’t set out to build Incubator107 into a franchise, things have certainly grown in that direction. Once the first local “branches” were opened, she quickly developed a working model that could be applied, without there being the need of a great deal of input from the Bucharest team. As she puts it – “the beauty of the Incubator107 franchise is that it can be implemented anywhere”.

The concept is already functional in three other cities in Romania (Iasi, Cluj, Timisoara), with the forth one recently opened in Brasov, which had a spectacular evolution with more than 200 people showing up at the launching party.

Stefana smiles as she realises that the expansion basically started out on a dare. “Ever since the incubator’s inception, my father kept telling me that it won’t amount to anything unless I take it to other cities. And I did. After that he said it wouldn’t really work because the local teams would be completely dependent on us and would suck us dry. So, I developed a franchise model that gives them complete independence. And right now, the next big challenge is to go international.”

Building an international franchise is Stefana’s goal for Incubator107 in the coming year. They’re already thinking of expanding nationally to five new cities (Oradea, Ploiesti, Tg. Mures, Craiova, Sibiu), but what she really wants is to open up four new international branches; the first ones are set to launch in Budapest and in Chisinau.

“Of course, our really big wish is to go to a large capital like London or Paris. That would definitely help open new doors and build a stronger network. But we’re taking things one day at a time.”