Get your tech on! 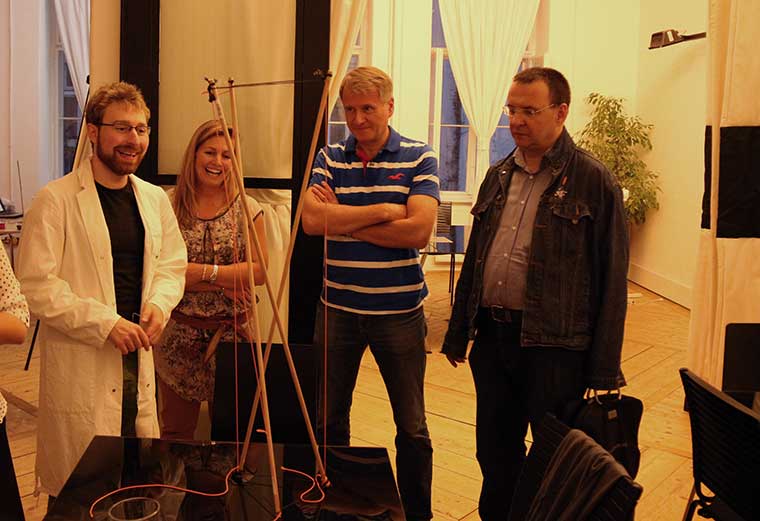 If you ask me, technology is not for everyone. If you ask some of your friends, they might say just the same. Well, depending if you get to talk to the not so tech-savvy ones. If you ask Manuel Laber, you’d get a completely different answer.

Laber is the founder of Vienna-based Laber’s (obviously) LAB, whose goal is to teach people how technology can be used to find creative and inexpensive solutions that will, in turn, create social impact. “Our goal is to bring together people from technical backgrounds with people who have zero technical skills or knowledge whatsoever.”

Laber’s LAB teamed up with HUB Vienna and Dreamups to organise the Maker Meetup on 26 August – a two-hour evening event, which introduced participants to an alternative way of thinking about technology.

Getting rid of all complexities

The philosophy behind Laber’s LAB is that technology is best understood when broken down to its basics. Have you ever considered it possible to build a prototype of a windmill tower? Me neither. But it turns out it’s doable.

“Tech is not always about fancy, trendy stuff,” said Laber. “It’s also there to create things that really matter.”

As if you were in Ghana

The trick is to know not just what to build, but how to build it. “Take Ghana, for example,” Laber shifted the audience’s focus to the third world. “While they have plenty of sunlight, water and wind, power supply is not a given. So how do you build the pillar of a windmill with local materials only, and without the use of any special tools?”

Tensegrity anyone? If you haven’t heard of it, you sure aren’t the only one. 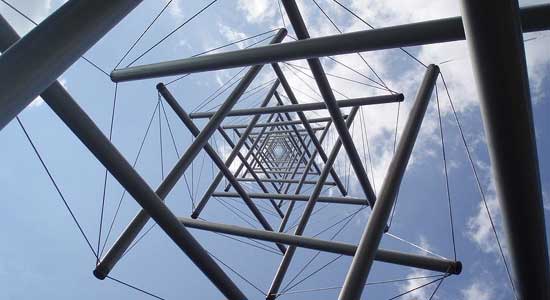 Photo credit: Flickr, Beth Scupham, http://bit.ly/153f9AKHaving said that, Laber did a commendable job breaking it down. Essentially, he said, all you need to create a tensegrity structure is bars and ropes. Build a structure with a triangular base, twist it around until the top rotates one full figure, and connect each two corresponding points between the upper and lower base until the tension between them is strong enough to balance the entire structure. (Laber was certainly better at explaining it, so do use the photo on the left for reference).

What made the concept easier to grasp was the practical workshop in the middle of the session, where teams of 4-5 people got to build their very own tensegrity structure. Spoiler alert: Although it sounded quite straightforward, getting things in balance was a challenge. The result, however, is what counts and that is – a lightweight and rigid structure. And of course, the satisfaction of having built something yourself.

Make a robot. Then make it walk.

By now you probably get the idea of why it’s called a Maker Meetup. The second part of the evening was all about “low tech meets high tech”.

“The point of today’s exercises is to see how technology can be used in different contexts,” saidLaber. While you can use tensegrity to build a windmill pillar with limited resources, you can also use it together with high tech to create a robot that walks. Now that’s cool, isn’t it? Yes, but it’s as cool as it is challenging.

For somebody with little to absolutely no previous tech knowledge, getting to see a structure move with the help of the Arduino microcontroller was both impressive and confusing. The time may have been a little too short for all the why-s and how-s to be answered, yet it would be unfair to say that quite a few from the audience didn’t get the gist of it. The Arduino model did indeed spark a discussion between Laber and several of the participants.

For the ones interested to follow up on this week’s Maker Meetup, you should know that the team is planning to organise further similar workshops. We’ll keep you posted about the dates!

If you are looking for an even bigger tech challenge, the Arduino-bootcamp might be just the place for you. Two of those will be hosted by the end of 2013 – one in Salzburg on 28 September, and one in Vienna on 19 October. Make sure to secure your spot!