eDay 2013: Getting IT Together 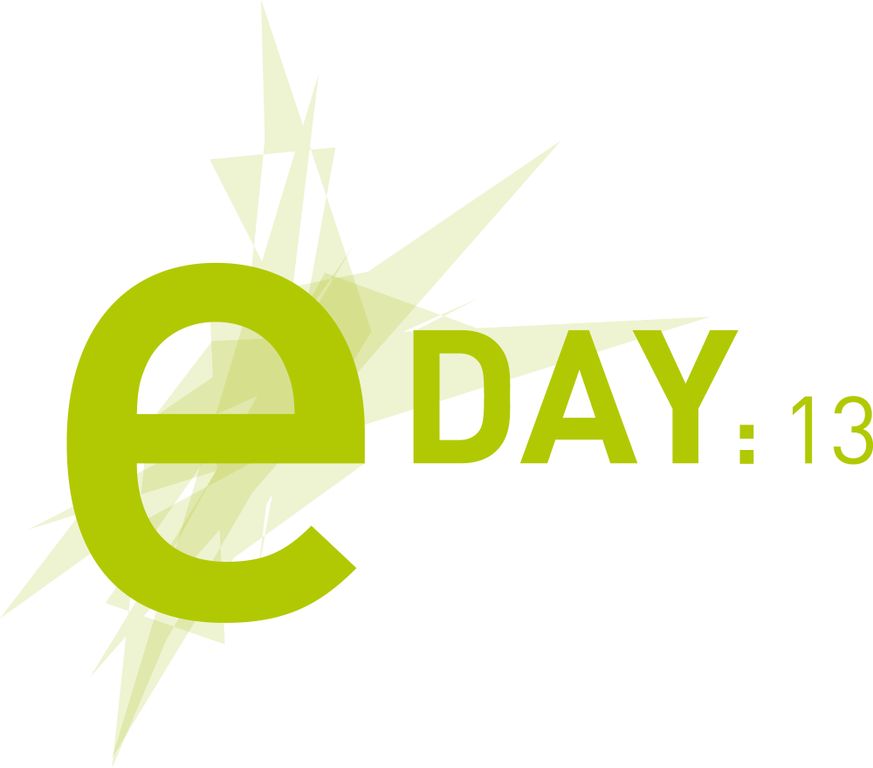 A welcome whiff of spring weather came through Vienna last week after a cloudy, snowy winter.  On Thursday, 7 March, the temperature peaked at 19°C and the sky was mostly sunny, which may explain why this year’s eDay at the Austrian Economic Chamber (Wirthschaftskammer Österreich, WKO) seemed a bit sparsely attended. With 2,700 people attending, the free one-day event held for the 14th time in its history had roughly 1,000 fewer visitors than last year.

Perhaps another reason why more people didn’t show up in person is because each programme was video-streamed live online, allowing virtual “attendance”. To emphasise the digital aspect, a mobile app developed by Bernd Gruber and Vinzenz Weber and featuring Gruber’s indoo.rs technology helped visitors navigate through eDay’s venue and programme. Moreover, questions posed through Twitter (#eday13) were put to the presenters. Even WKO’s president, Christoph Leitl, opened and greeted the conference virtually, via live video-feed from Berlin. Leitl highlighted Austria’s relatively high development in termsof e-government, citing the Austrian Business Service Portal (Unternehmensserviceportal) as a prime example. More concrete information was to be found at the various presentations, discussions and workshops held in five halls.

The event focussed on themes of collaboration: teamwork, network, and co-work. Topics ranged from online/mobile marketing and e-business legal issues to age-diverse communications,  as well as a host of other e-commerce issues. Attendees could browse through the exhibitors’ stands and get one-to-one consultations from various WKO IT-branch and Telefit Roadshow experts.

The panel discussion Austrian IT Goes International: Tips and Tricks for your international success   (in English) touched upon an unofficial theme of the day: why many Austrian IT entrepreneurs should go abroad to get what they might not find at home. Representing Austrian startups who have benefitted from going to Silicon Valley were Angela Feiner, of Graz-based Up to 11 (creators of sms.at and mysms) and Vincenz Lichtfried of LV7 (creator of local-based search engines like Allmynews and essenfinden.at), both of whom participated in the Go Silicon Valley! programme (read more about GSV in our previous article). Takeaway message: the Valley is great for expanding horizons, networking, getting product feedback, and partnering, but don’t go there to find technical talent – there is too much competition.

Archify‘s Gerald Bäck explained why he chose Berlin over his native Vienna, basically saying that venture capital won’t value you highly if you plan to stay in Austria.  Interestingly, panelist Paddy Cosgrave (founder of the prestigious Dublin Web Summit) disagreed.  Though he believes it’s important for entrepreneurs to “leave their comfort zone” and get out to Berlin, London, or Silicon Valley to expand their horizons, he claims there are many companies who have grown and raised capital without having to move.

Bäck said that while Austrian public-sector investment in startups was quite good, especially for seed money, the Austrian eco-system is lacking later-stage funding from venture capital. Even though it’s too late for Archify to consider coming “home,” Bäck called for greater competition, cooperation and communication between Austrian business angels and investment groups.

Mike Borras, a U.S. citizen who co-founded Tupalo in Vienna, added that the Austrian ecosystem is developing rapidly, though it’s not quite there in terms of private investment. He thinks that it only needs a few success stories to get some traction. Whether Austrian startups succeed at home or abroad, he calls for them to bring it back home to re-invest and mentor the next generation, locally.  Putting action to his words, Borras co-hosted a Pub Summit with Cosgrave later the same day (read about it here). He hopesthat such events, the emergence of co-working spaces, and early-stage investors like i5 and SpeedInvest – will help solidify Vienna’s rapidly emerging ecosystem, which he said is already drawing international talent, especially from its Eastern European neighbours.

Addressed on the risk of brain drain, WKO’s Rafael Rasinger Amilivia realises that encouraging international exploration through WKO programmes like Go Silicon Valley! and similar initiatives to go to Cambridge and Berlin may cause Austrian firms to relocate abroad. However, to him the goal is rather to have Austrian companies keep their operational base at home while forming partnerships or subsidiaries abroad. In terms of GSV’s record, so far so good!

Can’t we all just get along?

An example of how the lack of cooperation might have a negative effect on the startup ecosystem was raised by a question from an audience member from the Pioneers Festival’s organising team. He asked Cosgrave why this year’s Dublin Web Summit was scheduled on the same days as Vienna’s own Pioneers Festival (read our coverage of last year’s festival here), 30-31 October, thus forcing interested parties to haveto decide between the two events. Cosgrave conceded that this was not an ideal example of working together towards the common goal of growing the European startup ecosystem, but that DWS had a three-year “tradition” of being held on the last weekend in October. (Rumour, however, has it that Cosgrave had previously expressed himself in slightly less diplomatic terms on the issue towards the Pioneers’ organisers). Besides, according to Cosgrave, “the fundamentally most important reason” for a non-Irish startup “to come to Dublin, when it’s cold and wet at the end of October, is to get drunk!” Well, at least to attend the diverse networking events held in Dublin’s pubs in between summit sessions

Criticism of Austria’s startup ecosystem was also brought up in another podium discussion on alternative financing trends for young entrepreneurs (in German). Markus Prinz, CEO of meinkauf.at, and Daniel Horak of crowdinvesting-platform Conda lamented the difficulties of getting capital from banks, particularly for younger entrepreneurs without previous experience or own capital. Even if risk capital for young enterprises merely rose to the average EU level, it would enjoy a fourfold increase, according to Markus Roth, board chairman of WKO’s Junge Wirtschaft (“young economy”). Yet, Roth is optimistic that “we, as young businesses, will revolutionise the system and change will come soon,” perhaps in the form of new company structures like the mini-GmbH (see our report from November) or small stock companies.

Sharing the stage was 2012 Austrian Business Angel of the Year (see our coverage of the event), Werner Wutscher, who called for more “smart capital” from private and public sources. He would like Austrian big business to invest more capital and expertise in small entrepreneurs. Wutscher and the others gave credit to public seed-funding in Austria but criticised its somewhat retrograde social policy towards startups; its legal barriers to entry – especially the high owner equity required to form an Austrian GmbH and its limitations on allocating ownership capital – and Austria’s relatively high tax and personnel costs.  In developing their crowd-investing platform, the Conda founders have also run up against bureaucratic difficulties. The platform was originally said to launch on 1 March (see our feature here), but so far hasn’t started operations because they hadn’t yet received authorisation to run their financial consultancy.

The day’s events were capped at an evening ceremony with the awarding of Austria’s state prize for Multimedia and e-Business – the most prestigious state award for domestic IT firms. The Salzburg-based company Elements, creators of the content-management system Pimcore, won the main prize.  No strangers to prize-givings, video platform Whatchado from Vienna won in the category Knowledge, Learning, Reporting and Information.  LineMetrics, a Linz-area startup that offers a low-priced solution for collecting and analysing machine data, received a separate prize and a 3,000- euro award for most-promising new business. A complete listing of prize finalists in each category can be found here.

All of the live streams from eDay 2013 are archived and still available online, so it’s not too late to tune in.