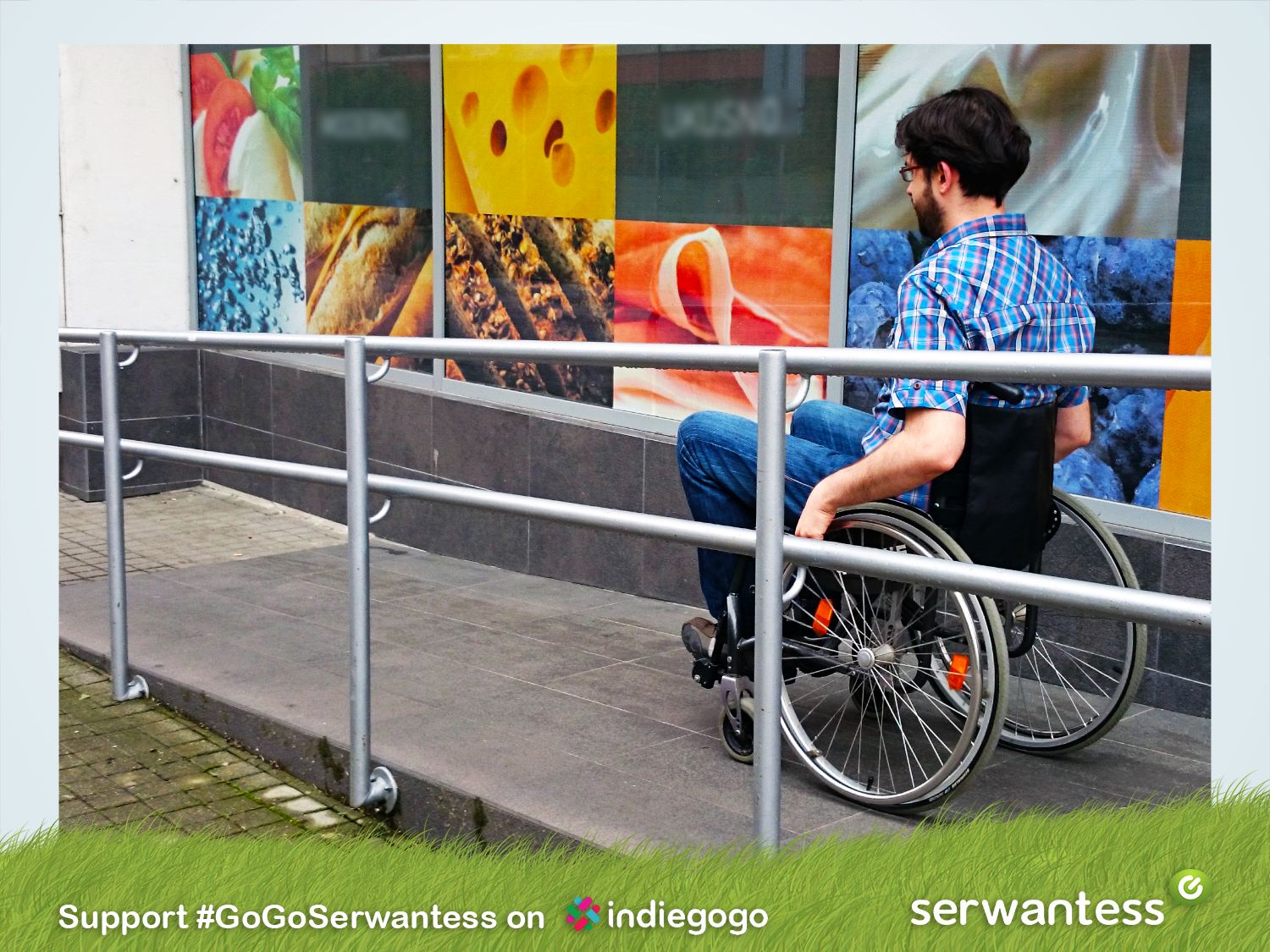 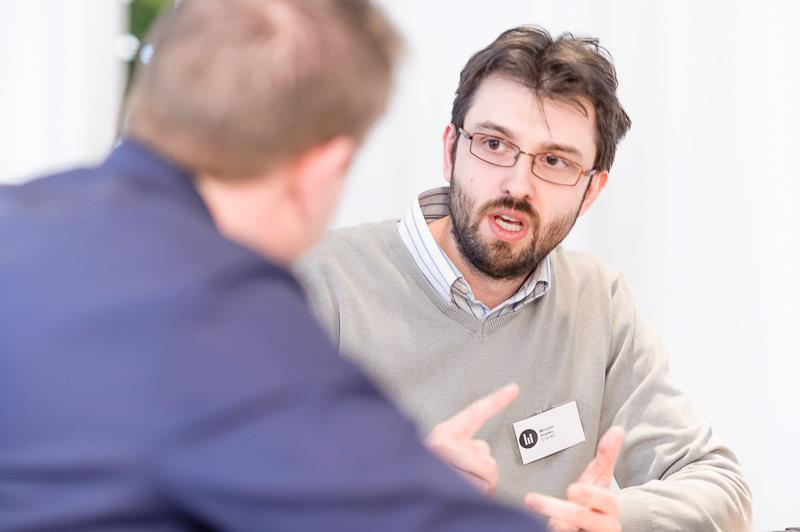 It is Miroslav Vrankic’s (37) second day in Vienna and he is on a rather unusual mission: he is here to record as many German voices as possible. But they shouldn’t just say anything. He hands each native speaker three pages of simple commands for them to read out loud. From eins, zwei, drei to einschalten, ausschalten.

The Croatian is collecting voice samples for an electronic assistant called Servus. The little silver box, about the size of an external harddrive, allows people with a disability to manage their household by using their voice only. Users can control their appliances such as lights, TV, radio, and more completely hands-free. Servus (Latin for “servant”) is designed to be speaker independent, which is why Miro and his team are traveling and recording hundreds of voices – so even if the user has a cold, the system will recognise the voice and execute the demands.

We met him at the HUB Vienna and managed to talk to him in between his recording sessions. He seemed relieved to finally be able to sit down. Leaning back in his chair, Miro clears his throat and adjusts his glasses, ready to tell his story.

Merge your skills with your ideals

When Miro completed his Ph.D. in engineering at the University of Rijeka back in 2008, he wanted to do something meaningful with it. “Sometimes you are doing science just for the sake of science and lose touch with the real world.” He wanted to combine technology with entrepreneurship but there was another personal requirement he wanted to fulfil. “helping people was important to me.” 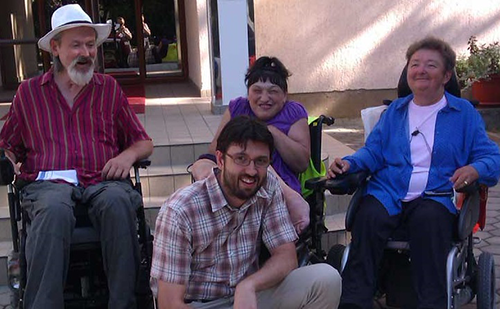 Photo credit: Servus, http://on.fb.me/15hl60KThe idea for Servus came somewhat unexpectedly. “I started volunteering and my first assignment was to help a man in a wheelchair,” Miro recalls. “I was going to help him use a computer but because his hands were partly paralysed he was very slow.” After this experience, it dawned on him: What this man needed was voice control to use his computer. “The idea was to use voice control not only for your computer but the whole house.”

“Merge your skills with your ideals,” a poster read at the university and Miro declared it his motto. “I think that’s what we managed to do – we merged our technical skills with the ideal of helping disabled people,” says Miro.

When feedback matters the most

After getting eight other engineers onboard and six months of “developing, developing, developing” their first prototype was installed in April 2009. “We received very useful feedback from the initial users and realised that Servus had potential for the market,” says Miro.

One of their first users was a woman, who had been completely paralysed after a car accident. After Servus was installed in her apartment, the first thing she did was ask the system to turn on the light. And it did. She sat silent for a few minutes, mind-baffled. Another woman, tied to the bed after an accident, started crying when using the service for the first time, Miro tells me. After seven years, it was the first time she could do something on her own. “Seeing the happiness in their eyes makes everything worth it,” says Miro. But it also means more independence for the whole family. “They don’t have to be around all the time. Life is much easier for everyone involved.” 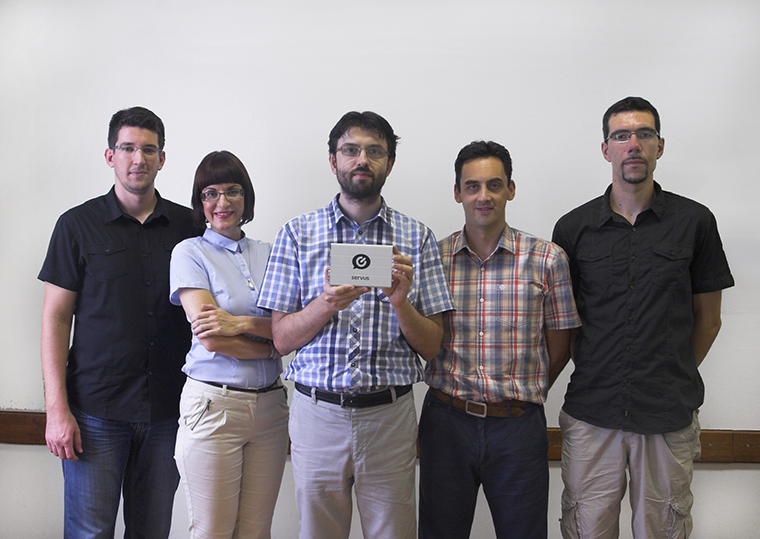 The E-GLAS team with Servus Photo credit: E-GLASThe team founded E-GLASin 2009 and started to install Servus at several homes in Croatia. It may sound like installing Servus is a major undertaking but in fact, it’s very simple. If you want to control your TV with your voice, it only requires a little tweaking of the remote control. The software remembers the controls for each channel and resends the codes to the TV, just like if you were pressing the button. The same goes with light switches, phones, air conditioning and other appliances in a regular household.

E-GLAS has been mostly bootstrapped but has also received some government grants and donations in the 1.000 to 2.000 euros range from their users. They completely changed their business model as receiving donations is a critical issue in Croatia.

Now, the startup is charging an upfront fee of 300 euros for the system and its installment. Monthly subscription is about 30 euros and includes lifetime guarantee and technical support. “Our goal is not to make big money,” says Miro. “Our impact is measured by the number of people using Servus in their home.” But money has to be made somehow. The team expects to receive an investment by the end of the year but that’s still up in the air. “With sales and investments, we expect to break even by the end of 2014.”

The startup’s big incentive is to get partnerships in all the countries they are operating so promotion and support are key – as for any other social impact startup. “We are making this thing affordable so I think it’s fair to expect that the community can promote our service,” says Miro.

E-GLAS has partnered with two companies in Austria that help them with distribution. They sold their service to a distributor in Austria. Platus Communications is specialised in products for the disabled and once it sells Servus to a customer, IT company Castelli Networks takes over, providing the technical support and installing the service.

But the startup is also working on getting themselves “out there”. After joining the Investment Ready Program in Vienna with the help of HUB Zagreb earlier this year, they were invited to the Impact Days in Amsterdam and received a scholarship for the SOCAP conference in San Francisco (read more here).

Miro’s plan is to bring his product to people with disabilities all over Europe before expanding to the US. Until then, he’ll have to record many more voices. But after listening to him talk about Servus, he doesn’t seem to mind. He can’t wait.