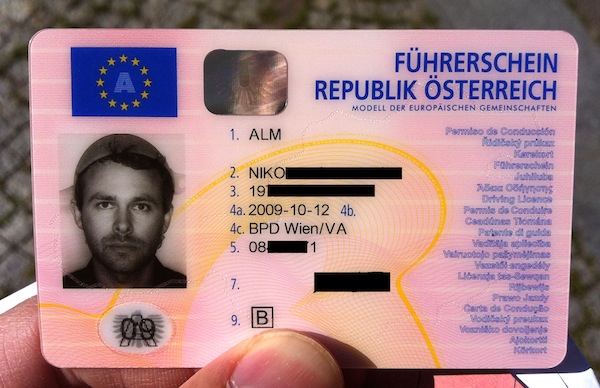 Meet Niko Alm, the man with Austria’s most famous driver’s license. Mostly known for his political activism, we find that the talents of the advertiser and publisher go beyond generating publicity around his own persona.

Niko Alm welcomes us at the Super-Fi headquarters in Vienna’s fourth district with plastic wrap covering his right lower arm. This is the man who made international headlines from the BBC to Spiegel last year after he won the right to use a photo showing him with a pasta colander on his head in his driver’s license – for religious reasons. But we didn’t come to talk about Niko’s political activism as an advocate for the separation of church and state. We want to get to know the entrepreneur beneath the noodle strainer.

We are led into a glass encased meeting room whose only flaw seems to be what Austrians – in a not politically correct manner – like to refer to as a “Russian chandelier”: a naked light bulb in a socket. The sleek office, which the creative agency Super-Fi moved into earlier this year is a far cry from its original home base. Located just around the corner, the cluttered co-working space houses several media related companies of the Super-Fi Mikromischkonzern – literally the Super-Fi Micro Conglomerate – staffed with mostly twentysomethings behind Macs – cliché much?

They All Look The Same 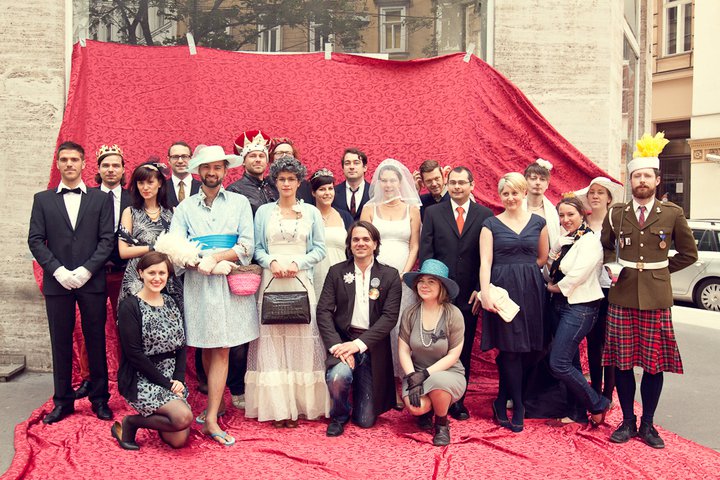 A Casual Royal Wedding Friday at the Super-Fi Mikromischkonzern (note King Niko) © Super-Fi“We basically all look the same in our office”, jokes the 37 year old, who has donned his best Helmet t-shirt for the occasion. “After all, I can choose who I work with”, he proclaims not entirely tongue-in-cheek. Niko, who founded Super-Fi as a self-financed creative agency with three friends – Iris Kern, Christof Hofer and Manuel Fronhofer – in 2001 makes no effort to hide the fact that he enjoys his role of CEO holding 45 percent of the company’s shares. In 2011, Super-Fi was Austria’s third biggest digital media agency with a turnover of about 6 million euros and currently has 75 employees. So, how does one succeed on the cluttered media market?

“Back when we started Super-Fi, we were all in our mid-twenties and actually believed that we were doing something completely radical, which – of course – we weren’t. We didn’t even consciously look for a niche, which might actually have been a mistake. We simply took all of the orders that we could complete and did it our way.”

That still doesn’t quite explain how the agency could grow into a company group encompassing twelve independent businesses in the fields of media production, advertising and web development within ten years. Interestingly, some of the companies were started by former employees with entrepreneurial ambitions, which Niko supports – in return for company shares. 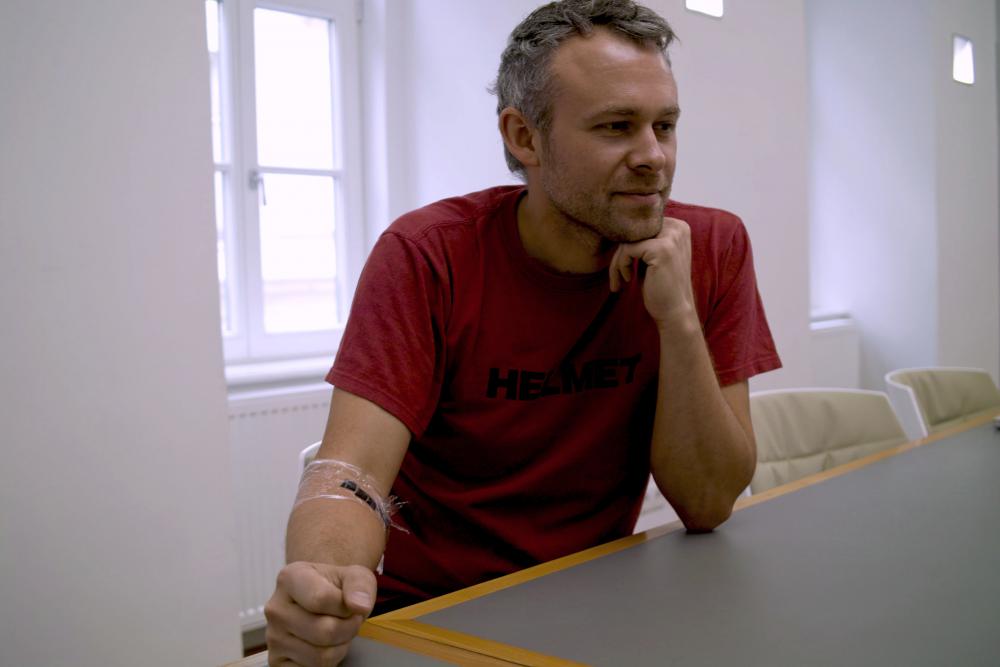 The ink is still drying: A tattoo of his company’s logo shows that Niko takes pride in what he does – and that he’s serious about branding.

Sorting Peas And A Subconscious Strategy

As for the origins of the adman’s personal entrepreneurial drive, it almost seems like there was no other choice. Growing up the son of a self-employed father, Niko tells us that to him there simply was no plausible alternative employment model to starting his own business. As he shares recollections of his previous work experience – sorting peas at a frozen food factory (for about two days), working as a journalist, graphic and web designer – he emphasises the freedoms he enjoys as CEO: “I like doing whatever I want to do. Of course, I work for our clients but I can choose what I work on, who I work for, when I work and who I work with.”

Getting back to Super-Fi’s evolution, Niko points out, that if they had been following a strategy at all, it was a subconscious one – “if that isn’t a contradiction in itself”, he adds. “We have a completely opportunistic and generalist approach which has worked out for us. The only thing we do have is a good intuition for a certain lifestyle or target group, which is reflected in our media products. I think we’re pretty good at getting that across.”

Much in the same vein, he identifies the fact that he is a decent all-rounder as his biggest talent: “I’m not particularly good at anything but I’m second or third best at a lot of things.” Accordingly, he dismisses the concept of a USP, “During our startup phase, I was constantly being tortured with questions on what our idea and our USP was. To this day, I couldn’t really say because it’s a stupid question. When I open up a hair salon, the core service is going to be exactly the same as with thousands of other hair salons. Of course, I can pick a clever name and decorate the place in neon colours – then the USP might be about my external communication. But that’s not a real USP in my book. Creative agencies like Super-Fi are ten a penny.” Niko goes on to emphasise that Super-Fi may not even excel at its generalist approach, while cockily adding, “we’re definitely better than average, though, and that’s already enough.”

While displaying a reflected and almost humble attitude on the matter, Niko does take pride in his business. And he’s serious about branding. The mysterious plastic wrap on his arm, it turns out, serves the purpose of protecting a freshly touched-up tattoo showing the Super-Fi logo. “I have another one”, he adds as he pulls up his t-shirt sleeve to reveal the emblem of his first business attempt, Voortekk, which went through a reverse evolution process: first there was the tattoo, then the company. He had set up the marketing agency in 2000 with a friend after they had been approached by a group of investors planning to start an incubator focused on the media and creative sector. “A good concept if a little too late”, he sums up referring to the golden days of new economy, which had just been numbered at the time.

It becomes clear that the outspoken atheist has no problem with coming across as a polarising personality. He is also very much aware of the controversies he provokes. One of them is the prejudice that political actions like the driver’s license stunt or his attempt totake the Atheist Bus Campaign to Austria are part of a scheme intending to generate publicity for his business activities. This, according to Niko would, however, be thinking him more strategic than he actually is. “My political activism has nothing to do with Super-Fi. I do it anyway, no matter whether it damages or benefits the company. In fact, it does harm to us because it deters a lot of potential clients.” Nevertheless, it also seems to help customer loyalty: “Our clients definitely support what I do. I get a lot of backslapping for my activism.”

Does one have to be a control freak in order to do a good job in his position? “I always thought I was one. But I’m actually not. Well, not in comparison to others, anyway.” Of course, as CEO holding 45 percent of shares and supervising 75 employees, having control is crucial. As with everything, it’s about the right balance, as Niko emphasises. To facilitate that, he tries to recruit people capable of taking responsibility, which he believes is much more important to small owned and operated businesses like Super-Fi than to big enterprises.

There also seems to be a sort of company credo: “You could say that we have a set of core values or unspoken rules that have evolved over time and that we – mostly – follow.” When approached about what exactly these are, he thinks for a while to then jokingly reply, “Well, that’s why they are unspoken!”.

We find clues in the company’s informal and slightly unusual corporate culture, as exemplified by an extra holiday for people without religious affiliation or Super-Fi’s take on the Casual Friday concept: At irregular intervals, the team voluntarily dress up according to a common theme, ranging from eighties aerobic wear to the 2011 royal wedding. Niko is quick to point out, that this institution evolved spontaneously and is unplanned. “Authenticity has always been important to us.” He continues, “I can’t sell lies as an ad agency. This doesn’t mean that we don’t exaggerate but I would have difficulty working for certain brands and products. These situations don’t really arise in the first place, though.”

As we continue to discuss a number of themes ranging from the high-brow to the banal, we find out that the entrepreneur prefers cats over dogs, vanilla over chocolate, Star Wars over Star Trek and Adidas over Nike – although, he’s not sure what wearing sneakers in the ad business implies about his persona. And what about his favourite fruit? Quince. The puzzle is coming together…

Any final words of wisdom that he’d like to give to young entrepreneurs? “Don’t listen to what people say as far as business plans are concerned. From the beginning, plan steps that you can take without existential risk. Only plan, what is possible to plan at the time and then take it from there. It may sound terrible, but that’s the only way to do it – at least in the media sector.” With this in hand, we leave the Super-Fi headquarters, slightly proud that we managed not to crack yet another bad pasta colander joke that Niko has heard so many of since last year.