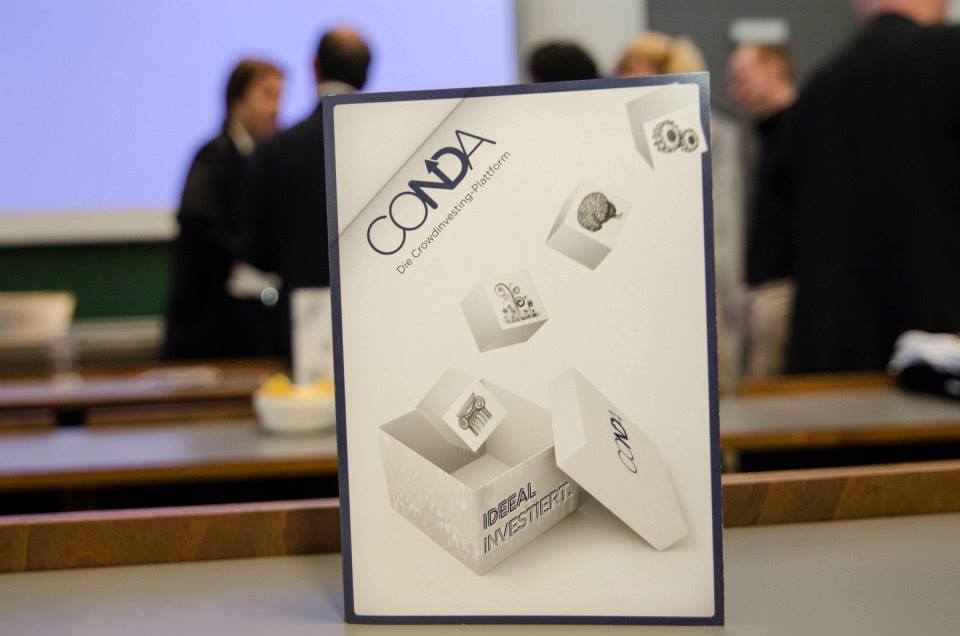 On 21 March, the team of CONDA will be celebrating their first birthday. 2013 has been a successful year, the team believes, during which CONDA managed to gather around 500,000 euros for the ventures on the platform.

Co-founder Daniel Horak says that they managed to form an innovative complement to the Austrian investment scene, apart from traditional financing options for entrepreneurs. When it comes to the question of which of the previous ventures has managed to raise the most capital with CONDA’s assistance, Horak points to the innovative low-carb beer NIXE. They were “up until now our ‘model student’ who managed to raise 150,000 euros within merely a few weeks.” Currently, the restaurant-franchise startup ‘Burgermasta’ is just nearly as successful: “They are also nearing the 150.000”, says Horak. By now, 83 investors have put in some 113,000 euros and prospects have until 16 March to invest.

What’s in the pipeline?

For 2014, CONDA wants to further implement crowdinvesting as a recognised and respected form of corporate financing in Austria. “It is apparent that small and medium sized enterprises and startups need to find alternative methods of financing and we want to establish crowdinvesting as an alternative.” Also, Horak says that the team “want to spread the word that it can be a suitable form of investment for everyone.” The crowdinvesting platform tries to be there for people who tend to invest their money in small enterprises and startups with a national or regional connection.

Horak is keen on noting the difference between the first two expressions, as they are often taken for synonyms: “When people crowdfund, they typically get a goodie or at some time, maybe the finished product. Crowdinvestors, however, are economically connected to the venture and benefit of the future economic well-being of the firm.”

Due to the fact that all the investors are economically intertwined with the venture, even if some invest only 100 euros, they tend to become brand ambassadors and its active promoters. What’s particularly important, Horak noted, is that “when it comes to crowdinvesting, there is always a legitimate business model behind the ventures that are financed.”

While there may not be a clear rule of when crowdfunding or -investing is more suitable for a company, Horak sees benefits in both financing options. That being said, he emphasised the further fostering of crowdinvesting in Austria as CONDA’s main goal for 2014. 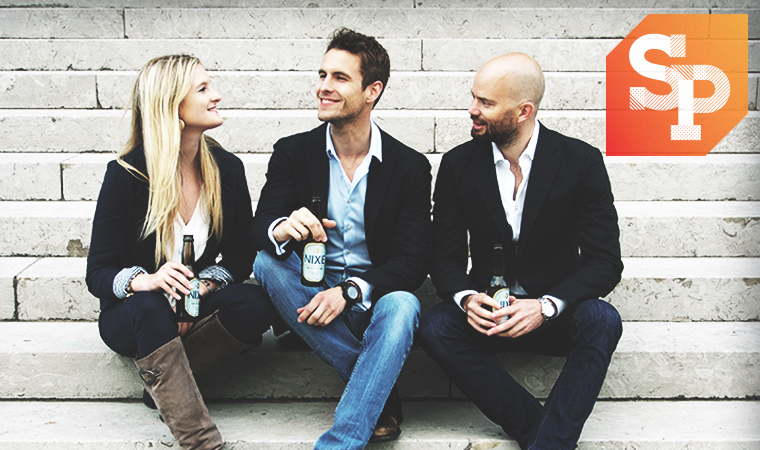 Introduce your team, and tell us one interesting thing about each member. We are…
Constantin Simon, who is also an international model.
Alexander Lauber, who has already successfully launched a perfume brand.
Claudia Simon, who likes to mix her NIXE beer with vodka lemon.
Conrad Simon, who loves weak boarding and surfing.
Markus Zotter, who likes to work out so he can carry around our NIXE mermaid girls.
Elvira Hummer, who loves taking pictures – especially of the NIXE team and mermaid girls. 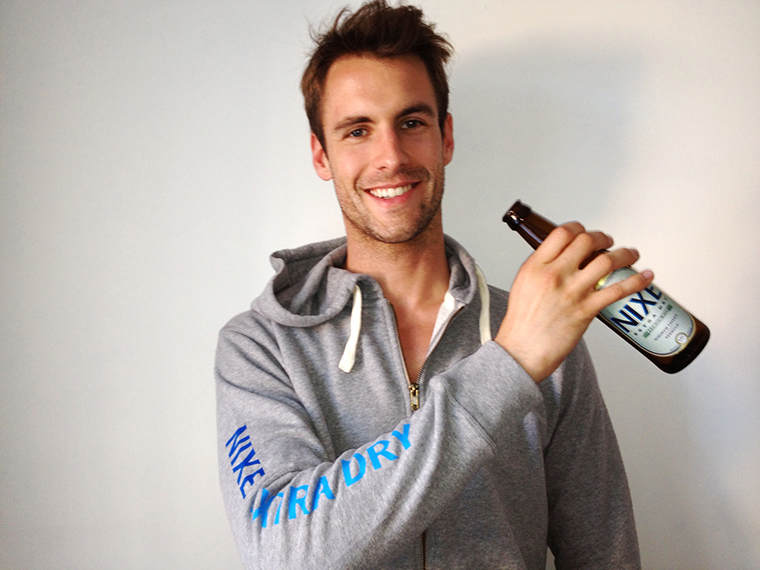 The real pain about starting a business in Austria is…
The high market entry barriers in our industry.

The person that inspires us is…
Richard Branson. We love his attitude about business: “Screw it, let’s do it” – we think it shows what you can achieve when pursuing a great idea with a lot of passion.

The one app/service that we couldn’t live without is…
Dropbox because it distributes the data within the team – from anywhere at any time! 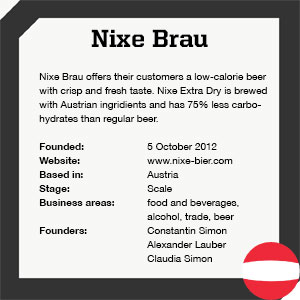 Our inside joke is…
We like making dualities that rhyme with our slogan “Lieber fett als dick” (“rather drunk than fat”).

You might not believe it, but we…
Don’t drink any beer before 10am.

We’ll call ourselves successful when…
It is common to order a NIXE at any pub or bar.

The startup we really want to see on inventures’ Startup Pick is…
poleit.net

Visit nixe-bier.com to get in touch. 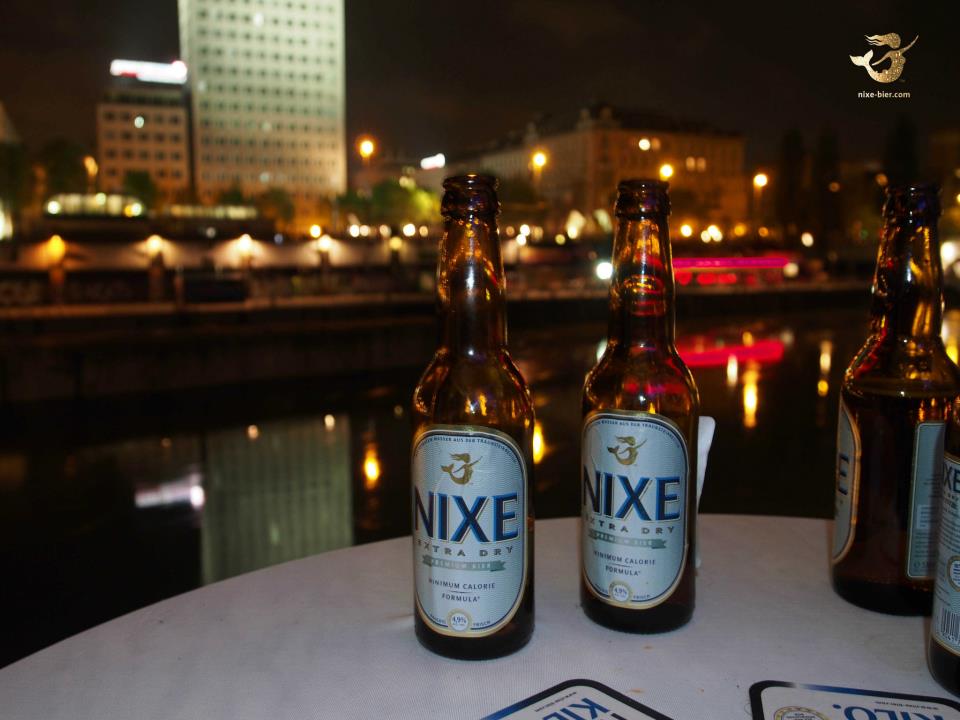 You can’t hide from innovation. Robots, search engines, mobile apps, technology, dot.com bubbles, hi-tech startups, they’re everywhere and they’re fast. But let’s slow down a bit. For centuries, people have drunk beer for taste, fun (alcohol), and nutritional value. Correct, this is where a lot of those big bellies around come from. A great tradition, huh? But who says you can’t innovate a traditional product?

The Austrian beer startup NIXE has now set out to try and change the paradigm. The founders claim that NIXE Extra Dry is the first Austrian beer with full flavour and strength but low on carbohydrates. The figure is 75% less carbs and 30% less calories than a regular beer, withthe same alcohol volume. Since the beginning of May, the beer is out in the market, selling in stores and bars of Vienna, Salzburg, and elsewhere in Upper and Lower Austria.

The co-founder: from the catwalk to the brewery

Constantin Simon, one of the founders of NIXE, has done it before. Running an online shoe store, he learned that sometimes you don’t need to re-invent the wheel. In more traditional products, it’s often small adaptations and an innovative approach that sell. The 27-year-old model was walking the catwalks of Australia when the local fast growing production of low-carb beers inspired him. No matter how popular among the Aussie beach-goers, Simon felt that to sell such a product to high-quality beer-spoiled Austrians, the taste of it needed to improve.

Simon, his sister Claudia and their co-founder Alexander Lauber learned about the beer but the actual brewing requires expertise, experience and technology. They teamed up with established Schloss Eggenberg Brewery in Upper Austria and began experimenting. Most low-carb beers struggle with high calories – hidden in alcohol content. So the trick was to simultaneously keep the carbs down, and trim the calories without getting rid of alcohol. It took a year to develop the new recipe – what NIXE brewers call the “minimal calorie formula”. The fermentation and brewing takes one third longer than usual but at the end of it, the taste and alcohol levels remain, and the sugars and calories are low. According to the NIXE web, an independent analysis has confirmed the results. Without being a beer expert and seeing through the trade secrets, it is difficult to assess the actual degree of innovation. One thing, however, is for sure – the bottled NIXE Extra Dry has been cleared for the market.

“Nixe” stands for a water sprite in German (the second meaning highlights NOT having to worry about sugars or a beer-belly). So it came naturally for the NIXE team to pick the local legendary nymph “Blonderl” as a brand to help the marketing. Blonderl, just like the water used in the beer, comes from the Traunstein region and it goes without saying: she looks pretty fit!

Startup in the beer business?

Everybody wants a piece of the beer business. Microbreweries seem to be popping up all around, brewing hardware is modernising, and you can now even draft yourself a beer without getting off your favourite pub table! There are other low-carb beers available elsewhere in Europe, such as UK’s Greens Trailblazer or German DAB Low Carb. The holiness of brewing essentials, though, the method or the ingredients, have so far remained largely unchallenged in the beer sanctuary that is Austria. Until NIXE seems to have broken the taboo.

With that, the message for the startup community is clear: Adopting an idea can make the same difference as inventing it. “A solid business model reduces risk,” Simon commented on his entrepreneurial approach. Academia already appreciates his ways – he has been invited to lecture entrepreneurship at the FH Wien and at the University of Economics and Business (WU).