A Picture Worth a Thousand Numbers 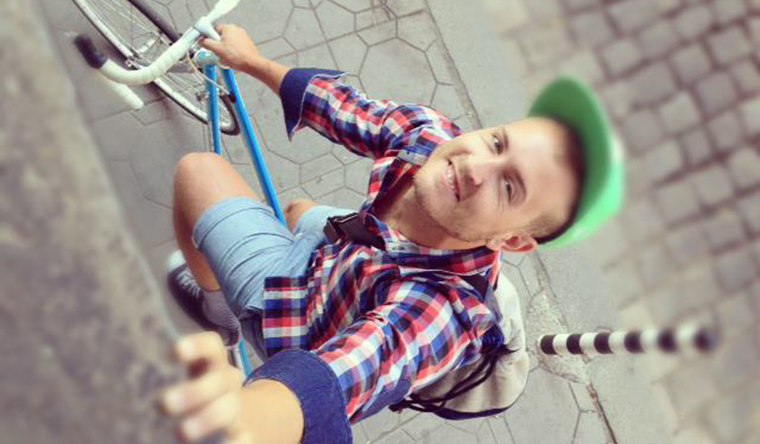 Starting a business can be daunting even without extra challenges, but when you try to do it in a completely new country, with no support system and close ones nearby, it can be downright scary. Now try adding a second move, to a place where you don’t even read the alphabet and you may be able to imagine what it would be like to walk in the shoes of Finn Fitzsimons, CEO and founder of NumberPicture.

When Finn left his home country of South Africa shortly after passing his skipper’s exam, he didn’t fully realise he would be sailing the little-charted waters of starting up a graphic business. Coming from a family of entrepreneurs, he had a good example in the face of his mother, who runs a company for productivity systems for farms, after having sold her previous payroll software business. Straight out of university and with the papers needed to be the captain of his own boat, Finn launched his own type of ship – NumberPicture – a data visualisation tool, which, as he would explain to a child “turns numbers into pictures”. In reality, it is a bit more complex, combining his natural aptitude for geometry with some newly acquired programming skills to make the creation of infographics easier for everyone.

Like many startups, NumberPicture was born out of necessity: “When I was doing a branding strategy degree in Capetown, I started finding these custom-made visualisations online and I was thinking they were pretty cool and wanted to start making them myself, for presentations at colleges,” Finn says. “I realised pretty quickly that there wasn’t any software available to do it, so I started asking around, to see if any developers would be interested.”

With his lack of experience and funding, and with developers struggling to imagine his product, Finn found it hard to get people on board, and after a year of asking around, he decided to teach himself how to code. Four months later, he had a working prototype with about 40 types of charts. And if that wasn’t enough of a challenge, he made it even harder on himself with a move to Vienna, where he had followed “a flame” to live the uncertain life of a freelancer. “I went on a few long-distance sailing races, I used to go hiking a lot, but probably the biggest adventure I had was going to Vienna. I just arrived in this foreign country and I didn’t know anybody.”

However, one area Finn wasn’t alone in was his need of a simple visualisation tool. His unusual charts attracted a lot of interest right from the start without much promotion. Several visualisation blogs wrote about the website and there was interest from IdN (International Designers Network), which featured some of his designs in a special edition book about infographics. By that time, Finn had realised that freelancing in Austria was much harder than he’dimagined so when a Bulgaria-based media analysis company noticed his website and made an offer to buy NumberPicture, he didn’t hesitate long and embarked on yet another adventure.

NumberPicture Story: the story of the company as Finn visualised it in a brochure Copyright: NumberPictureWhen Commetric purchased his company in exchange for equity in one of their sister companies, FidEq, they also offered Finn a permanent position in Sofia as Head of Data Design, which he accepted. Arriving in the country with just basic knowledge of the alphabet and no understanding of the local language must have been daunting. Finn remembers that it took him weeks to start reading the street signs, and even then he could not understand what they said. He spent two years working for the company before he realised that his NumberPicture project was not seeing the traction he had hoped for. Still believing in the need for his product, Finn bought back his company, leaving Commetric with a minority stake of 10%. The Austrian flame long extinguished, Finn relied on moral support from his entrepreneurial Bulgarian girlfriend, DJ and Art Gallery owner Desislava Pantcheva, as he pitched in front of Eleven and secured the standard first round of investment of 25.000 euros in exchange for 8% of the company.

“I was new to the lean approach to developing software,” Finn says of his three months in the Eleven accelerator programme, and adds that it was a time of learning from mistakes: “We were trying to build this really comprehensive application, which was quite unrealistic for the time frame and the money that we had. Eventually, we realised that we needed to strip it down.”

During that time, he faced one of the biggest challenges of starting a business in Bulgaria – finding the right team. Being new to the country and with a limited network of friends and acquaintances, his initial attempt fell short, and he had to fire one of his Bulgarian teammates, leaving his girlfriend, in charge of PR and art direction, as the only full-time employee. With Bulgarian programmers in high demand, he looked abroad and found an interesting match in the face of Jan Botha, another South African, who was at the time living in England. “It was actually very easy to convince someone else to come to Sofia, people don’t really mind relocating,” he says of his compatriot. He also partnered with Mauricio Saglietto, an Argentinean, working from his home country.

Luckily, the startup community in Bulgaria is very welcoming of foreigners and everything in Eleven is in English, with many international teams, Finn says. It is a bit tricky with documents always having to be translated, but it isn’t a problem if you hire legal and accounting companies. One major issue is the work permit, though: “Just to arrive in Bulgaria, my new team mate had to have 5.000 euros in a bank account, it was quite a big mission getting that.”

Three months down the line and with the new team in place, the company, which plans to rely on a freemium model, has a beta out, and is already starting to see interest from media analysis companies and news companies, with very little advertising. They are now working on a new seed round to grow the business and have big ideas in mind, with many new charts to add to their core pack. Finn’s personal team has also grown with the arrival of his daughter Vivian in the midst of all the rush. Juggling fatherhood with trying to launch a beta has been yet another challenge: “It’s doable, it’s definitely doable,” Finn says, laughing. “You don’t get too much sleep the first few months.” But there is a bright side, being an entrepreneur, he can afford the long hours and he feels it may have been harder with a nine-to-five job.

A pirate at heart

While listening to his story, it is hard to reconcile Finn’s ever-present smile and breezy demeanor with his accomplishments. In fact, he often gives the impression of someone who doesn’t take himself, or others, for that matter, too seriously. Living up to it, during the StartUP Conference NEXT, for example, he tried to make an inconspicuous entrance on stage minutes before his presentation, as he was late for the panel.

Finn’s life is full of anecdotes like that. Some of his former colleagues still remember his first birthday party in Bulgaria, when he introduced an interesting dress code: Everyone had to come with eye-catching headgear and he provided ridiculous hats and wigs for those who didn’t. His eccentric taste in fashion and lateral approach to life has been the topic of many a water-cooler conversations and it initially saw a reflection in his charts – with bars flipped upside down and unusual colour combinations.

Nowadays, business sense dictates that someone else do the design while he polishes the backend, because the first version of the site earned mixed reviews. Rather than being offended at the fact that his style isn’t coming through as much, Finn is happy with the work of Four Plus design studio and is the first to admit his quirkiness. “At school, people considered me the weirdest person in the room most of the time. I would laugh at stuff that other people wouldn’t laugh at, always think about things in a different way to the consensus.”

Island in the Sun

After several moves, Finn feels like he has found his place “I’ve got a family now here, a long-term girlfriend and a daughter, so there is no reason for me to go somewhere else. Every place is the same, it’s just got different buildings.” Having cast anchor, Finn shares his biggest regret to date. “I wish I had not waited two years to buy back my company and had started up earlier.” But, for a person who hasn’t even reached the watershed age of 30, he has already achieved quite a bit. “I am successful in the regard that I am doing what I want to be doing.