Gamifying Loyalty – and the Team 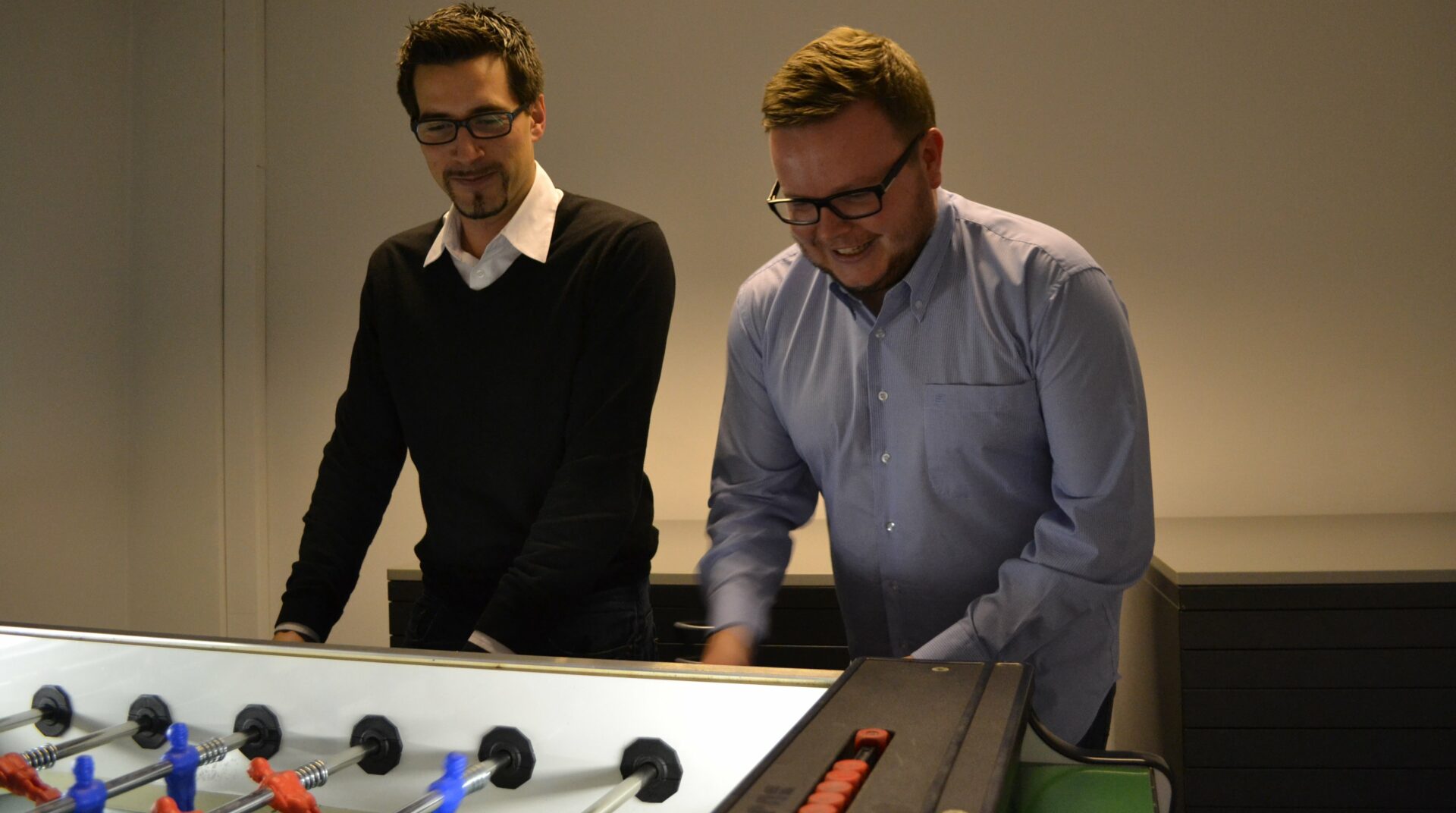 Besides Macbooks and a coffee machine, the football table aka “Wuzzeltisch” can be considered basic equipment of the Viennese startup habitat. Sektor5 has one, Hub has one, the guys and girls at STARTeurope have one. Not surprisingly, when the Gaminside founders welcome me at their office in Spaces03 in Vienna’s 7th district, we sit down next to a rather neat looking Wuzzeltisch with lights and all. I have not met up with Thomas “Tom” Aigner and Leonhard “Leo” Brunnhofer for a match, however (they would pwn me mercilessly, anyway). I have come to find out about how they work together as a team. 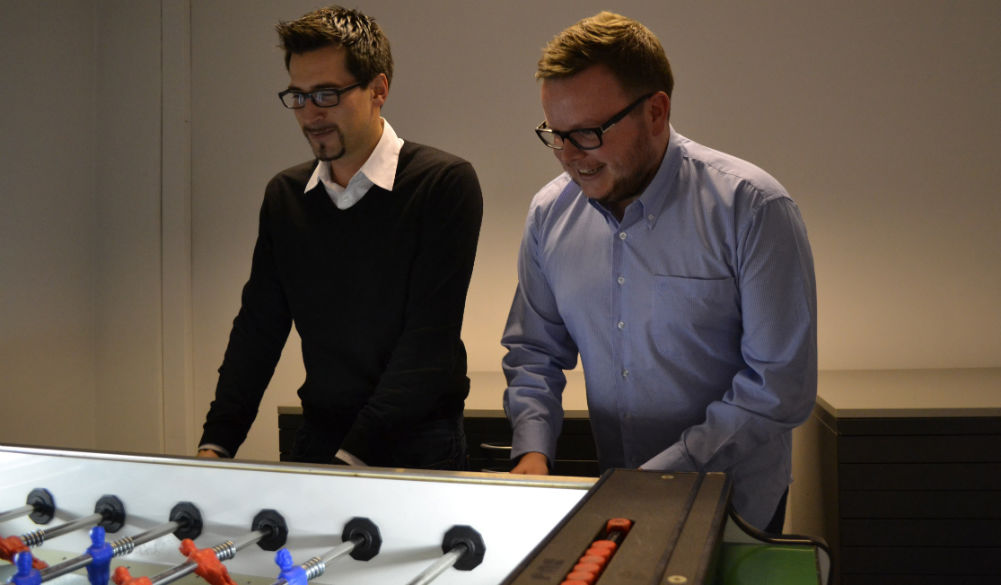 Slightly suspicious of my agenda, the two founders of Gaminside are happy to fill me in about their business. No doubt, there are many things that can be said about the startup and its core product – a white labelled gamified customer loyalty engine – the Loyalty Heart. Now in its third year, Gaminside won its first major contract with game publisher Gameforge (then Frogster) in 2011 (for developing a loyalty program for World of Warcraft clone Runes of Magic). Following an angel round led by SpeedInvest last year, they have been growing their customer base and were awarded with the third prize for their project ‘Gamification for Energy Providers’ at the 2012 futurezone innovation award. This year, they want to further scale their business model beyond the entertainment sector and hope to reach breakeven by the end of 2013.

In an attempt to find out about the origins of Gaminside, I want to know: Were its founders, by any chance, gamers themselves? “Well, I did game a little – racing, ego-shooters [German for FPS] and the like but it wasn’t hardcore,” Tom reluctantly admits. Likewise, Leo confesses to having spent some of his pastime with gaming in younger days. But labelling Tom and Leo as gamers gone entrepreneurs would not do them justice, as I find out. 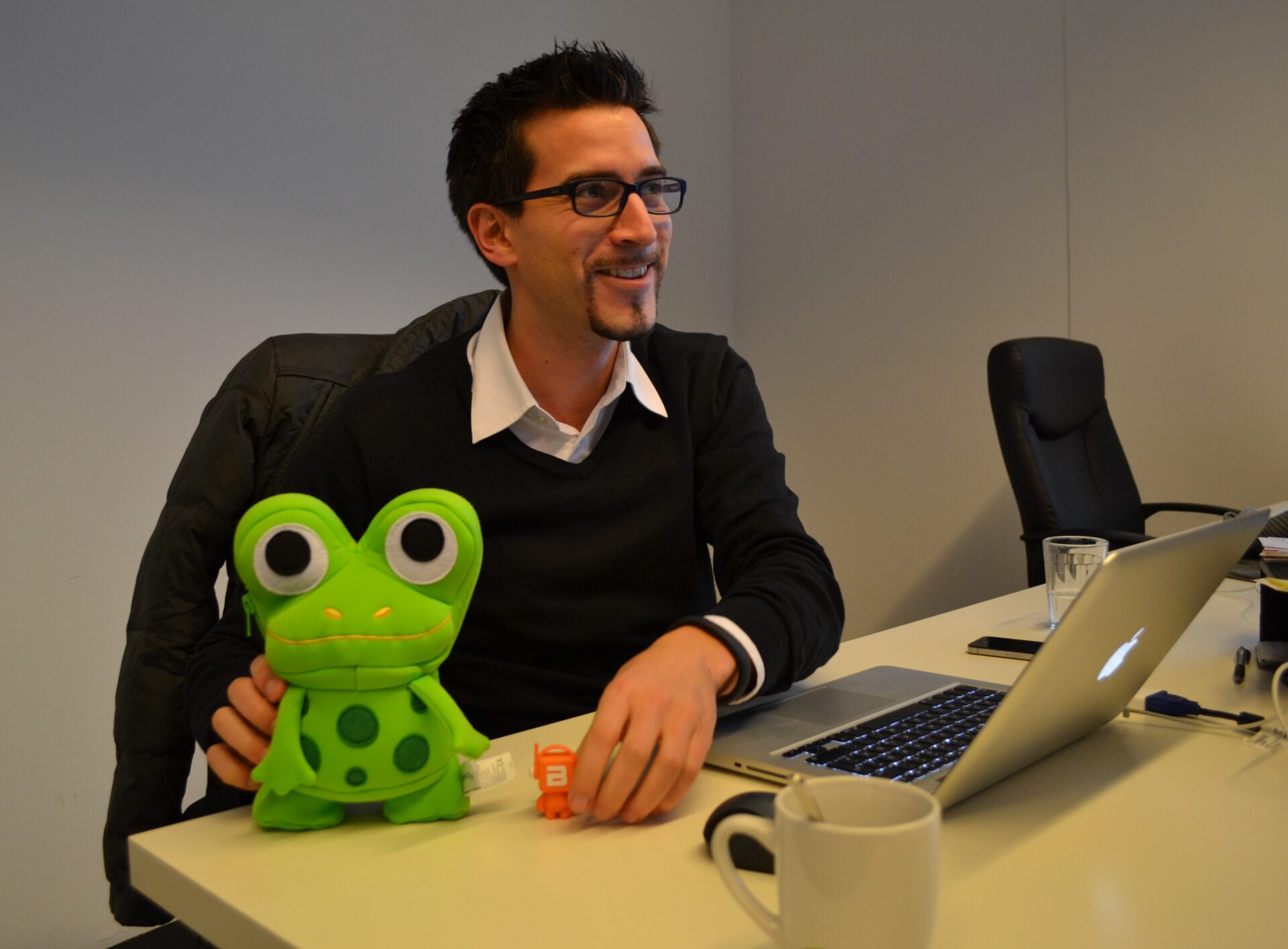 A gift from their first major partner Frogster (now part of Gameforge)Tom (31), had founded his first company – an online network for extreme sports called xjunkie.com – with a friend while still a student of telecom and media engineering. “I always wanted to do my own thing,” he explains his drive to do business. “Looking back, I have actually been engaged in entrepreneurial activities for quite a while now,” 33-year old Leo says. “At school, I was running all sorts of projects to increase my pocket money.” As Leo reminisces about his informal bookie career at school – he refers to it as “micro sports bets” – his eyes light up with entrepreneurial glee.

Entering Vienna-based startup paysafecard as its 7th employee in 2005 (the company now has more than 100 team members and was acquired for a whopping 140 million euros by British Skrill last year), Tom collected plenty of startup experience before founding Gaminside. It was during his four years at paysafecard that Tom specialised on CRM. His then boss, Michael Altrichter, encouraged Tom’s proactive efforts to gamify customer loyalty by developing online browser games. “It was like a startup within a startup,” Tom recalls. He continued this direction at fatfoogoo, a Vienna-based startup focusing on online game monetisation. 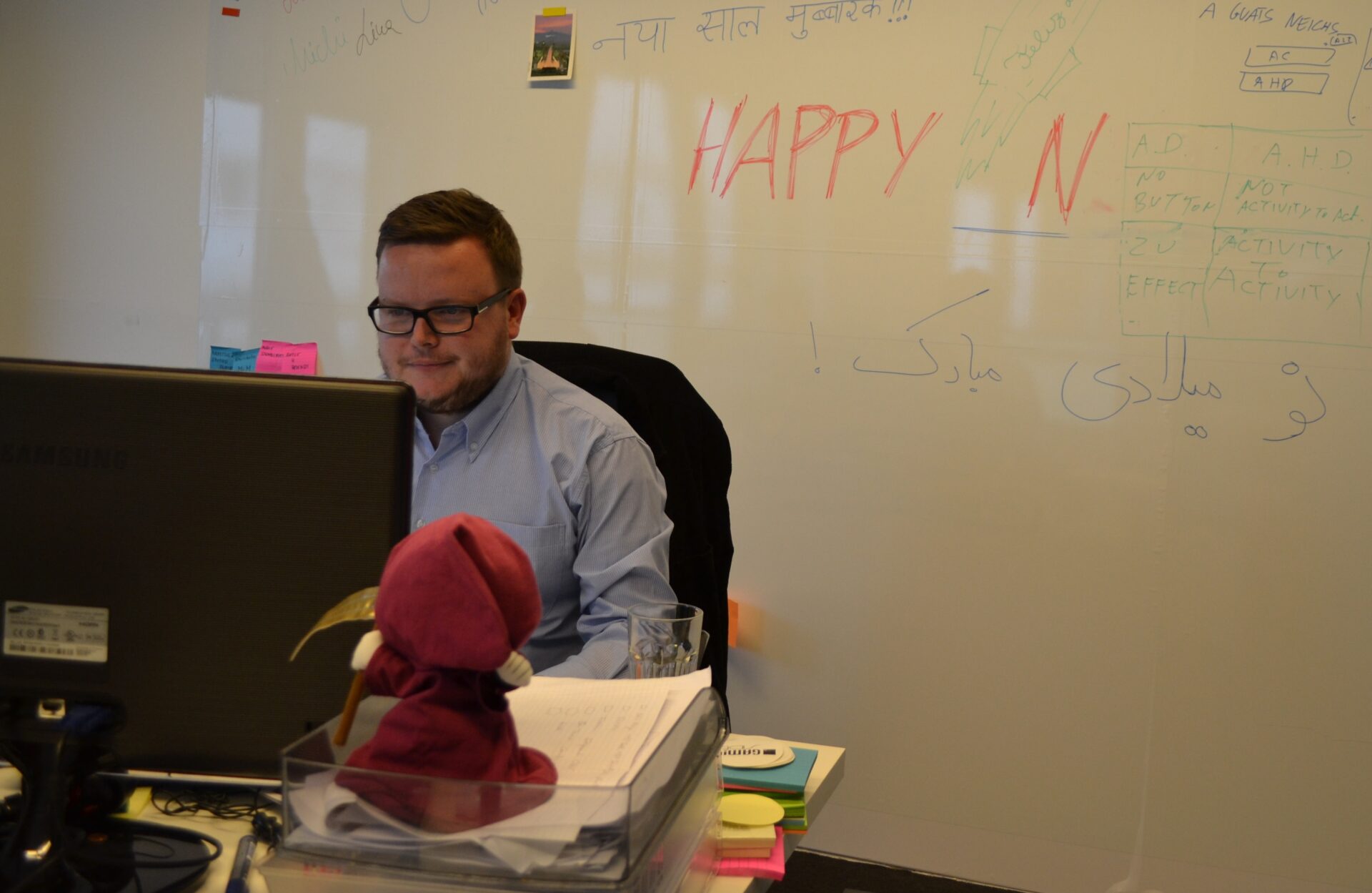 Happy times at the Gaminside office – but what’s with the Grim Reaper?“We’ve always been startup people”

Later that year, Tom and Leo, who had met through a mutual friend a few years back caught up to discover that both of them had just quit their jobs. Leo, who has a Master’s degree in computing and collected startup experience at now defunct Peoplet and had been working as lead software engineer for Austrian telecom company Frequentis at the time. The two young men had been exchanging business ideas before.

As both were free from steady employment, the time seemed right to start materialising these ideas. One stuck out: “After attending E3 expo in LA in June 2010, I realised the potential for gamification in the customer loyalty field,” Tom explains the background to Gaminside. With support from the famous 3 Fs (including Tom’s former boss Michael Altrichter) as well as Double Equity from AWS, Tom and Leo started their business from their home offices and coffeeshops in 2010, to found a limited company (GmbH) in April 2011.

With their complementary backgrounds – Tom as CEO (holding 59 percent of company shares) and Leo as CTO (with about 10 percent of shares) – they come across as a well attuned team. “We’ve always been startup people, it’s a way of life,” Tom smiles and gets Leo’s approval. This seems to also hold true for the rest of the Gaminside crew, altogether “8,2 employees,” as Tom and Leo inform me. 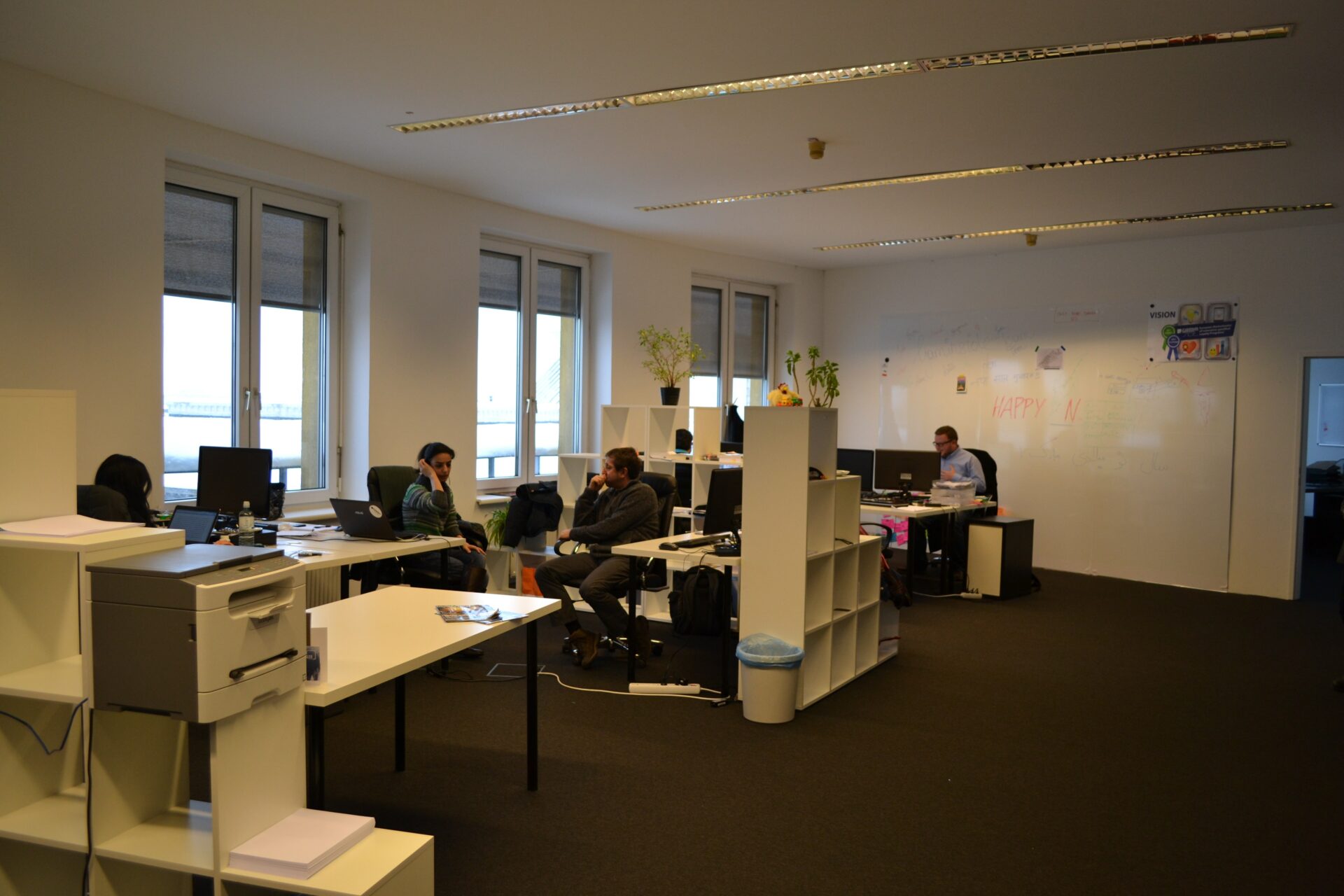 The Gaminside office at Spaces03

“You have to be able to have coffee together, it’s like joining a family,” Tom says about their recruiting strategy. “It’s not just about hard skills and experience. Besides, not everyone is made for working at a startup.” They recall hiring one of their current team members, “There was really just his name on the CV. He was a bit of a hobby hacker, but he really wanted to work for us and we had the feeling he could do it.”

“Beat us at table football and earn home office time”

Of course, working together is not all roses and rainbows. “When you spend a lot of time together, like we do, conflicts arise but you just have to continue your common path,” Leo says. Although the two seem very much in sync, Tom emphasises that they are in fact very different. “Leo has an analytical mind, while my approach is more intuitive and hands-on,” he explains. Moreover, as my inquiry shows, Leo is more of a dog person and likes to spend his free time with his daughter, while Tom prefers cats and enjoys skydiving. Yet, they’re “not the types to carry out big verbal debates,” Leo confirms my initial impression. “We have found a good way of dealing with conflict, of leading constructive debates,” Tom completes this rather harmonic picture. 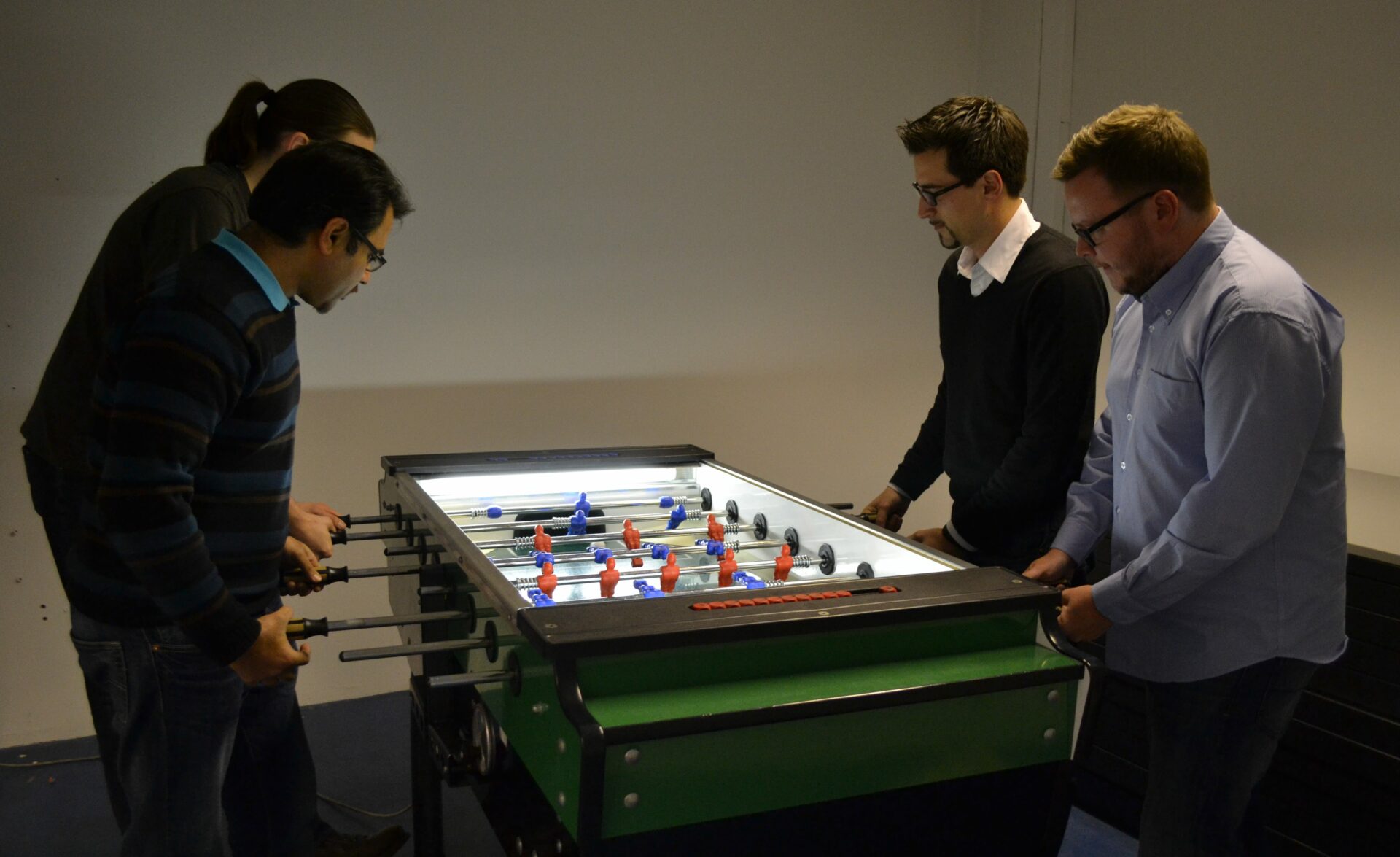 Fighting for home office time at the WuzzeltischTalking about the “goldrush mood” the online game sector has experienced in recent years, both founders are aware that there is increasing competition. In addition, “Gaming is not for everyone,” as Leo knows. “But through projects like our platform for energy providers, which playfully encourages customers to control their energy consumption, the real value of gamification for the general public becomes apparent.” Leo is confident about their future.

“Gamification has become a buzzword. Everybody wants to do it. But there still is a lot of educational work to be done. Starting with our own company.” Suddenly his glance drifts to the Wuzzeltisch. “We want to live gamification ourselves more,” Leo smiles – there is that sparkle again. “We’re thinking of a gamified reward system for our team members – you beat us at table football and earn home office time.” “Although, that would actually more of a punishment than a reward,” Tom jokes. As they give me a live demonstration of the concept with two team members, I’m almost convinced of that. After all, who has got a Wuzzeltisch as nice as that at home?