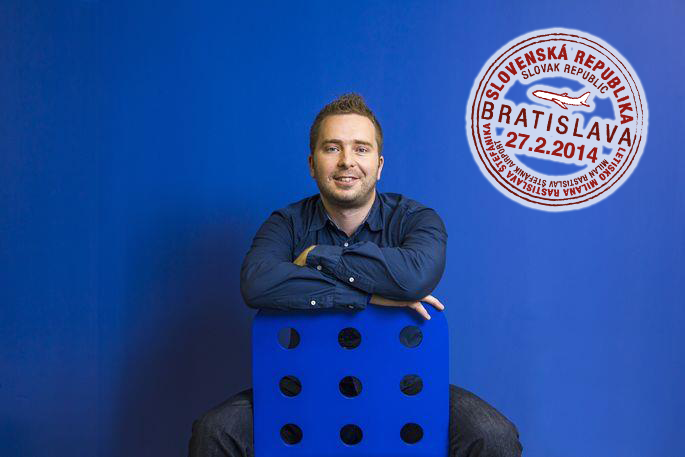 Peter Dendis wants to make it clear from the beginning that he chose to be an entrepreneur for all the right reasons: growing individually as well as helping others grow, and serving the community. But when he set out to start his own company, he knew it would take more than a vision and the will to do it well.

Gathering a good team was at the top of his list.

He started Blue Winston with a small team that already had several years of combined experience with AdWords. It was a strong kick-off to a business centred on a product which Peter deems as “a global innovation”. In just a few short years, the company managed to leverage artificial intelligence, automate it and put it in the service of clients who are advertising on Google. One of the driving forces behind the venture has been Peter’s brother-in-law, Marian Mikula, who is currently their main developer. “A large part of our success is mainly due to his deeper understanding of the logic behind AdWords,” says Peter.

And yet, along the path of building up the business, Peter says there is more to making it than having a good team, namely “a lot of work, a lot of luck, and experience”.

The luck part came in early when the team were given the chance to create a campaign for the online bookstore martinus.sk, their first client. Already then, “we realised that our system was built very differently from that of our competitors.”

As a company that was created on the premise of maximising the return of AdWords for its clients, Blue Winston had set its sights on making the process as easy as it was efficient. Therefore, the thinking behind the company’s main product was that a certain level of market insight is required. For end-clients, that translates into ads with thousands of market-adjusted versions, depending on a set of clear criteria that can present the most relevant content to the right audience. Doing this manually would be almost impossible, not to mention a lot of work hours, advanced technical skills and a large budget.

At this moment, Blue Winston targets e-shops because, having a varied product portfolio as they do, they understand the need for pinhole targeting. And the company seems to have the technology that can make this as effortless as possible for its clients. “They don’t need to have advanced tech knowledge or a full-time in-house web team,” says Peter. “They just have to go through an initial easy set-up process and then everything happens automatically.”

From the starting phase, Peter and his small team of three full-time and several part-time coworkers built an open Google API (available at Tarantula.sk) that allowed for the management of AdWords campaigns with a high number of keywords. The team kept improving upon it until they decided that it was time to create a web service to accommodate the growing marketing needs of their clients.

So, with the help of their AdWords-experienced team as well as the services of Black Swan Rational, a big data Slovak company with extensive experience in conversion generating solutions, Blue Winston was created as a stand-alone web service for campaign creation.

The technology behind Blue Winston is what makes the product a global innovation, Peter believes.

„Blue Winston is focused entirely on long-tail AdWords (with specific focus on multiple individual products). Each product has its own ad, its own keywords and its own landing page. The information is constantly updated to match current stock availability,” he says.

The first version of their tool has been launched in private beta with a client, who has been using the old version for over a year, and it has been able to reduce the cost of conversion three-fold already.

Blue Winston was initially financed through funds from Peter’s earlier ventures – Tarantula and 3F – which amounted to approximately 100.000 euros, but the need for an investor became obvious very early on. Peter admits that he somewhat naively believed that Blue Winston would be profitable from day one, which was not the case, and so he was forced to look into attracting an investor. Since he needed someone who believed in the business, what better place to look that the company’s own client portfolio? He found what he was looking for, but things did not go well at all.

“Because I was under a lot of pressure and our investor seemed to be in a hurry, I made a mistake” Peter remembers. The mistake was that the investor was given shares in the company sooner than was advisable. “The worst thing was that I knew I was making a mistake and still did it. To make matters worse, we only received less than 10% of the money we should have received, which didn’t cover even a third of the costs we had at that time.”

In January 2013, the offer expired and Peter wanted to end this collaboration. “We were lucky enough to find a new investor very quickly and get him on board. When I look at it after one year, it seems almost unbelievable. There are many things I would have done differently, but I learned a lot. It was a very painful but valuable experience.” Blue Winston currently has a team of 12, with four of them being full-timers.

With ad management, especially in the world of Pay Per Click where every cent needs to be correctly quantified and leveraged for maximum results, Peter understands that you can’t pitch your product to a client if you don’t talk actual numbers. “For a campaign with a conversion price of three euros per conversion prior to using the engine, the price per conversion had dropped to 0.9 Euros in just 10 days. Today, every e-shop owner is able to start and manage such a campaign. Obviously every sector is different and the numbers vary, as do marketing strategies. But when you show what our engine does in terms of actual cost effectiveness, it all gets a lot clearer for clients.”

The service operates on a flat fee basis, currently set at 99 dollars, with an optional 30-day free trial, and the company is currently looking at integrating other tools in their system, like remarketing or commission-earned credit.

A piece of the global pie

If Blue Winston now has a place on the global market, it is mainly because the company made it a point from the very beginning to go international. “Slovakia is a small market,” says Peter. That’s why the company now targets e-shop owners worldwide that have a large product portfolio, with a realistic estimate of reaching 10% of the global CMS users (currently estimated, according to company data, at 2 million).

“At the moment we are trying to sell in two major areas: Europe and North America. In Europe the biggest potential we see is in Scandinavia, Benelux and Germany.” This may seem like a stretch for the team of 12 but given how rapidly they’ve managed to almost redefine how we use web tools for maximum conversion and reach, no one would be surprised if they pull it off.