A business made of cardboard 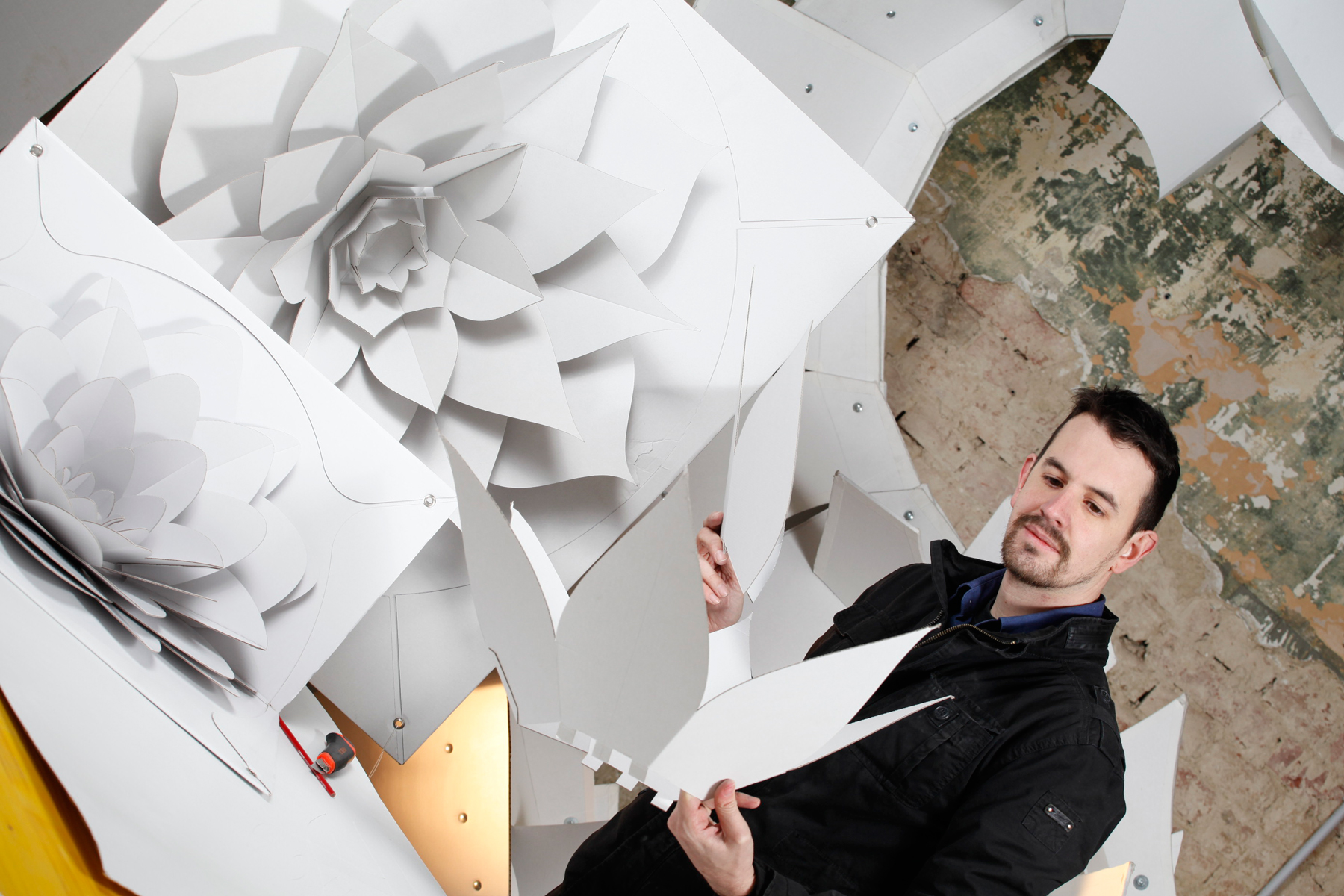 “Why would anyone invest much money in an event, when all that matters is the follow-up picture of it?” Viennese entrepreneur Philipp Blume (33) asked himself this question and realised an opportunity to go into business – by making photogenic, cheap and recyclable cardboard décor with Papertown

Philipp Blume and his cardboard 3D pop-up flowers. Credits: Severin DostalPhilipp Blume actually wanted to be an inventor when he grew up. Judging by his attitude towards work, the Viennese entrepreneur might have been a good one. ”This is what gets me going, trying to find practical solutions to real problems”, says Blume, who founded Papertown as a sole proprietor last year – a business specialised in selling cardboard products for stage design. One can see in his sparkling brown eyes that he could talk forever about his corrugated paper, about it being folded in Origami style and assembled with a special screwdriving technology and so on. But he doesn’t. 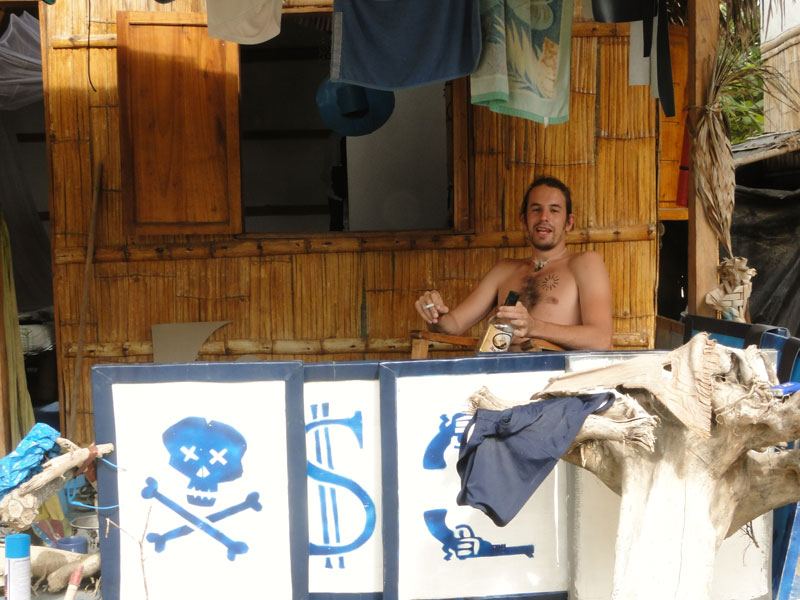 Philipp Blume and his multi-use playing cards in Canoa, Ecuador. Credit: tollplatz“In business, it’s important to be a good story teller”, Blume says. And his practical solutions to real problems suddenly take the shape of oversizedplaying cards, with hearts, skulls, bottles and guns painted on them.  One is instantly transported to South America of the year 2009, where the young student of architecture is trying to develop a portable stage set for a street theatre called “tollplatz”, all the while being the laughing stock of the ensemble for having such a nutty idea. Variants of The Little Red Riding Hood are staged in different locations and the possibly endless combinations of his custom designed playing cards make sure that there is never a dull moment on stage. Heart associated with bottle for instance spells alcoholism and putting these two cards together is a great recipe for laughter. Some cards can turn into tables and chairs; others have handles and can be slammed in rage attacks like one would slam the door. 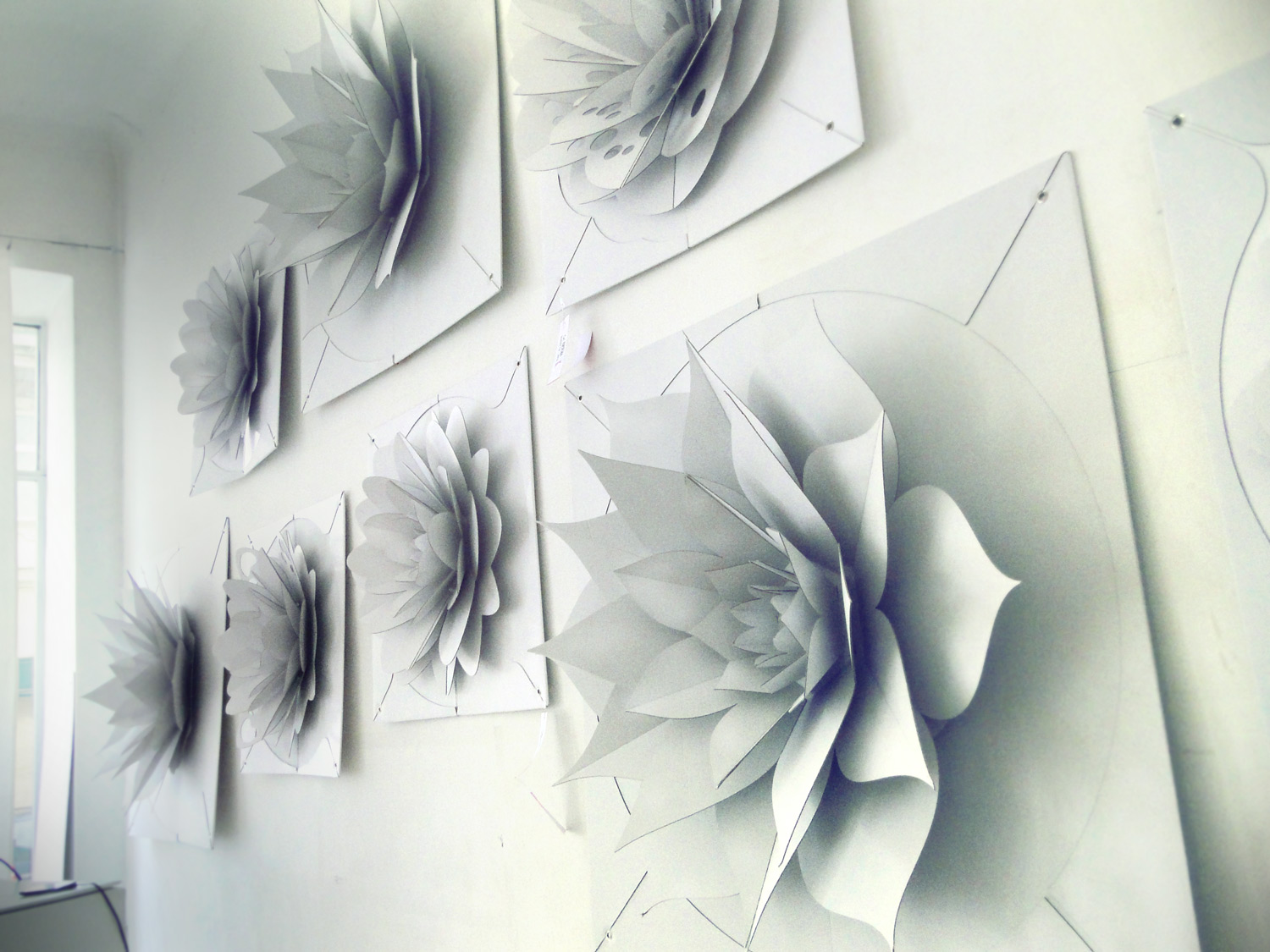 3D pop-up flowers made by Papertown. Credits: Papertown Back to present, we pass by decorative 3D pop-up flowers, dragons, bees and various pieces of furniture, which have at least one quality in common, apart from being made of cardboard: they are all oversized. “There is one thing you have to know about me. I am a megalomaniac”, Blume says looking very serious and suddenly turning philosophical. “Isn’t that what we all do in life? Building bridges over the gaps that come our way? Well, I want these bridges to be grand!” 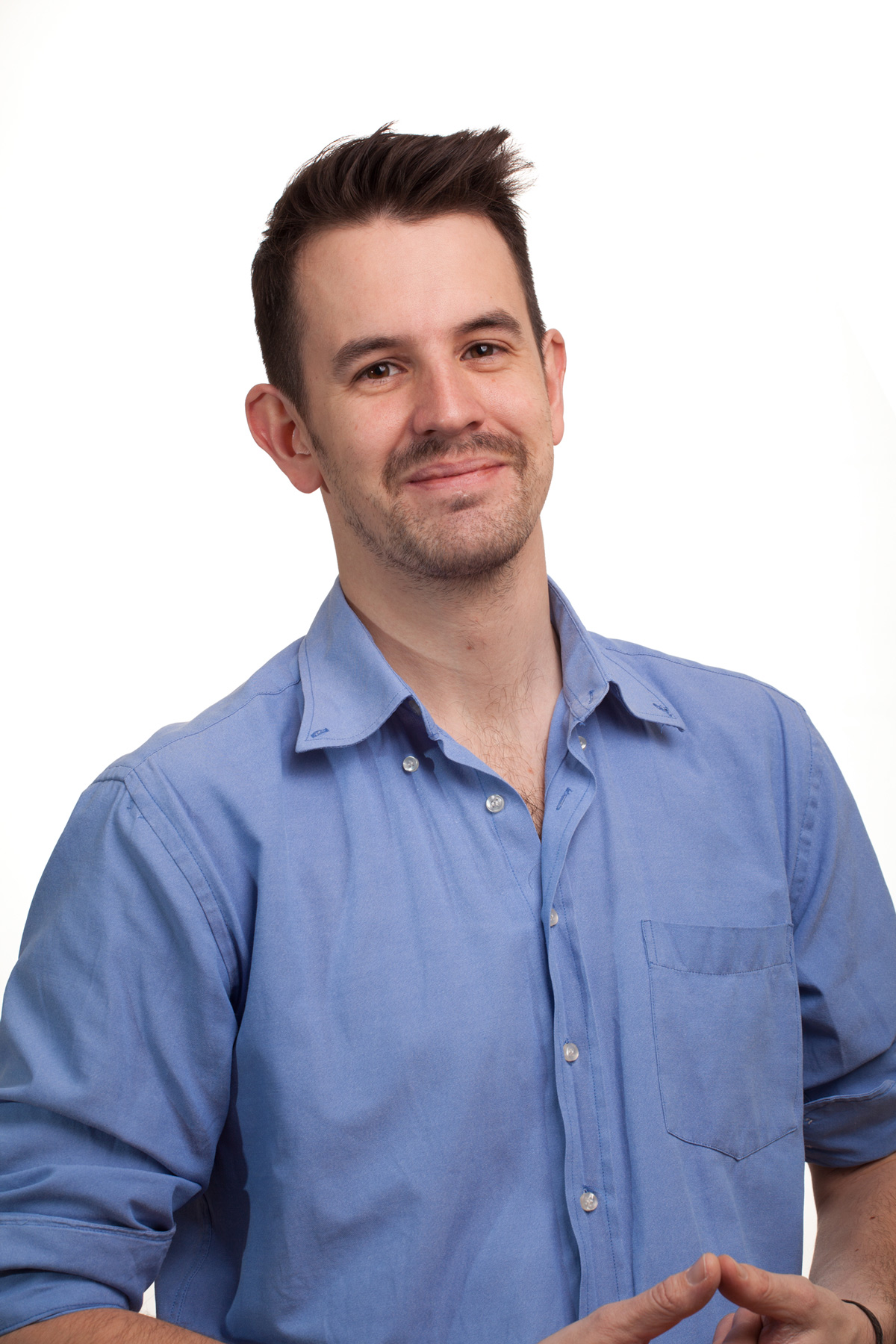 Philipp Blume, Papertown CEO and Chief of Design. Credit: Severin DostalOne might think that Philipp Blume is just the visionary artist within the team but as the CEO of Papertown, he works on average 10 hours a day and knows every little detail of his business. The cost of materials and their manufacturing for instance are key factors in negotiations with clients and Blume knows them at all times. In its first year of existence, Papertown reported annual sales of 80.000 euros.  “But I would have never made it this far without my team”, he says looking around in his office and complimenting Erika Büttner with a smile. She’s responsible for marketing and communication and is one of the four coworkers of Papertown. 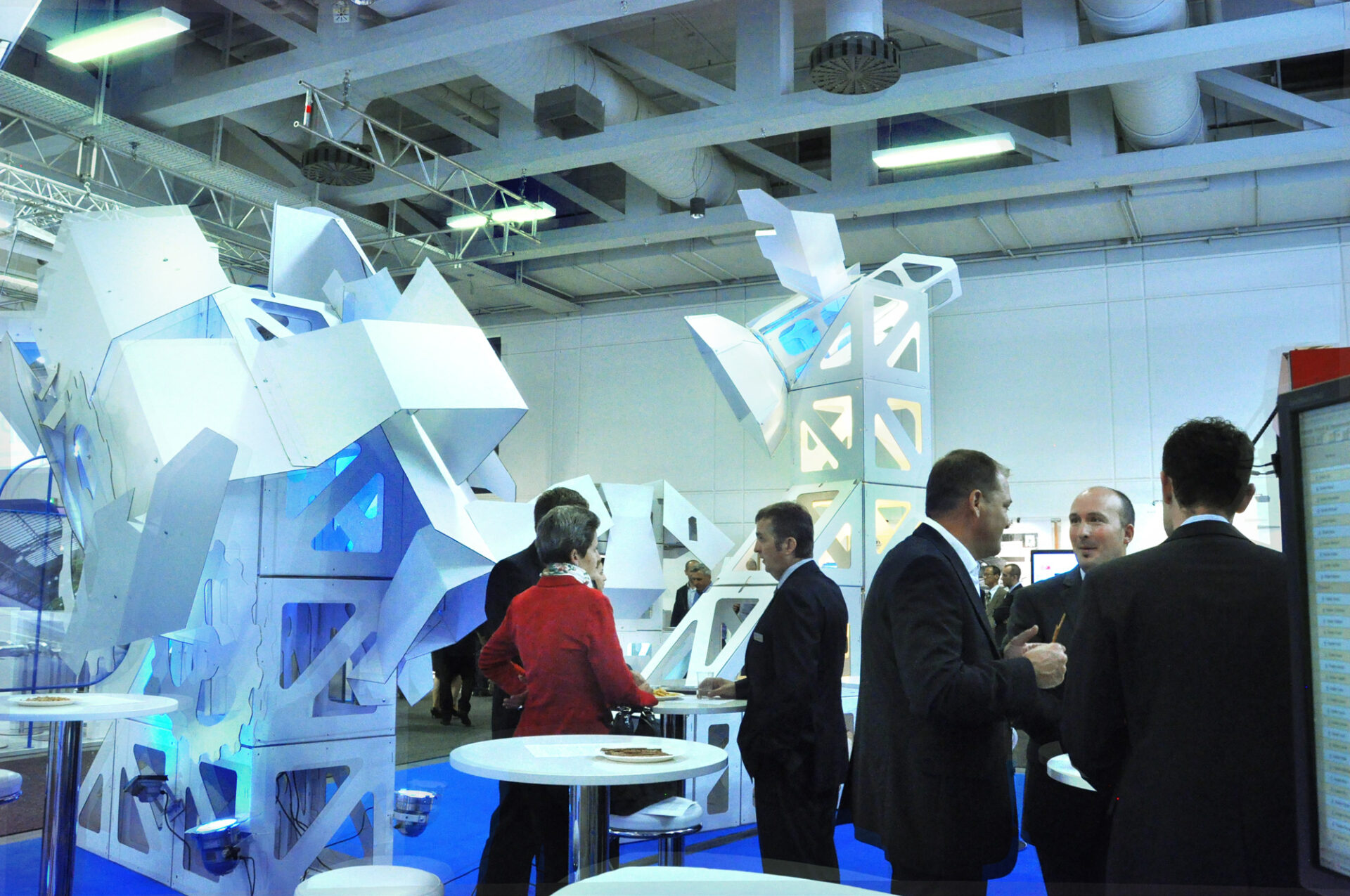 Trade fair stand of Innotrans made by Papertown. Credit: PapertownBut merely doing his homework is neither enough nor Philipp Blume’s style. His foresight brought him into the cardboard business and is constantly showing him future possibilities.  “Why would anyone invest much money in an event, when all that matters is the follow-up picture of it?”, Blumeasked and saw in the current post-reporting frenzy around events the perfect opportunity to sell his cardboard décor, ”because it is cheap, photogenic and recyclable”. Meanwhile, he is thinking about writing his diploma thesis in order to finally graduate from university. “I started to write on a few different topics but I abandoned them after a few months. There was always something more interesting to do”, says the young entrepreneur.  Like playing clarinet in an orchestra or taking part in film projects about chicken people.  But that’s another story. 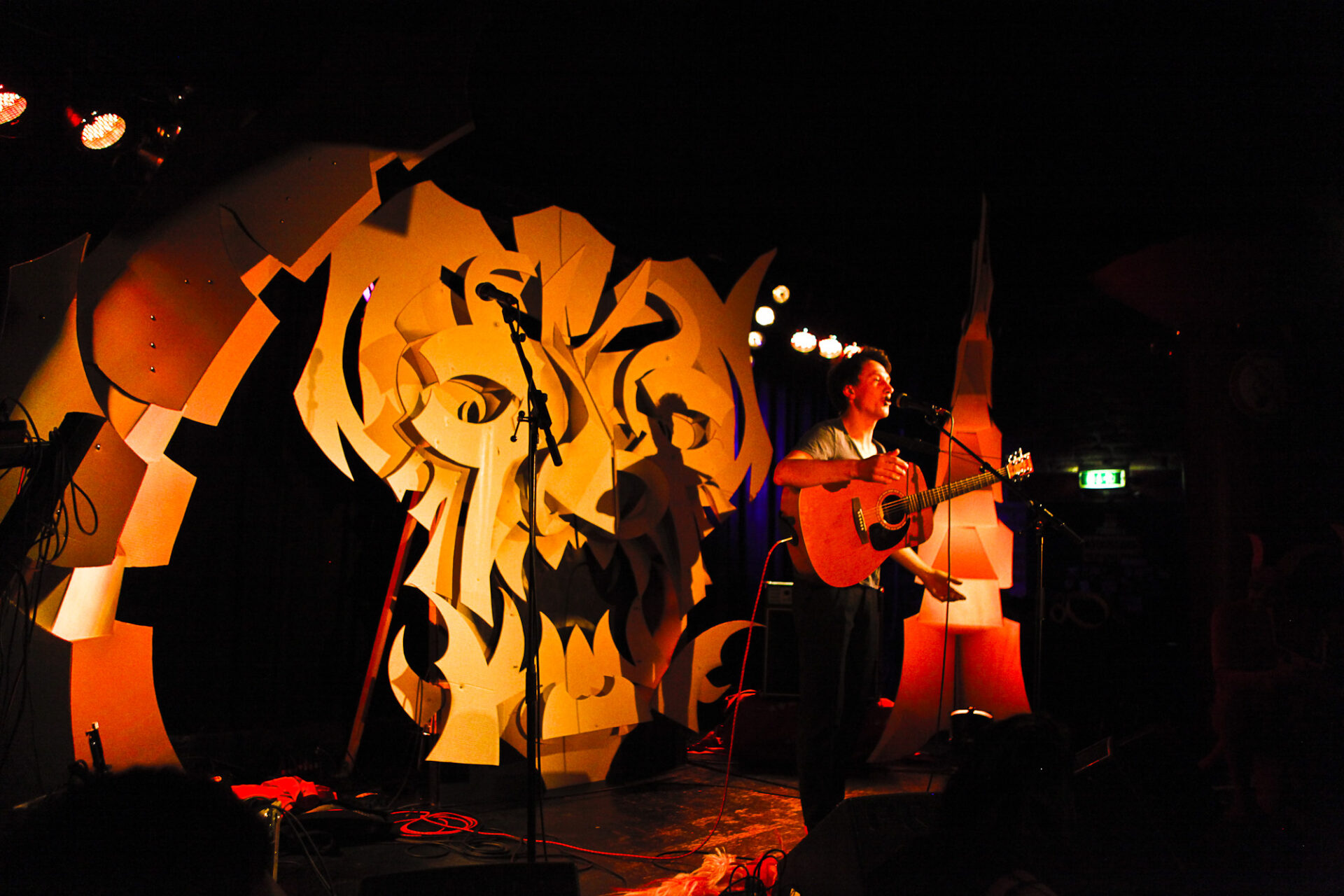 Dante’s Inferno made of Papertown cardboard. Credit: Severin Dostal“That’s how it should work”

While he was working as an illustrator and graphic designer, Philipp Blume kept taking small orders for cardboard products until the end of 2011. That’s when he was offered to provide the scenery for a concert at the Vienna RadioKulturhaus.  For what it’s worth, the performing artist was his sister, the renowned singer and songwriter Clara Blume. “For the first time in my life, I had to hire people to help me pull that off because it was a huge production“, Blume recalls. But he also realised that “that’s how it should work” and the idea of launching his own business arose. Philipp Blume was not afraid of going freelance. Generally speaking, his only fear in business is that of losing the zest for what he is doing. “I’m afraid of one day reaching a goal and noticing that this doesn’t make me happy because I will have lost the desire to reach it along the way”, Blume says. And he sees in habitual actions his greatest enemy. Unless, of course, it is the habit of designing. Bridges. Cardboard bridges most probably. 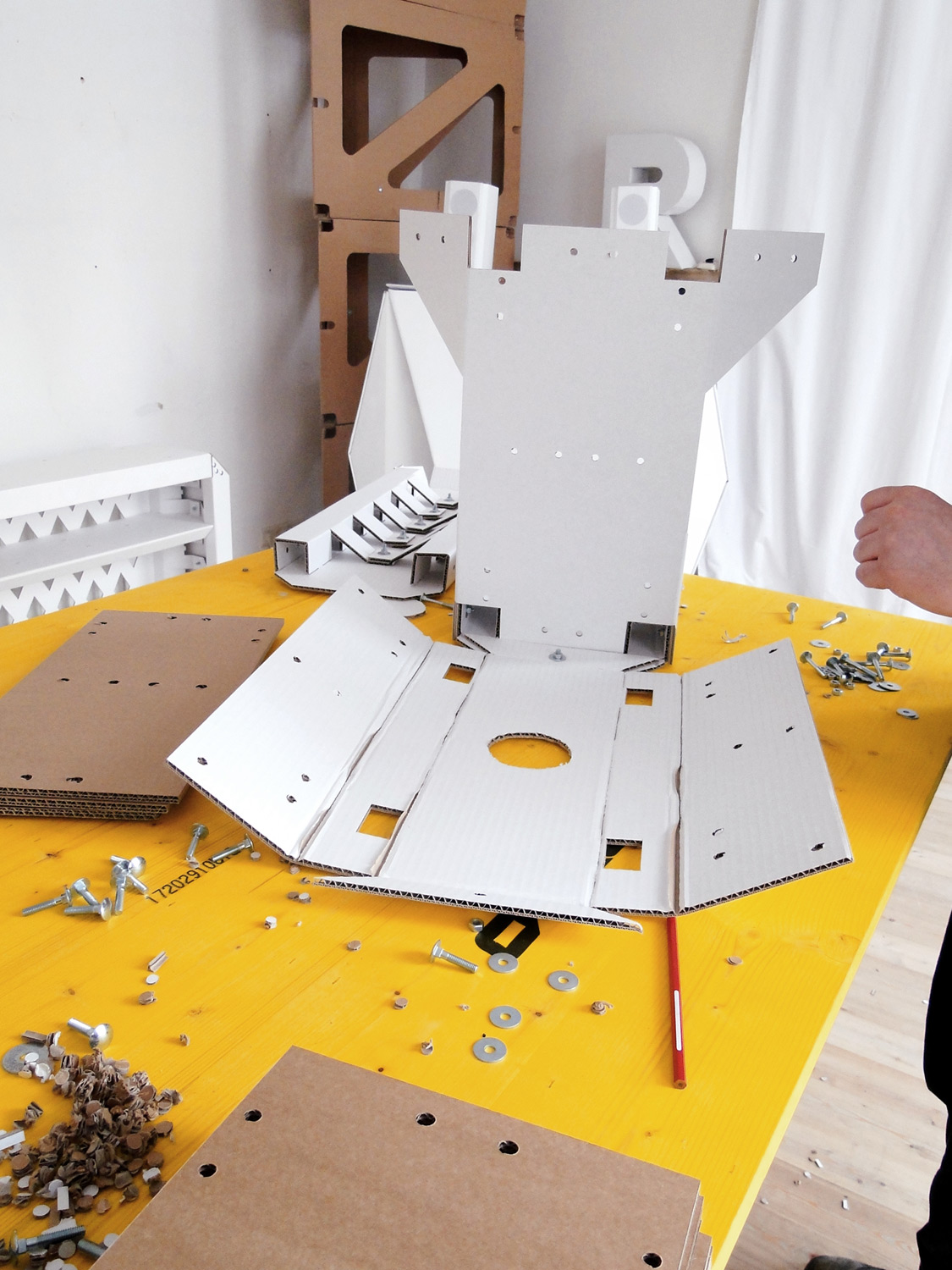