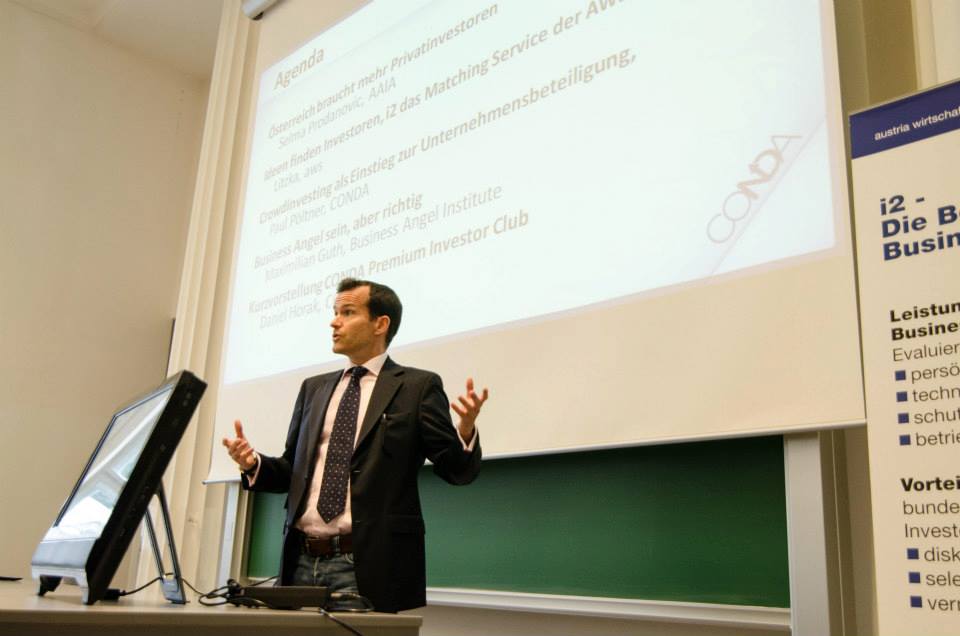 The stock market bores you and standard investment funds are too anonymous for your liking? Looking for a long-term stake in a young local company? Then this informational event on crowdinvesting in Austria may have been just for you!

Organised by the Vienna-based crowdinvesting platform Conda in cooperation with the Business Angels Institute, Austria Wirtschaftsservice (AWS), and the Austrian Angel Investors Association (aaia), the Thursday night reception featured talks by some staple names of the Viennese startup ecosystem and a round of pitches from new companies looking for funding. “The idea with this event was to show more people that there is a startup community in Austria. There will be more to follow, on a regular basis,” said Daniel Horak of Conda.

Selma Prodanovic of aaia (see our coverage of this year’s EBAN Business Angel Congress hosted by aaia) talked about the importance of raising public awareness of alternative financing models within Austria, asking the audience to stretch their imagination and think of some yet unlikely what-if scenarios (what if crowdfunding or crowdinvesting had been a possibility for saving Schwedenbomben and Alpine Bau?). Despite Austria’s traditionally conservative stance to financing innovations, Prodanovic believes serious headway is being made and that events like this are part of the cause. Bernd Litzka of i2 echoed the positive future outlook, noting that only three years ago the idea of business angels was unheard of in Austria.

As for the first two contenders on the platform, startups Wohnwagon and Evntogram are both about to reach their respective expiry dates for raising the first round of financing; Wohnwagon is at 50% of its target with just over 35.000 euros raised and 13 more days to go – the deadline was already extended once in mid-June, whereas Evntogram is at 22% with 23 days left.

Do the people at Conda think they will make it? “Yes. For sure. We are currently looking at new opportunities for working with a number of investors who want to invest more [than the current maximum sum of] 3.000 euros,” said Horak.

At the moment, the average investment on Conda is 850 euros, and mainly coming from male investors, he added. “We are trying to change that. One idea is to work on more female-focused advertising. Another is to build up a pipeline of companies focused on products for women.”

In addition to Wohnwagon and Evntogram, another 4 startups seeking financing got to pitch to the audience.

Use Twice is a new collaborative consumption service allowing users to find private lenders online for anything ranging from camcorders to mountain bikes.

Senior Pad offers tablet-based homecare solutions for seniors, and is also the winner of the netStart Award 2012.

Pixxers  offers a new solution to the needle-in-the-haystack problem of the global 17-billion-dollar photo market: “Stop searching, start wishing”, they say.  You don’t need to look through thousands of photos anymore to find the one you need, instead you can ask the community to take it for you. A win-win for both photographer and client.

Conda’s next crowdinvesting round is announced for July.