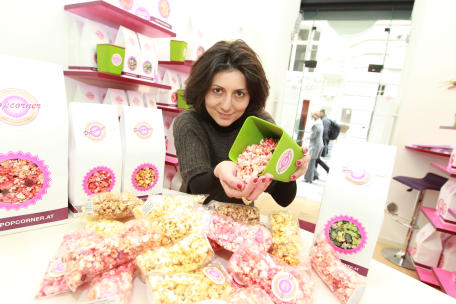 What began as a quirky pregnancy craving turned into a viable business idea: Popcorner. Celebrating its first anniversary this month, the family startup specialising in the sale of mostly organic, sweetened popcorn in a bold variety of flavours caused quite a stir on the Vienna foodie scene since its founding in March 2012. Overwhelmed by unexpectedly fast success of its flagship store and about to open a second in Kuwait, the founders of Popcorner – sisters Emina and Sanela Mandzuka – are now at a pivotal growth juncture. To grow fast or slow? That is the question CEO Emina is currently battling with. inventures.eu met up with Emina the elder to discuss future prospects and a bit of history.

When Emina (36) would fly into Vienna on her weekly commutes from Frankfurt, where she worked as upper-level management at P&G, her younger sister, mother-to-be Sanela (25), would often ask her to bring back a packet or two of sweetened popcorn. Sanela justified her claim to a sizable portion of Emina’s luggage space with the excuse that the low-calorie, tasteful snack simply could not be found in her hometown of Vienna. After a few cave-ins, Emina challenged her sister to find another solution to the problem: start making it herself.

Numerous failed attempts to re-create the right texture and base flavour followed. Then Sanela discovered that the key to making the corn pop in the right way was proper temperature adjustment. With this lesson learned, Sanela embarked on an innovative corn-popping frenzy in her mother’s kitchen, experimenting with unconventional flavours and later adding toppings.

The two sisters of Bosnian origin slowly began toying with the idea of selling the stuff – going as far as getting a designer friend to create a logo (which they now use).  Sensing that theidea had potential, Emina began looking for investors. At this point in time, she had been promoted within P&G and was working at the company’s European headquarters in Geneva. Using her personal network, Emina quickly found partners for the venture: “My boyfriend at the time was working in banking, and he introduced me to some guys who were looking to invest in something different.” As soon as the contracts were signed, Emina quit her job at P&G, moved to Vienna, and founded Eminamore Popcorn Vertriebs GmbH.

“If I had listened to anyone about Popcorner, it never would have happened”, Emina admits. Although friends and family were supportive at the start, many only saw the obstacles and inherent risks of self-employment. “People thought I was crazy”, she admits. Reflecting on her decision to leave her high-profile corporate career, Emina has no regrets: “I always knew I had to do something of my own”. Emina has an evident entrepreneurial streak; as a student she ran a successful events management business and at 22 tried – and “totally failed” – to organise a large-scale network of organic food markets in the city.

Walking into the Popcorner store in Vienna’s Naglergasse, one immediately thinks of an old-style candy shop. Neatly arranged rows of pink-and-white packaged popcorn adorn the shelves on both sides. The bright pastels of the fruity range are on one side, and the chocolate-based flavours on the other. The clever layout of the small space is both inviting and serene, where customers can take their time to choose amongst the many flavours. Even when it comes to snacks, many of us seem to suffer from the paradox of choice: more than a few of the walk-ins spend a surprisingly long time pondering whether to go for Dark Berry or Apfelstrudel, the latter still holding bestseller status. Emina says she’s sure many of them walk out thinking, “I definitely should have gotten the other one”.

The Exigencies of Organic

Although a seasoned professional and an adamant proponent of healthy eating, Emina had no idea how difficult it would be to certify their product as organic. To qualify for the EU-wide label, every ingredient must be tested, and 95% must be of organic origin. The remaining 5% may only be inorganic where no organic substitute may be found, as is the case for certain types of food coloring. Nevertheless, despite the extra time and efforts required, Emina insists on maintaining the highest possible level of quality. Although Popcorner’s prices – ranging from 2 to 9 euros per package – are on the high end, the product continues to sell well. The sisters draw the majority of their sales from business customers, which make up 60% of turnover. Clients have included the Gartenbau Kino, the fine foods section of Billa Corso, and high-end hotel chains like the Hilton and Renaissance groups. At present, the Popcorner online shop only accounts for about 2% of sales, which does not worry Emina, who learned through a Nielsen study that only 1% of Austrians do their food shopping online.

Emina would love it if there were a collective re-thinking of approaches to food, where she believes there is a misguided tendency to go for cheap over nutritious, imported over local. The sister’s vision to provide a tasty snacking alternative seems to have resonated with a large public. Apart from a series of high-profile business clients (above), Popcorner has been approached to hold tastings at a variety of Viennese events, including the Amadeus Awards, the Life Ball, and the Redbull Flug Tag. “We’re very generous, anyway” Emina contends, but does not discount the major promotional value of such collaborations.

When asked why she thinks Popcorner has been such a success, Emina simply re-states her core belief, “Quality brings customers”. On a personal level, Emina hasno second thoughts about starting Popcorner. “Even if I make half of what I made at P&G, I’ll be happy.”