They might not be the sexiest startups, nor is their vision the most revolutionary, but ROPO (Research Online, Purchase Offline) products are among the most successful ventures in recent years. Coupon clipper platforms, digitised sale leaflets, location-based shopping apps, and product-comparison sites are attracting a lot of traffic, as well as big-time investment.

Pichler knows this pretty well by now. With Max Scheichenost, he co-founded DailyDeal (an online coupon clipper) in Austria and Switzerland. DailyDeal was originally started in Germany by the Heilemann brothers (Fabian and Ferry) about the same time as CityDeal, which was later acquired by Groupon. But in Austria, Markus and Max beat Groupon to the market. After 20 intense months of development, DailyDeal exited to Google for 114 million dollars in September 2011. “It was an indescribable moment filled with exuberant joy,” recalls Pichler.

A few months earlier, in February 2011, Pichler started working out plans for meinKauf, having discussed various business models with other investors. They noted that the German retail marketing platform KaufDA had proof-of-concept already and that the Austrian market, though smaller, shared the same structures. Kind of a no-brainer, right? But the key to success is being the first on themarket and, once launched, staying the best.

This was a lesson Markus learned during his whirlwind rise from a student to a successful entrepreneur.

The oldest of four brothers, Markus grew up in Upper Austria. His father, a hydro-electric engineer who spent 30 years working in Southeast Asia, inspired his sons to get interested in natural and physical science, so after his schooling in Linz, Markus wanted to become a doctor. “But then after doing my civil service [as a Red Cross ambulance technician], I observed some bad things – a friend of mine died and I was the first on the scene. I wasn’t sure I could handle that my whole life, being constantly surrounded by all that pain and suffering. It would have been too much for me.”

“But then I applied to the Institute for Entrepreneurship and Innovation programme at the WU and was totally stoked.” There, Markus became a Teaching Assistant and joined the student consulting company Icons, founded by Andreas Tschas (who went on to launch the Pioneers Festival), among others. “I took it over for the next generation,” he recalls. Icons landed large contracts with big established firms, “but its main goal was to bring together top students from different backgrounds in order to widen everyone’s horizons” and, in so doing, helped Austria’s emerging startup scene.

In the fall of 2009, Icons was approached by German Facebook clone StudiVZ to make a strategic concept for Austria, and Markus first met the angel investor Michael Brehm, who had been its COO and would soon become a key figure in Markus’ career.

Markus planned to finish up his studies and write his thesis in 2010. But in the first week of January, “Michael Brehm called Max Scheichenost and me and told us he’d just invested in DailyDeal. He asked us if we wanted to take it into Austria. I’d heard that Groupon had just received 30 million dollars in funding, but I was unsure about committing to the project. Initially, I wanted to do it as an internship alongside my studies, but after the first 16 hours of meetings discussing our initial strategy, it became pretty clear that it would have to go all-in.” As a result, he postponed his thesis (it remains on his to-do list). 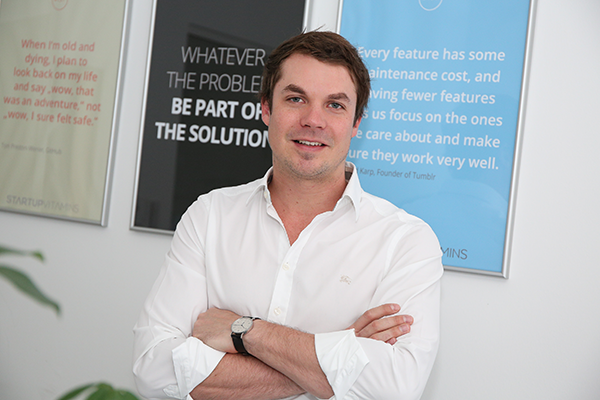 Though adopting the basic architecture from the German company, Markus and Max had to ramp up in Austria very quickly. He remembers, “we were doing everything alone: founding the company, recruiting, processes, corporate identity, sales processes, trainings…We had no time to exchange info with Berlin; we were focused on being the first in the market and driven to beat out the competition. Our credo was: if you’re not first, you lose.” He adds, “we were lucky to just do the right steps, to make the right decisions and, most of all, to recruit a great team.”

After nine months of grinding work, Markus approached Fabian Heilemann about completing the DACH package by taking DailyDeal to Switzerland, thus adding on to his already mammoth workload. “It was all crazy, 24/7, just going so fast.” The hard work paid off when investors started pouring their money in and eventually Google (after failing to acquire Groupon) made their offer.

Yet for him, personal success has come with a rather high price tag (if only the road to entrepreneurial success had bargain offers!). “I’m not sure myself if I should even talk about it,” he reflects. “Most people didn’t even notice anything was wrong even though the doctors said it was a medium to bad burn out,” which occurredshortly before DailyDeal’s exit to Google and set Markus back for over a year. Reluctant to go into too much detail about it, he confesses that it has been a slow and difficult road to recovery for this one-time swimming and track athlete, whose fit outer appearance betrays no underlying problems.

From bottom-up to top-down

Along with partners Scheichenost and Dirk van Quaquebecke, Markus founded Alps Ventures in August 2011 and provided the seed money for meinKauf. With over 400.000 monthly unique visitors, meinKauf has expanded to Hungary and Turkey, d.b.a. “miKunu.” Taken together, it has now attracted 2.3 million euros in investment since its 2012 launch, including a recent 1.5 million euros round“, and is close to be profitable, Markus claims. “Our goal is to be in the black by the first or second quarter 2014.” He adds “we’re considering another round of financing: first, to strengthen our current growth in Austria, Hungary and Turkey; second, to develop even better technology; and third, to enter new markets.”

The meinKauf team Photo credit: meinKauf.atOther than meinKauf, their only other Austrian venture to date has been Clusterhaus – a tech startup hub with incubator spaces in Vienna, Cologne and Bratislava (more to come). Rather, Alps Ventures has been focusing on the bustling Southeast Asian startup scene, developing docdoc (based on the US-based zocdoc model) and StyleProfile, out of Scheichenost’s Singapore base, as well as founding Duriana (a mobile marketplace app that just announced an investment round of 800.000 dollars) while renting a villa in Bali. “We took a lean approach, using only our own capital not taking foreign investment. We are building our portfolio, but our development approach is now top-down.”

Though he had some self-doubt at first, his inner entrepreneurial fire was too strong for him not to return to the game. Markus has now taken steps to avoid a repeat burnout. “I have friends and family who will recognise the symptoms and stop me before I get too far gone. Now I’ve established a better work structure and allow myself to listen to my body and my mind. I never did that before.”

However, it was helping out others in need that originally made Markus want to become a doctor. Has his entrepreneurial experience satisfied this inner need? While he claims to get “satisfaction creating progress every day for the business models we have, thinking about new ones and how to change the world for the better,” he recently started trying to involve himself more in charities and social responsibility, and would like to teach again. “I hope I have some time left to get it going!”