A frame of mind 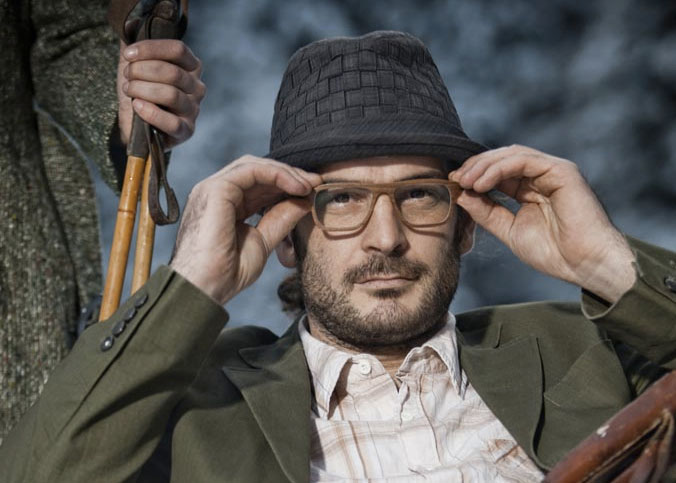 In the beginning, there was a basement, a young Austrian man and a converted milking machine. This basement was located in the house of the Wolf family in a tiny mountain village in the middle of the Alps in Tyrol. The year was 2007 and Roland Wolf, our protagonist, had just decided to end his career at a hip eyewear brand in Berlin to create something new and different. Up until then, the ingredients used for frame building had been confined mainly to acetate, metal and man-made materials. A true nature-boy, who had grown up in the mountains, Roland wanted to create frames entirely built out of the organic matter – without screws or other metal parts. For this purpose, he constructed his own sanding and pressing machines.

What followed was a two-year process of fiddling around with wood to create comfortable and stylish frames. The design part was taken over by Roland’s girlfriend Marija Iljazovic. Her brother Martin joined Roland as co-CEO and Roland’s brother Christian took charge of marketing. The result of the research and development was the first ROLF collection with an innovative glass fixing system – the frames are made from layered wood veneer, are sealed and have a wooden hinge that allows them to completely avoid the use of metal and plastic.

Two years after starting out, the founders were en route to Paris. Their mission: to present their frames at the SILMO fair, one of the most prestigious events of the eyewear industry. “We didn’t have enough money to afford hotel rooms so we had to camp outside of Paris and even brought our own food,” he recalls. “Then we sold our first couple of frames. And about eight hours later we won the SILMO d’Or, which is like the Oscar of the optometric industry. It was incredible. After we got the award, people were basically plundering our booth. We sold hundreds of frames within hours.”

The success upon ROLF’s début, however, led to a practical problem: “We could see that the demand for our frames was there, but had no idea how we should follow up with production. We didn’t even have time to celebrate.” After Paris, ROLF Spectacles received a 30.000-euro bank loan, which somewhat alleviated the financial issues. Initially, banks had turned down their requests. “They just laughed at us, when we presented our idea,” Roland says. So he and Marija turned to the famous Three Fs for seedfunding. Roland’s father paid out part of his son’s future inheritance and took a mortgage on the house, leaving ROLF with a starting capital of 50.000 euros.

Another supportive factor was the involvement of CAST, the Center for Academic Spin-Offs Tyrol, that helped them write up their business plan and get funding from AWS. While Roland was grateful for the support, he emphasises that he didn’t follow all of CAST’s offers religiously. “I think you can say that we’re not your average startup. We already had a pretty clear idea about how we were going to do certain things, like our marketing, so I wouldn’t let other ideas get in the way of that”, he says. 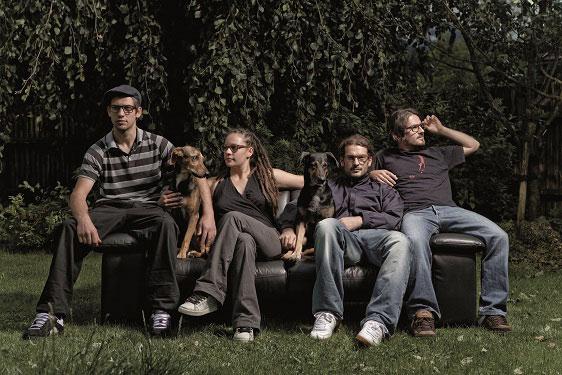 Over the past few years, the startup has grown to 35 members and is essentially still a family business. According to Roland, this is an advantage: There is a high level of trust and accountability among the founding team, who were also O.K. with working for free for the first few years. The fact that they did not have to pay rent for father Wolf’s basement was an additional plus. Roland himself was the only one in charge of cutting the spectacle frames in the first two years of running operations and he is still a vital part of the tedious production process of altogether 78 work steps.

“It gives me a lot of joy and also strength to sit in the basement and just work on the product,” he says. “We really just get started where other producers stop.” This strength is much needed when considering the competition for wooden frames that has evolved over the last four years. “There wasn’t really anyone else who was doing what we were doing when we started out. But soon enough other brands were copying our products. One company even copied our website. It is quite a tough business.” Basing production in low-cost countries as well as compromising on workmanship and materials means that ROLF’s rivals can produce at a much lower cost. Ranging from 650 euros to up to 3.500 euros, ROLF Spectacles are not exactly a bargain.

Yet, Roland believes the price is justified and that ROLF are at an competitive advantage because of their quality and innovative ideas. One of them was creating a frame out of “woodstone” – the first of its kind. “It was borderline insane. Getting production started was so expensive, we didn’t have any budget to advertise the specs.” But it worked. The innovative stone frames that start at 2.500 euros a piece received considerable media coverage because ROLF managed to create a myth around it, as Roland believes. Perhaps more importantly, “the customer feedback has been incredible. We received emails from people, who called them the best frames they have ever owned.”

The typical ROLF clients are 30- and 40-something financially better-off individuals, who want eyewear that is different but wearable, Roland explains. In his native Lech valley in Tyrol, however, ROLF Spectacles have become a bit of a local status symbol across all income and age groups. “The local gas station owner wears ROLF. Kids are begging their parents to get a pair of our frames for special occasions.” But also the Wolf brothers’ father, a retired teacher, wears his frames with pride. “He had to put up with me throughout my youth and I can tell you that was not an easy time. I caused quite a bit of trouble. So I’m happy to be able to give something back to him.”

Much against the notion of home-turf advantage, ROLF actually seems to be haunted by the Wolf brothers’ reputation as teenage scallywags. “People know us from when we were growing up and some of them don’t like the fact that we stirred up shit as kids and still became successful. And then, we look the way we look,” he refers to the founding team’s casual snowboarder style. This seems to be the reason why, despite having created jobs through their factory in Weißenbach, the mayor has been standing against their plans to erect a new production site, which would provide jobs for more than 100 people, as Roland says. According to him, the municipality would prefer to build flats on the property ROLF intends to buy for their expansion. It may appear irrational, but it also seems to be a manifestation of the often-cited Tyrolean stubbornness. 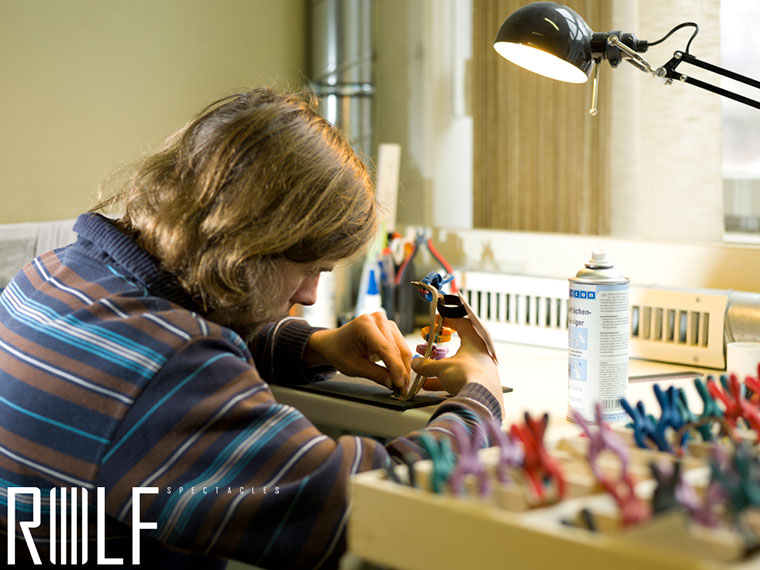 Roland is not short of it, either. “I don’t really care what the mayor says. 95 percent of our sales are exports, we don’t depend on the municipality, let alone the Austrian market. As much as we love Tyrol, if we can’t grow our company here, we’ll have to move elsewhere, for instance to Germany, where we’ve actually received offers. There is a lack of appreciation for what we’re doing in Tyrol – in the eyes of some of the locals here we’re just a bunch of crazy potheads. Sometimes I think they’d rather have us sell sausages and be more normal.”

It seems to have been this cocky attitude that landed Roland his first job in the eyewear industry, after working as a greenkeeper, a snowboard teacher, a metal labourer, a car restorer and starting an apprenticeship to become an optician. “In 2002, I met the founder of [spectacle brand] IC Berlin at a party. I was drunk, but he seems to have liked me,” he recalls. ROLF benefits from Roland’s experience at IC, where he was in charge of distribution. Once the company grew “too big”, as he puts it, he wanted to start something of his own. Now, Roland is continuing what he learned in his previous job: keeping close contact with stockists and giving them individual briefings about the frames, their production and the company history, even if that involves travelling across the ocean. “Our customers sense that there’s a story behind our product and they like that. As competition gets harsher, it becomes more difficult to maintain ourstatus but it just means I have to work harder to train my opticians and turn them into specialists,” he argues.

“We’re so consequent in our approach to doing business it hurts,” the CEO explains ROLF Spectacles’ strategy. “Unlike the majority of our rivals, we produce our frames locally and we try to avoid suppliers at all cost. Even our photo shootings are in-house.” Frustrated with the eyewear industry, where three corporations dominate 80 percent of the market and glasses with a “Made in Germany” tag may be built from parts produced in China, Roland points out the ethical aspect to his startup. “We have a responsibility towards our customers. It’s terrible how people are handling resources.”

A further difference to other producers seems to be their independence from current trends. “The good thing about living in the middle of the mountains is that there is no influence from the fashion world that could affect or bias our style. We try not to look at what other spec companies are making because we want to remain independent. We orient our products towards classic design.”

Keeping up the principle of exclusivity of the premium brand, ROLF Spectacles are sold in handpicked stores in 24 countries worldwide, with the biggest markets in Switzerland, the Netherlands, Belgium, Germany, Italy and the US. “Yeah, they’re expensive,” Roland says, “but we don’t care about that. We strive for perfection and the price is really in the background.” In 2012, ROLF made revenue running into the seven figures. This year, they expect it to double. Naturally, expansion requires capital but investors are not an option. “We’re doing whatever the hell we want to and are not letting ourselves get bought,” he says with that slightly rough but charming Tyrolean attitude.