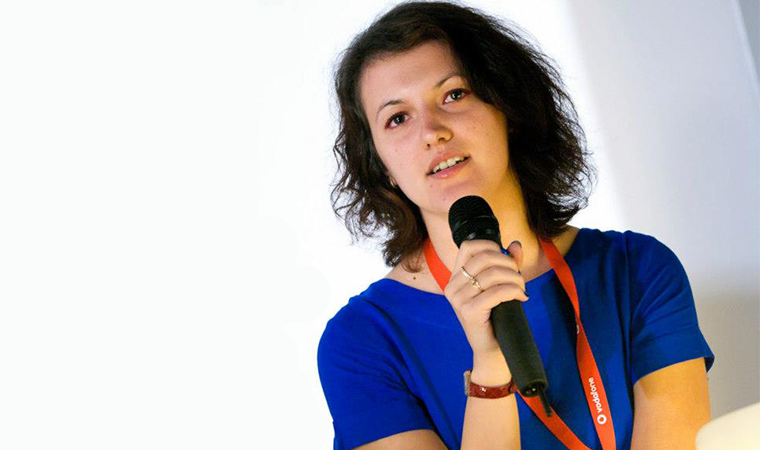 Calling herself a “rebel against regular rules” Adelina Peltea is no one who settles easily. Seeing the value in challenges and struggles, she believes in hard work and determination; in not giving up. Yet, in December 2013, the 26-year-old Romanian had to learn how to give up on her startup – without giving up on herself.

Being someone “who sees opportunities all over,” Adelina always knew that she wanted to create, to build. “Even with a steady job, my own schedule has never been 9am – 6pm,” she says. “I simply don’t function like that.”

After finishing her marketing degree in Bucharest, Adelina first got a glimpse of the entrepreneurial world when she joined “JADE” (European Confederation of Junior Enterprises), a EU-funded organisation to foster entrepreneurship among young people. Heading the organisation for a year, Adelina learned how to run a business while building a network on a European level.

She had smelled blood – and wanted more.

Upon returning to her native Romania, Adelina founded her first startup, internshipin.ro, a platform for students to find internships in Romania. Launched at the beginning of 2011, the venture recorded sales from the first month of activity onwards, with clients ranging from corporates and Romanian startups to other SMEs.

“As a recruitment-based product, internshipin.ro was not very technical. We were educating the market,” says Adelina. “As such, we did not care so much about numbers.” At the time, she and her team were not looking for investment either. “It was all revenue-based.” With three co-founders and two additional employees, they were a small team, none of them working full-time on theproject. “Internshipin.ro was a side project for all of us,” says the Romanian entrepreneur – a side project that grew slowly, but steadily, reaching around 3.000 users. When Adelina and the venture’s business developer moved out of the country in the spring of 2012, however, there was no one to take over, causing the site to close down.

With the knowledge she had gained as a result of her first entrepreneurial experience, Adelina decided to move on to bigger and, as she hoped, better things. “I wanted to launch a startup in continuation of my first venture, but on a global level.”

The concept behind splinter.me was to help companies find the person they needed for their enterprise. It was planned as a more technical venture, a “big data business” that was to focus heavily on analysing and extracting information of what people share on social media to create profiles on splinter.me.

By chance, she met her co-founder-to-be, Ahmed El Hussaini, in Egypt while interviewing people for her book Customer Seduction. “It was pure luck that we found each other. Ahmed had had the same idea and with his technological background and my marketing experience, it made sense to join forces,” says Adelina.

After two months filled with hours of Skype conversations, Adelina officially joined splinter.me – already launched by El Hussaini, as a co-founder. They were optimistic and believed in their idea: The business concept had been validated because customers were already paying for similar services, such as headhunters or job boards, and direct competitors in the US were making money as well. Therefore, “our focus was on developing a good product,” says Adelina.

This, however, turned out to be more difficult and time-consuming than Adelina had expected.

“After one year, the product was still not finished, the whole project got delayed,” says Adelina. “As a startup you are running around for a while trying to find out what works – but you should not do that forever.” For her, 12 months of ‘running around’ was definitely too long.

Splinter.me was also facing the challenge of acquiring users when the product itself was not finished. Despite constant traffic to the site, the conversion rate remained low. “We only managed to get 2000 users, which is very low on a global level,” says Adelina. “In the end, our product did not get the traction we would have wanted and needed.”

In addition to problems on the execution side, the entrepreneurs had financial difficulties. They kept on pouring money in – their personal savings – without getting much in return. Besides a small angel investment of 20.000 dollars, which was used to pay the other co-founder a small salary, splinter.me did not attract any outside investment.

With financial hardship and not enough users, things between Adelina and Ahmed El Hussaini, started turning sour. It became clear to her that her work in marketing the venture was not being appreciated. Adelina decided to resign.

“Of course things would have eventually gotten better had I continued – but my personal life, as well as my budget, was suffering. Compromising to reach only 5% of your dreams – that’s not good enough for me,” says Adelina, who describes herself as someone who has never wanted to settle with what she had.

While without regrets on the marketing side, the Romanian entrepreneur bemoans some of her business decisions. “I don’t see my resignation as a personal failure, but I do regret that I was not stronger in terms of managing things, setting deadlines, and meeting targets,” she says.

On the financial side, she regrets not having made any prior arrangements. When she decided to resign from splinter.me, Adelina found herself without a ‘prenup’ to govern what happens if someone decides to leave. After a painful fight, she ended up not receiving any shares in the venture.

“Imagine you are married with kids and you end up getting a divorce –what do you do with the kid? Splinter.me was my child. It is my work, I believed in it,” she says. And she still does. “If I had the financial capabilities I would do the same business again – with different people.”

Forging plans for the future

While splinter.me will carry on without her, the 26-year-old Romanian is determined to continue her entrepreneurial journey – on her own terms. “I can’t help it – entrepreneurship is in my blood,” she says. Thus, she is already forging plans for the future – with an important realisation in mind.

“After going through all kinds of emotional phases – denial, anger, and sadness – I finally understood that I need to look at what I’ve learnt and accomplished. All these experiences are mine. No one can take that away from me.”

And Adelina is convinced she will put these experiences to good use in her next venture. “I am not saying goodbye to the startup world for good. I already have lots of new ideas.” Until she can realise these startup ideas, however, the Romanian entrepreneur will have to restore her financial capabilities. “Fortunately, I have already received offers to work as a marketing consultant for startups,” she says.

Besides job offers, though, she has also received numerous messages of support and encouragement from around the world, and especially Europe. “My story seems to resonate with people,” says Adelina. “They appreciate my journey and my experiences, especially regarding splinter.me. To me, this is a truly outstanding shift in [entrepreneurial] culture.”

Correction: A few sentences in the intro as well as paragraphs 8 and 10 originally read that Peltea launched splinter.me together with her co-founder Ahmed El Hussaini. They have now been modified to indicate that El Hussaini had already started the venture when Peltea joined full-time. The reason for the correction was a factual inaccuracy that has now been clarified.