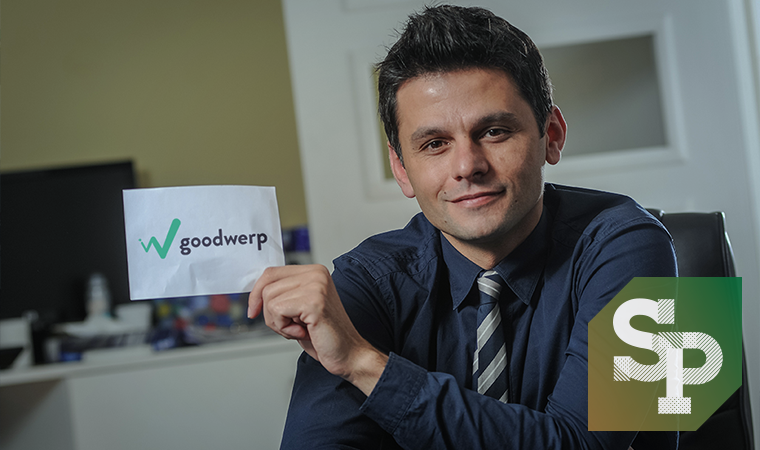 Our one-line pitch is…
Consultancies and service firms around the world can now manage their projects, teams, clients, and business operations from a single online platform.

Introduce your team, and tell us one interesting thing about each member. We are…
The team is made up of product architects, designers, developers, SEO managers, and inbound analysts. The way we came together under one roof with these specific skill sets was a pure coincidence. Before Goodwerp became a success, we ran as a creative agency working similar to the clients we serve today. Valon Sopi, founder/product architect, had the idea back in 2009 and built a working version in 2012. Everything was set to a pause until April 2013, when we decided to focus solely on building Goodwerp. Tyler Wetzel, our designer then, worked on the user-interface right before Erman Belegu, our chief software engineer, joined our team. Ideal Bakija, joined us after we had the need for another engineer who would tie-in the front and back of the application in a proper working UX. Anbullena Krasniqi and Valmir Hazeri, joined prior to launch and helped us get the word out. Lis Hoxha is our latest addition as a junior developer. We work closely together and represent a tight-knit family in quest to improving the way consultancies worldwide to manage their projects, teams, clients, and business operations online. We have been praised for being able to achieve something bigger teams struggle with. Justin Jackson of JFDI had said: “What Valon and his team have accomplished is really amazing. They’ve built a product (Goodwerp) that rivals what other (much larger teams) have produced. They identified a unique need, and executed on it perfectly.” Our team’s international experiences (education/professional), as well as prior experience in running a creative agency, have been an asset in our global customer outreach efforts. To kill some time and relax our brain cells we hold mouth-watering & nail-biting dart tournaments, right at our office. 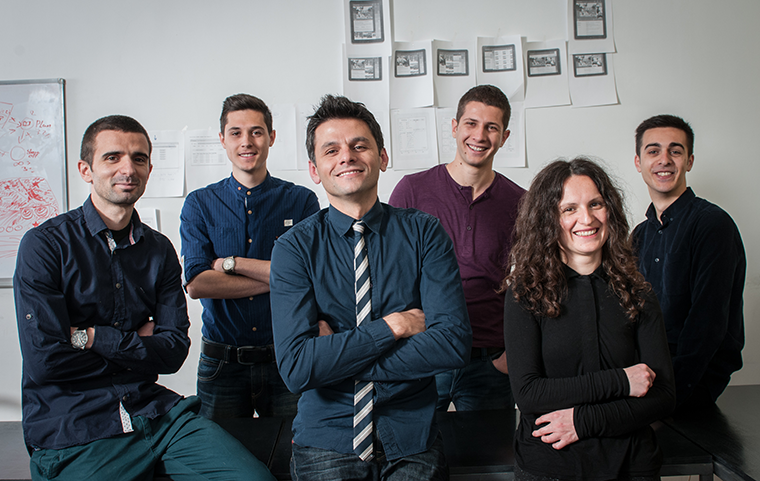 Photo credit: Samir KarahodaThe real pain about starting a business in Kosovo is…
Constantly needing visas for our entire staff to fly out to events we’re invited to. Other than that, setting up a legal entity in Pristina is fairly simple and it takes less than a day. Also, there are so many talented developers and tech enthusiast who can join our team on short-notice as we scale up our business. The sheer knowledge and global success is present in each development company.

The person that inspires us is…
For us is a firm: Facebook, not for the reasons you might think, but because after all these years and billions in investments and revenue they are never comfortable, iterate new ideas quickly, constantly release new updates and fixes, are not afraid to fall flat in their faces, and try to reinvent themselves all the time. To this day, they still consider themselves a startup.

The one thing we would save from our burning office is…
Most probably our dartboard, which through its wear and tear marks, represents our early humbling days. 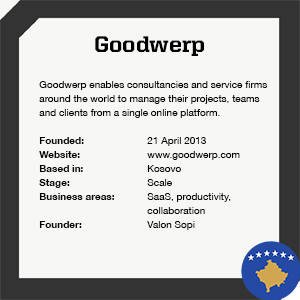 The one thing that will make us quit is…
The world ending.

Our inside joke is…
Whenever we find a glitch in our system, the saying goes — “It’s not a bug, it’s a feature!”

You might not believe it, but we…
Got our first paying client six weeks after we launched our public beta.

We’ll call ourselves successful when…
All consultancies around the world use Goodwerp to manage their business the same way they rely on their Email client to communicate with others.

The startup we really want to see on inventures’ Startup Pick is…
Enolyse . A startup based in Slovenia which is innovating the way wineries make their wine.

Visit www.goodwerp.com to get in touch.

Learning from an e-learning business 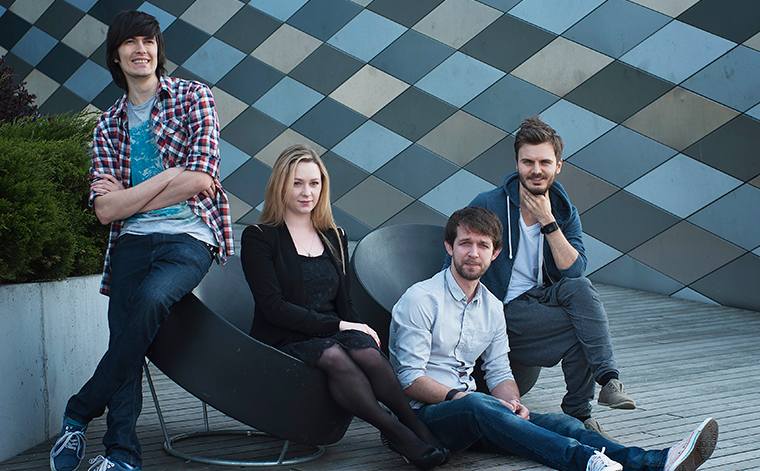 Mantas is spending the Easter long weekend away from work, in his remote cabin 100 kilometres from Vilnius. Tethering his devices to his phone, he stays in touch but out of reach, of a life he seems to have made happily busy. The cabin is small and provides a nice space for him to stay and relax, and be creative. This is what is paramount for this founder. Earlier in his career, Mantas discovered the benefits of a positive and creative work environment, which is what he set out to replicate for himself when he began his life as an entrepreneur.

Working at Forticom, a major owner of many Russian and Baltic social networking platforms, provided Mantas with a rich environment to create “cool projects”, as he puts it, within social media platforms. He speaks about his time there passionately and he clearly appreciates the experience. “I had a really excellent CEO, and was surrounded by really creative people, when I was laid off I realised I wouldn’t get the same type of engagement I had there,” he says. After working there for two years, Mantas was concerned about the loss of his former work environment and colleagues, and was determined to replicate what he had found there. His thinking was that if you could choose your team, and create your own environment, then creativity would have no limits. Companies have strict rules, but as an entrepreneur there is no ceiling. “I wanted to work with creative, idea-driven people, people so great you can even ignore their weird behaviour.”

In 2010, he started Eruditus from a project he was working on at Forticom, an educational social network and e-learning platform. Mantas had noted, that while K-12 students spent time googling info for their school projects, they didn’t want to have to leave their social networks to study. Admittedly, he himself dropped out of university courses three different times, and so he believed that if you could create an engaging environment, that could make education much more appealing.

Mantas planned to create an e-learning resource and sharing platform integrated with Facebook. With this vision, no product, nine months and several funding rounds, he ultimately found three investors that contributed 400.000 euros. Happy days. Eruditus teamed up with Young Digital Planet, an educational publisher, and launched myeverClass in September 2011. It was an e-learning platform integrated with Facebook, it gave tools and resources for learning, and a social platform for sharing and communicating, for free. For a small fee you could also access more content.

“At the beginning when you get funding you think [you’re] on top of the world, then after a year you think [you’re] not even in the middle.” In Lithuania, the deal is simple: You cannot afford to fail – there are so few investors that you will never get money again. Then Eruditus failed. They had launched in the UK, Lithuania and Poland and nothing had happened, zero traction. They soon realised their problem was targeting children that were spoilt for education and had no passion for it. “Education in the UK and Europe is everywhere and it isn’t valued,” says Mantas. Students didn’t want to work while on Facebook – who would have thought! Eruditus was in free-fall, with no plan B, and haemorrhaging investor euros.

Four months after launch, a Lebanon based e-learning company, approached myeverClass. Theyhad seen a press release about the product from Eruditus’ partner Young Digital Planet and were interested in a partnership. That one press release saved the company and some very nervous investors, and Eruditus didn’t even send it. After a short negotiation, Eruditus ultimately signed a licensing deal for the entire Middle East with Global Learning. Then comes along some more luck. Global Learning relocated to the United Arab Emirates (UAE) and managed to sign a deal, using Eruditus’ SaaS, with Hamdan Bin Mohammed University in Dubai. They are working together to develop Cloud Campus, an e-learning platform to increase literacy throughout the Middle East and Africa.

Mantas has no idea how Global Learning and HBM University teamed up, but he is very pleased they did. Currently, Cloud Campus is in operation, with free and premium subscriptions in the UAE and Kuwait. In a month, it will be operational in Ghana, Lebanon, and Pakistan, with Eruditus on a licensing fee, Mantas is happy to see that list grow. The implementation of Eruditus’ software looks slick, and the tech is aimed at an older demo than originally planned by Mantas. Eruditus has found its product market fit. A new market, and a product pivot, increased its profit by 450 percent in 2013 compared to 2012.

Eruditus has recently pivoted from its core focus of an educational software solution to include an enterprise social media platform in its portfolio of products – Loomideck. While the team were gearing up their product for usage with Cloud Campus, they came across another problem that needed solving. They were using Skype to communicate and send files for work; this soon became cumbersome, as scrolling through days of messages for info was unfeasible. With an acute attention to detail Mantas looked at his own office, and tried to understand exactly how they worked – conversations, tasks and file sharing. He knew of other solutions that could remedy their problem, but none had a “beautiful interface” that more truly reflected real-world social interaction. According to him, “Beautiful things inspire people to create more beautiful things, and be an inspiration in itself.”

Loomideck was Eruditus’ solution and they started development in January 2013. The solution is a combination of Skype, Dropbox, Basecamp, Tasks, and a newsfeed. It started life as a backstage product, i.e. hidden from their investors, and remained so for most ofits development. Investors, it seems, can be very nervous and sceptical when new products are conceived, especially when they have nearly lost their investment once already. After 12 months, Loomideck went out in a free beta version in February this year.

Mantas knows that there are many SaaS products on the market that do a similar thing to Loomideck, but none are as beautiful or as simple, he says. From their public beta they were featured on just two sites – abduzeedo.com and webdesignledger.com. And that was all they needed. The traction from those two sites alone gained them enough media attention, and early adoption, to soften up their investors so they could ramp up the development. Loomideck is set for a full release on the 25 February. When new users register, they need to invite fellow members of a project to join the ‘Team’ – one new user immediately becomes two or more, which is a nice model for encouraging exponential growth.

Currently the platform has almost 1.500 registered users and a 20% conversion rate to active ones, with SaaS rates usually at 10%, Loomideck are sitting nicely. “It seems that perfectly crafted design is exactly what was missing in collaboration, projects management and enterprise social networking markets,” says Mantas. He and his team have an even slicker design and speed enhancements being released in the first version, and want to work towards a one-click video conference feature in the near future. “Our one focus was to create an astonishing product, but now we will strike,” he says.

Mantas is passionate about creativity and simplicity, and he sees it as an extension of how he likes to work. For Loomideck to survive, they will have to follow their vision of being the “most beautiful” to set themselves apart in a crowded marketplace. At the time being, Mantas seems to just be enjoying the journey, learning and moving forward. It’s like he’s almost impervious to failure – must be the superhero name.