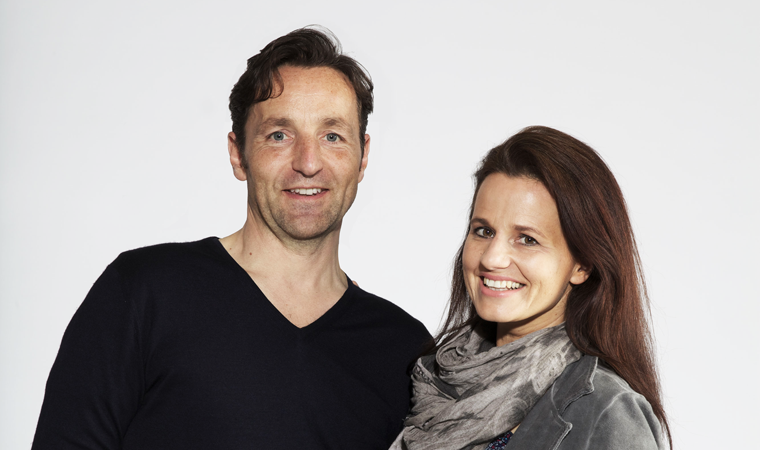 It all began six years ago – with Jasmin’s two children, her new role as a mother and housewife, and memories of her grandmother’s aprons. At age 34, with two young children and a husband, Jasmin suddenly found herself spending most of her time in the kitchen, cleaning, and doing chores around the house. “I was successful in my job as a graphic designer, but when my children were born, I suddenly felt like my life was happening on the sidelines,” she says. “SoI thought to myself: It must be possible to do both – to have a family and to fulfil yourself professionally.”

“Everyone needs to cook, clean, or do the dishes every once in a while – so each of us has a little bit of a housewife in her- or himself,” says Jasmin. “Why not make it a bit more fun?” she describes the thought process that eventually led to her creating Sheela, a brand for fresh, colourful, and modern aprons. Having taken sewing classes in high school, she knew the basics and set out to design and sew the first prototypes, which she then sold at Christmas markets in Salzburg. What followed was a showcase at Vienna Fashion Week in 2009, multiple other trade fairs, great feedback, several pre-orders – and a rude awakening.

Lots of demand, not enough supply

By the end of 2012, Jasmin had sold around 4.000 aprons, the business was recording figures in the black, demand was rising and rising – and Jasmin was completely exhausted. She simply couldn’t meet the demand. “I didn’t have enough capital to pre-finance the acquisition of fabrics, pay for production and storage, rent an office, and employ someone to help me get the business up and running,” she says. When all the stress of having to run the business all by herself started taking a toll on her health, she decided to temporarily suspend the business. “I just couldn’t do it anymore. All the success doesn’t mean anything if you fall by the wayside.”

Being her hard-working and ambitious self, Jasmin had set out not only to realise her own professional dreams by designing aprons but also to change the image of stay-at-home moms and women in general – a housewife revolution of sorts. Looking back, the 40-year-old Austrian realises it might have been too big of a project to take on without a business partner or employees. “Design, bookkeeping, packaging, sales, distribution – I was doing everything by myself.” Jasmin had invested a high five-digit figure in Sheela. “I made beginner’s mistakes and lost a lot of money,” she says.

After temporarily suspending her business, Jasmin worked as a ski instructor for a while to earn money in order to pay off the debt from Sheela and to get a break from aprons. Skiing through glistening fields of deep snow turned out to be exactly what she needed. “It was like therapy for me,” she says. Slowly recovering, Jasmin then started working on an apron-book with patterns and matching recipes and in June, she gave an interview about her failure to pull off the business to brand1, a German business magazine. She was getting back up on her feet. Right after the publication of the article, Jasmin starting receiving daily messages of support and encouragement, which went on for months. Among those calls, e-mails, and letters were also messages from people offering their services, asking to become her business partner.

Jasmin realised it was time for housewife revolution 2.0. 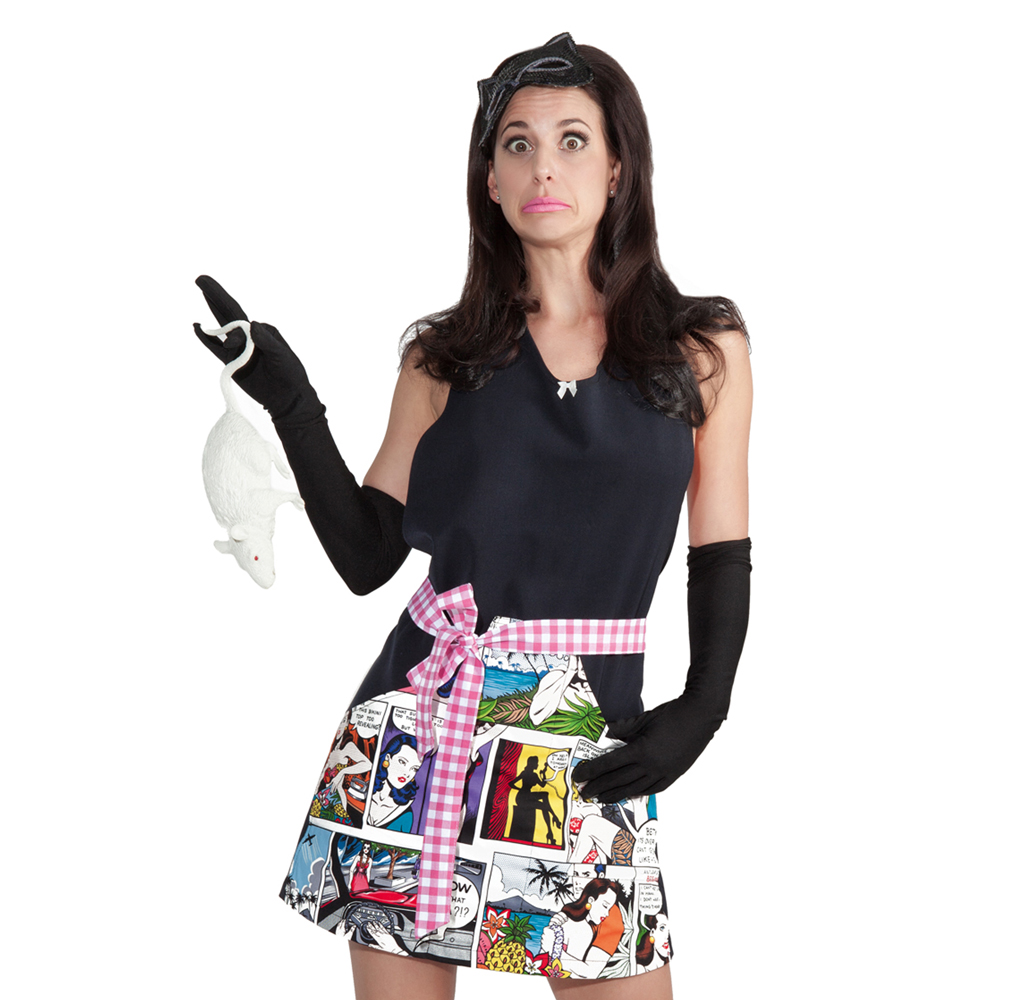 Photo credit: SHEELA OG“There were so many people, I basically had to organise some sort of a casting,” she says. In the end, Jasmin skyped with or met around 80 “applicants”. “Each of them had something to offer, but I said to myself: If I continue, then only with someone I have good chemistry with,” she remembers. At the end of the 2013, Jasmin decided to go for Werner Schmid-Barnden, a former CFO of Yahoo Europe from Munich who’d been active as a business angel since 2009.

“Although Sheela is starting over, we’re not starting from scratch. We have know-how,” she says. Determined to learn the lessons from her past experiences, Jasmin was thus adamant about setting clear rules and pre-conditions forthe business partnership.  “I knew that if I did this again, things needed to change – for the better. I didn’t want to be stuck in the same structures […] and be a lone warrior forever.”

So first, she decided that there needed to be a clear division of labour and that she didn’t want to have anything to do with financial and business-related aspects of the enterprise. Thus, when Jasmin and her business partner founded a joint venture in February this year, with both of them owning half of the company, tasks and roles were clearly delineated. From now on, her business partner will be responsible for the business-related aspects of the enterprise, while Jasmin will be working on the creative part and on representing the brand. And she remains the sole owner of the registered Sheela-brand. “After six years of hard work on Sheela, I simply didn’t want to give up control of the brand,” she says.

Saalfelden for the win

Another rule Jasmin set out when entering into the partnership with Schmid-Barnden was that she would stay in Saalfelden – despite the difficulties she had faced running her business from the small town in the Austrian federal state of Salzburg during her first attempt with Sheela.

“The infrastructure was definitely a problem then – for example, I always had to drive to Salzburg or all the way to Vienna for business meetings, […] I didn’t have access to university students who could do temp jobs, and lots of funding opportunities are only given to businesses located in Vienna,” she says. “But Saalfelden is the centre of my life – this is where my family is, this is where I want to work.”

In order to make things work in Saalfelden and to give Jasmin more space – psychologically and geographically -, the duo started renting a studio in the town. Before then, Jasmin had run the whole business out of her house in Saalfelden, where she lives with her husband and two children, who are now eight and nine years old.

The new collection – including several new apron designs for women (Sheela), as well as men (Diego) and children – came out on 15 May. For now, the aprons are sold through the Sheela-online shop, but Jasmin and her business partner are also working on further expanding cooperation with trade partners and retailers. Ninety percent of her aprons are produced in Austria, the rest in the Czech Republic. She wants her business to grow but in a sustainable way. “The point is, I don’t want my products to be quick and cheap, I want to leave something behind for my children,” she says.

For now, Jasmin and her business partner are still in a transitioning phase, with him finishing two other projects, and her working as a screen designer for an internet company 18 hours a week to pay off the debt from her first Sheela venture. In the near future, however, Jasmin wants to be able to focus exclusively on Sheela, the housewife revolution – and her family, of course. In February, they went on vacation for a whole month – “to charge my batteries,” she says. “I don’t want to ever return to the point where my batteries are completely empty.” Her message to other founders is therefore quite straightforward: “Show endurance, get up when you fall, believe in your business – but don’t forget to live.”