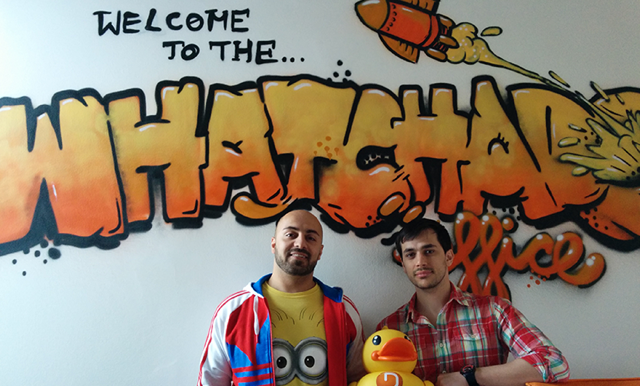 It has been almost three months since Austrian startup WHATCHADO received a big portion of smart money, as co-founder Ali Mahlodji likes to put it. inventures.eu visited the video-CV producing team that grew from four to 30 employees within two years and recently rented out an entire floor for their Viennese office. Apart from WHATCHADO’s expansion plans to conquer the world, we gained insight into what has changed for them since the near one-million investment in January and what they expect from their investors.

With the recent financing still fresh in their minds, CFO Lucanus Polakgnoli and Ali Mahlodji point out one very important aspect that they were looking for in their investors: “We wanted to get smart money. With that, we mean not just sheer capital but also contacts, connections and expertise,” said Polakgnoli. “We need networks more than money, to be honest. We have to consider that for us, contacts to Germany are worth more than some 50,000 euros,” added Mahlodji.

But what have they been using the capital for so far? “It has three purposes,” said Polakgnoli: “First and most important, we finance our expansion plans. We also use it for evening out occurring losses and to strengthen our liquidity. ”

‘Consider me your firstcustomer’

Their first step abroad is Germany. This makes sense, said Mahlodji, as it is basically a market ten times as big as the Austrian and, even given some non-negligible cultural differences, it can be approached similarly. However, the human resources-revolutionists were almost impelled to come to Germany: “I was at a congress in Hamburg and a HR manager of Deutsche Bahn approached me and asked if we already had plans to expand to Germany.” Mahlodji told him that they would only do so once they had their first customer. “Well then, consider me your first customer!” the HR manager replied.

Already last year, some 15 potential clients from Germany knocked on WHATCHADO’s door. Among them big players such as Deutsche Bahn, Tchibo, Deutsche Bank and Microsoft. “We want to reach firms that think about recruiting in a modern way,” said Mahlodji. Rumour has it that if everything works well in Germany, the startup plans to expand in a six-month rhythm to other markets such as the UK or Spain. “This is just one possibility,” said Mahlodji: “We don’t want to get too stiff in our thinking. If we are successful and super busy in Germany, we might just concentrate on fostering our position there instead of moving on right away.” Nevertheless, the team is making sure to be well prepared for their expansion plans.

Your idea today is their idea tomorrow

When it comes to the question how the merely two-and-a-half-year-old startup wants to protect its business idea, the answer is swift. “We try to be fast,” said Mahlodji and added: “You can still try to put yourself over the top with some patents or sophisticated server technologies but eventually, everything can be copied.” One very big aspect are the B2B contacts. “We have a strong client stock in the B2B segment and these connections, these personal relationships are crucial; they can’t be copied.”

So what is the most remarkable thing that has changed? The development from an early-stage startup residing in a 16-square-metre room to a mature organisation with 30 employees and 13 different nationalities seems to have been quick. “At the beginning, we had no organigram, now we need to have one,” said Mahlodji. “Still, I hope I will never say ‘we are finished’ because then we would stop being creative.”