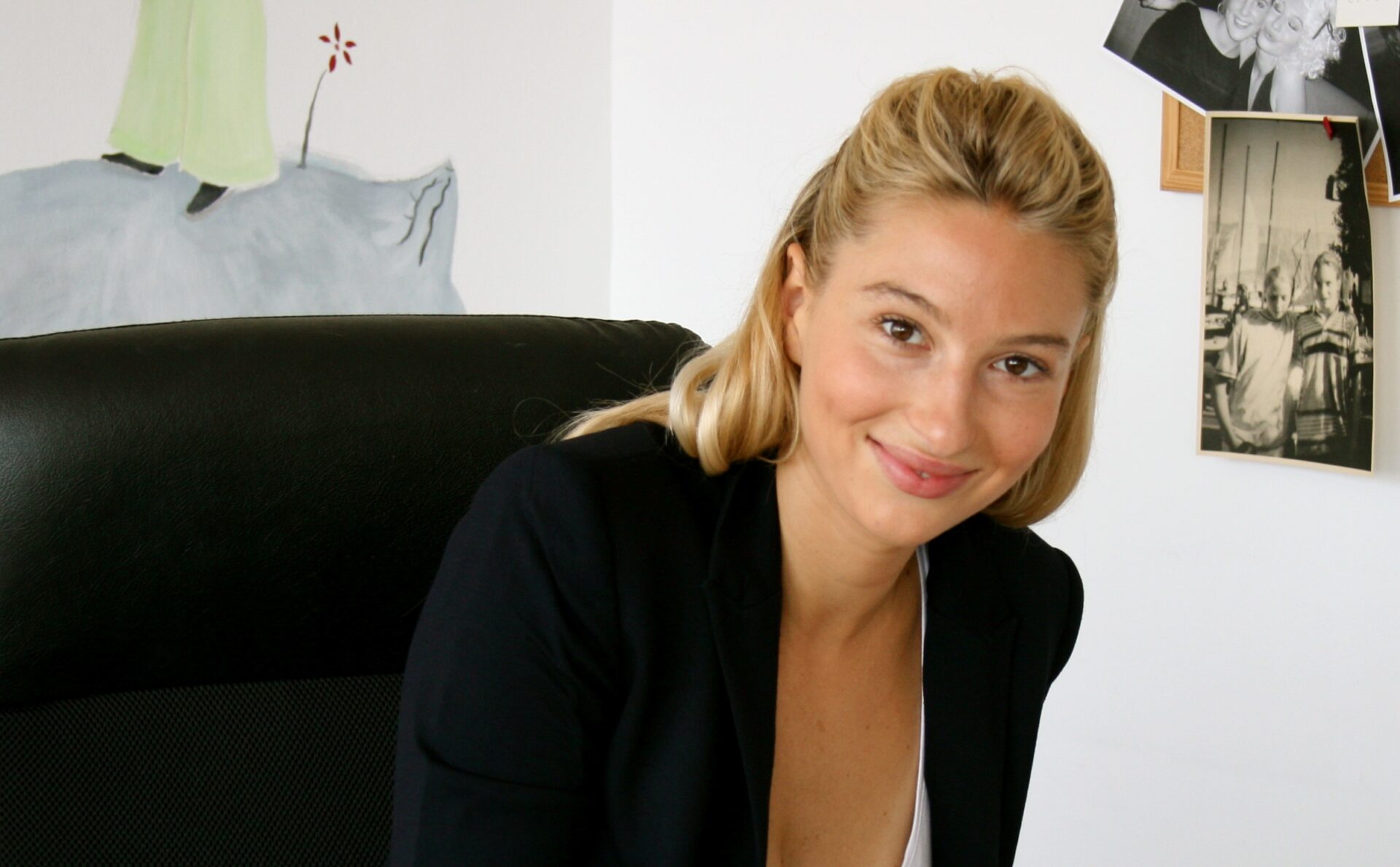 With its patented ‘bionic finger’ page-turning technology, Qidenus has been one of Austria’s most successful tech companies of recent years. Sofie Quidenus (30) has been running the business for almost a decade and believes that “the moment you’re ready to quit is usually the one right before the miracle happens.”

Sophie Quidenus, founder and CEO of Qidenus Technologies. Photo: Silvia Gattin “If you met me in private, you’d never guess my profession,” Sofie Quidenus says. The bubbly young woman might not be how one would imagine the founder and CEO of a robotics company specialised in automated page-turners. In her elegant trouser suit combo, she would fit into a marketing agency or a consulting firm in the centre of the city, but an old office building in Vienna’s arguably less glamourous ‘Transdanubia’? 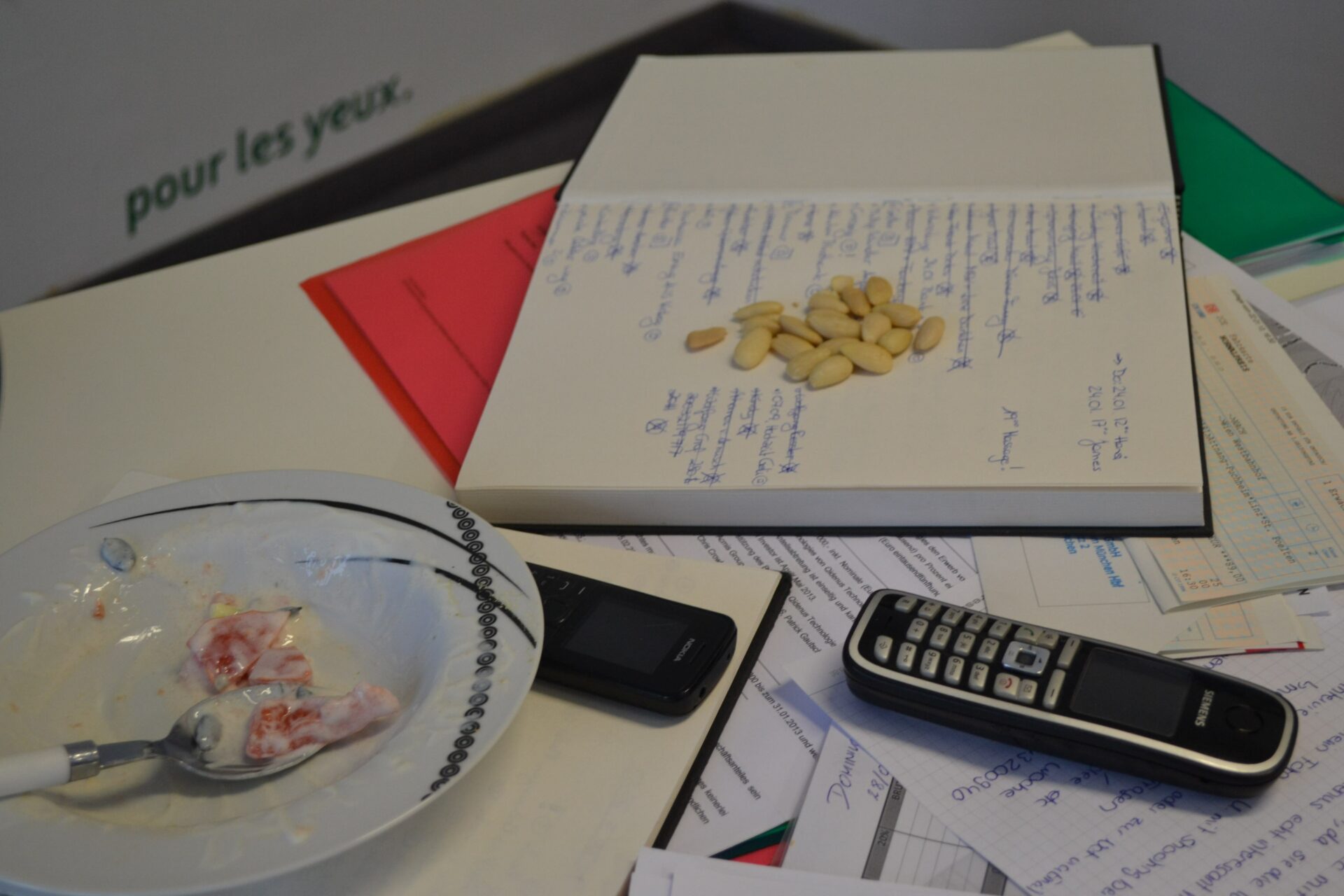 Sofie’s desk: nuts and phones that cannot receive emails“Many people wouldn’t believe that I have my own business, but that’s alright. I don’t really talk about my job outside of work,” the 32-year-old elaborates. In the startup scene, where founders like to emphasise how turning their passions into professions practically makes the boundaries between work and free time obsolete, a statement like this may appear controversial. But for the Viennese entrepreneur, it does not seem to be a sign of lacking passion for her job. Rather, it shows a certain maturity resulting from routine. Sofie has been running thecompany for long enough to have figured out what works best for her – using old school mobiles instead of smart phones, for instance, “because they cannot receive emails.” Today, however, seems to be somewhat of an exception. 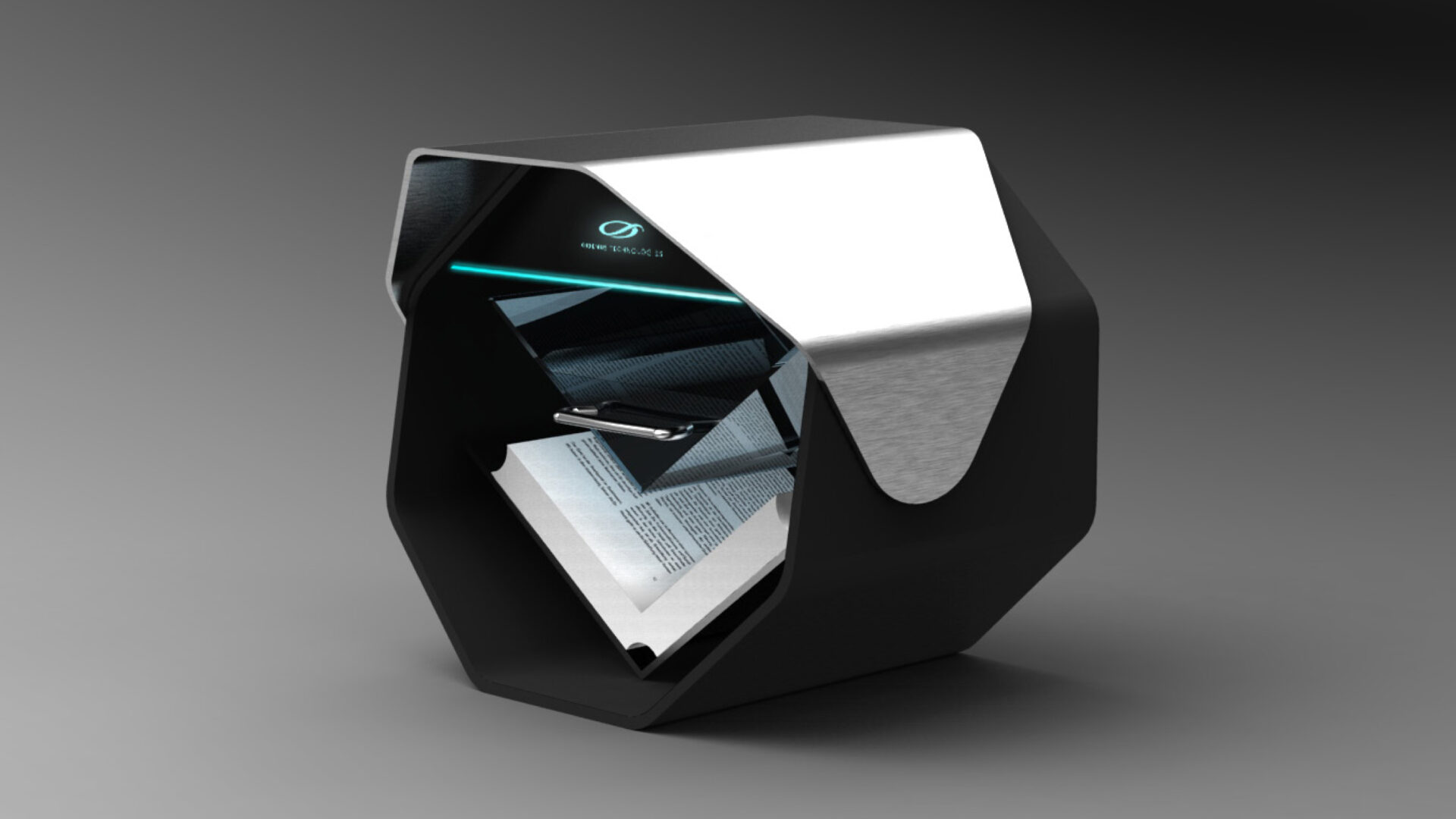 With Smart Book Scan, Qidenus reach out to the private consumer market forbook digitisation. Photo: Qidenus Technologies“I’m a little stressed and overworked at the moment,” Sofie apologises to then correct my initial impression of her, “Also, I don’t usually dress this conservatively. I had a meeting with our bank this morning. These days, I get in at about 6am and leave at 11pm, but that’s an exceptional state. We’re in the middle of finalising our preparations for the CeBit.” As she tells me about Qidenus’ latest product, the Smart Book Scan, which will be presented at the tech fair in Hannover next week, Sofie’s mood springs back to fantastic. “It’s great,” she exclaims excitedly. “Up to now, we’ve focused on business customers like big archives and libraries with our automated book scanners but this one will be for home use. And the design is really cool.” 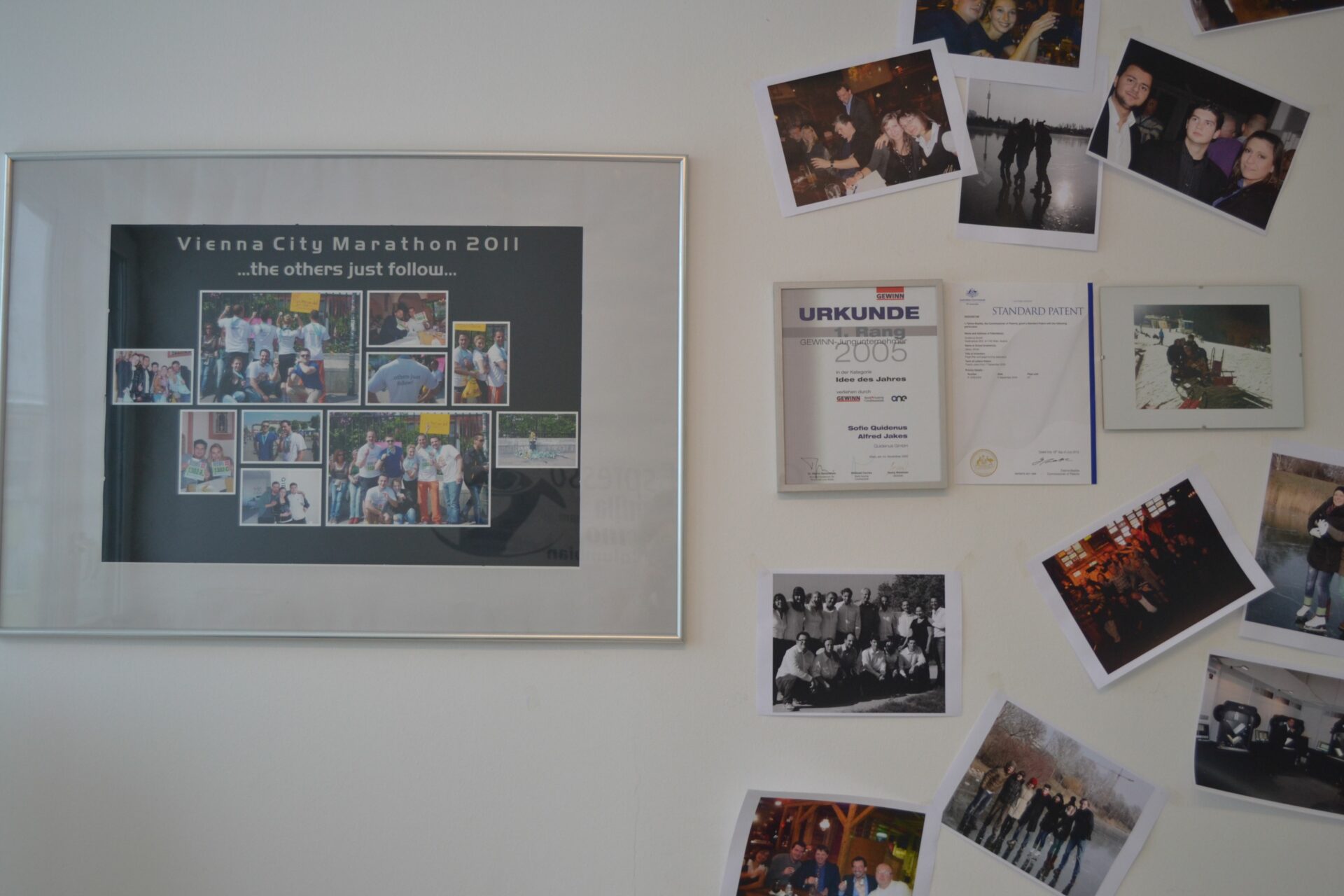 A team of running enthusiastsGetting back to the topic of her current work schedule, which she is “not proud of”, Sofie explains, “That’s what you do for the first three years of running your business, perhaps. But then you realise that it doesn’t work and that it’s not healthy.” Health as well as work/life balance appear to be important values at Qidenus. As photos adorning the walls confirm, the Qidenus team is rather fit. “We’re big running enthusiasts and join the Vienna City Marathon every year. This is actually why we settled down in this old office building next to the Danube river, which we bought in 2011. The area is perfect for running.” It is also visible from the nutritiously well-balanced salad (vegetables, joghurt, nuts) that Sofie assembles as we talk. The relaxed atmosphere between the CEO and her mostly twenty-something team members, who pop in and out of the kitchen/lounge room, curiously tasting their boss’ latest salad creation and joining our conversation, stands proof of an equally well-balanced company culture, which the young woman has created over the last decade.

From ‘little project’ to SME

The QiVinci music stand is operated by a foot pedal and silently turns pages. Photo: Qidenus TechnologiesBack in 2003, the then 21-year-old was a business student, who could already look back to having started two ventures: a “junior enterprise” offering art classes for senior citizens, which she ran through a school project as well as Vienna’s first interscholastic ball event – the Wiener Schulball – a brand Sofie later sold for “good money”. Knowing about Sofie’s legacy and talent, a professor at the Institute for Entrepreneurship and Innovation connected her to Alfred Jakes, an inventor looking for business students to help market his automated page-turner for music scores. Business-savvy Sofie took on the challenge, initially keeping quiet about it in front of her friends and family. “For about a year, Ididn’t really talk about it and merely referred to it as ‘my little project’. The thing was, I was sceptical about it myself. A 21-year-old girl starting a robotics business – how crazy is that? I didn’t even know anything about the technology to begin with.” 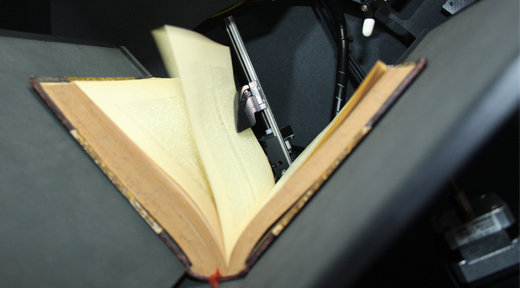 Qidenus’ ‘bionic finger’ is modelled after the human index finger and turns pages by choosing ‘the path of least resistance’. Photo: Qidenus TechnologiesBut as the little project grew bigger, Sofie’s doubts diminished. She dropped out of university to fully concentrate on developing a business model for Jakes’ patented ‘bionic finger’ page-turner, which later became the subject of her Master’s thesis. After establishing the Sofie Quidenus KEG (a “Kommanditerwerbsgesellschaft“, an Austrian type of limited commercial partnership) in 2004 and securing a research grant from FFG as well as investment from Austrian management doyen Hansjörg Tenng, the Qidenus Technologies GmbH was set up in 2005 using its CEO’s unusual, slightly modified surname as a brand. Qidenus joined the INiTS incubator programme and released its first product in 2006, a music stand of the QiVinci series using a foot pedal to silently turn the pages of music scores. 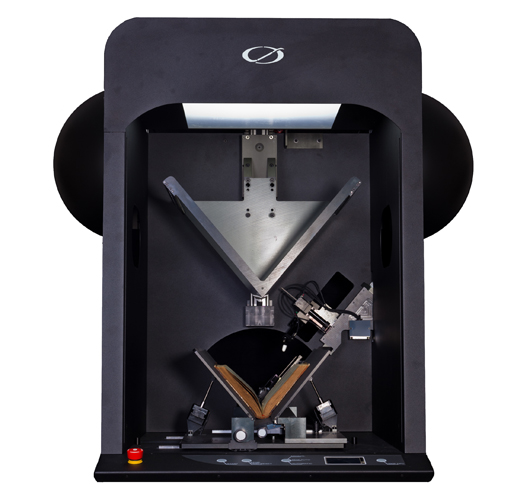 The RBS (Robotic Book Scan) Full is a fully automated book scanner that can scan up to 2.200 pages/hour. Photo: Qidenus TechnologiesInitially targeted at musicians, the ‘bionic finger’ patent was applied to further technologies, developed and manufactured in Austria. QiCare is a voice or foot pedal operated page-turner enabling physically challenged people to read books and magazines. A new R&D focus was set with QiScan and its high-end robotic book scan systems for mass digitisation. With major customers like the Library of Alexandria and the Austrian National Library, the product range has become the core of the company. Now Qidenus wants to take their product to the private consumer market for book digitisation. 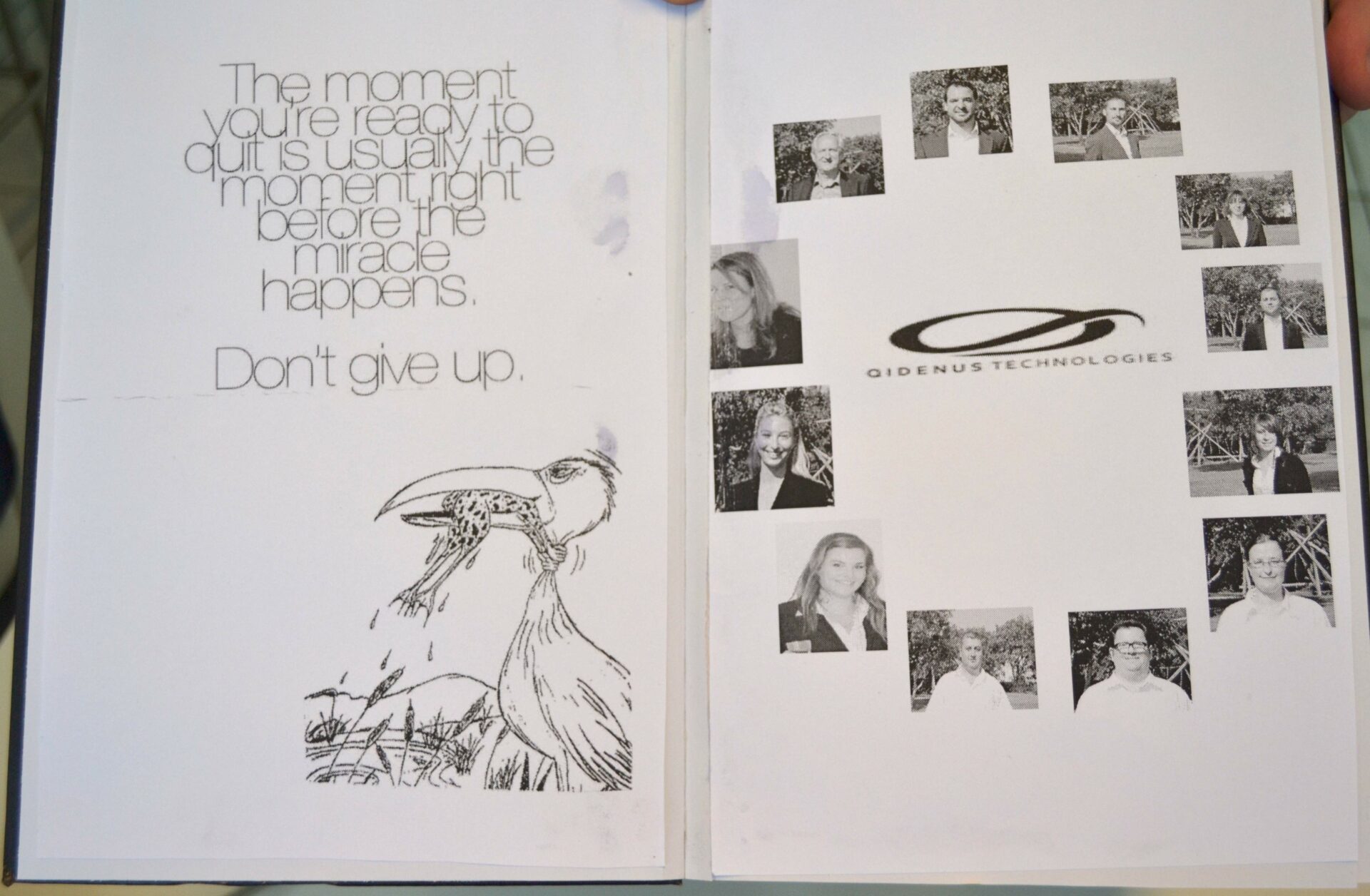 The Qidenus ‘family album’Since 2004, Sofie and her company of altogether 16 shareholders (Sofie holds the biggest share of 33%, inventor Alfred Jakes 10%) have been the recipient of numerous awards and funding by AWS as well as broad press coverage, including a recent feature in Wired. After more than 8 years in business, 1 million euros of investment of Austrian private capital, an estimated 2.1 million euros of annual revenue and 90.000 euros in profit last year, Qidenus is growing. Yet, “to finance growth out of your own cashflow is quite a challenge, it requires permanent juggling.”

Although they are beyond the startup stage, Sofie still thinks of Qidenus in these terms.“We have no routine of just working off our hours. Not a single day passes without getting new input from the team. We’re flexible and it’s not clear where we will be two years from now. Moreover, our co-workers identify with Qidenus and often refer to it as ‘my company.’ Therefore, I like to say, we have 18 co-founders,” she smiles.

Nodding at one of them, Dominik, who has been working in Qidenus’ technology development department for three years, Sofie recalls, “There have been rather tough times, when there was no money on ouraccount and we had to lay off staff or ask them to keep working without pay. I was lucky to be able to count on their support.” Dominik interjects, “Sofie had the brilliant idea of using the word ‘fun’ instead of ‘problem’ – since then we’re having more fun than ever,” he jokes. 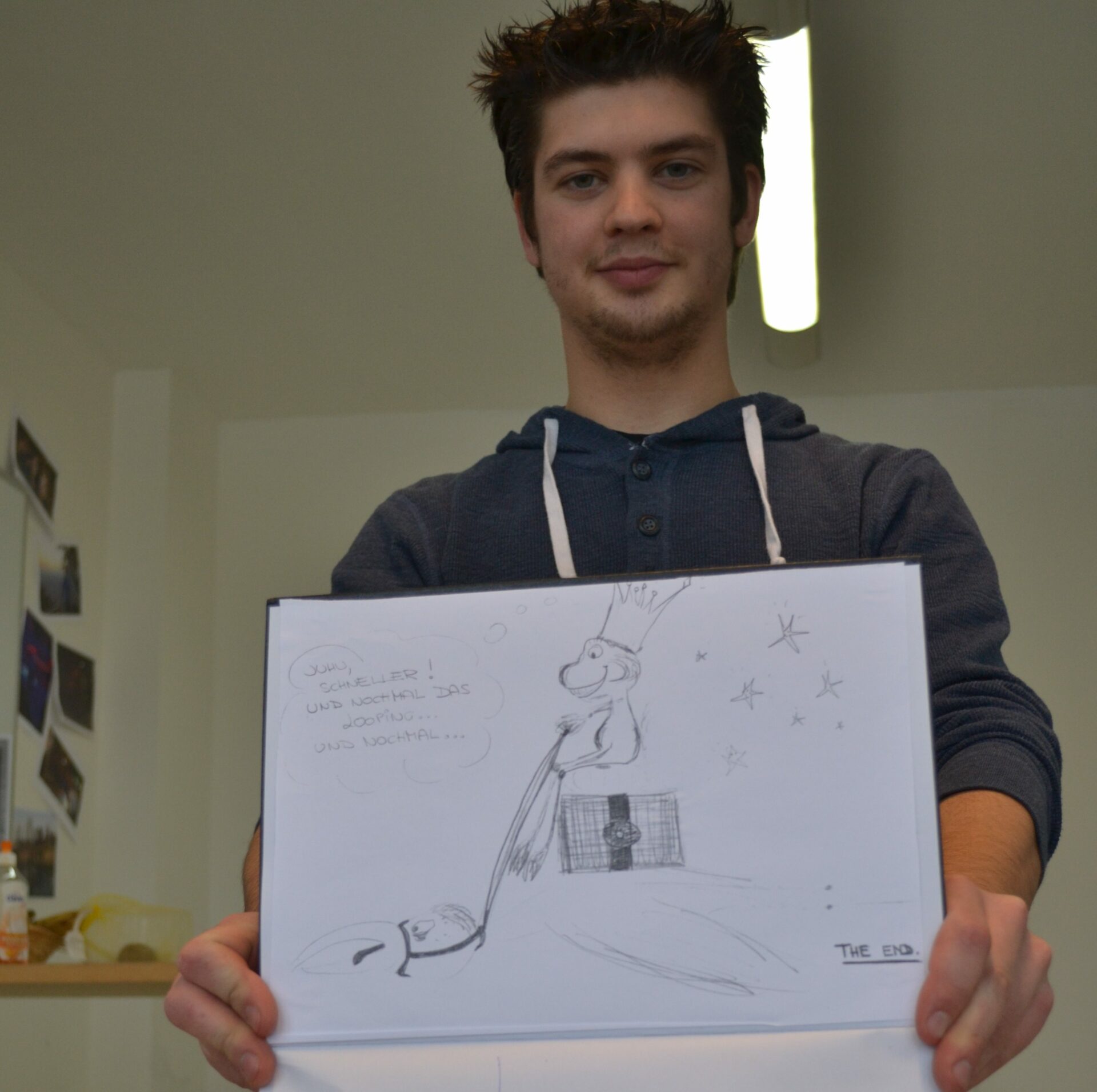 “Co-founder” Dominik and Sofie’s optimistic drawingFor laughs, Dominik presents me with another example of his boss’ seemingly borderless optimism: a whimsical drawing of an enthusiastic frog riding a stork that Sofie made – the sequel to a cheesy motivational picture of a frog inside a stork’s beak holding on to its life by strangling the bird. “Don’t give up,” says the caption. “The moment you’re ready to quit is usually the moment right before the miracle happens,” Sofie has added to the original, which alongside her drawing, is kept in the company’s ‘family album’. 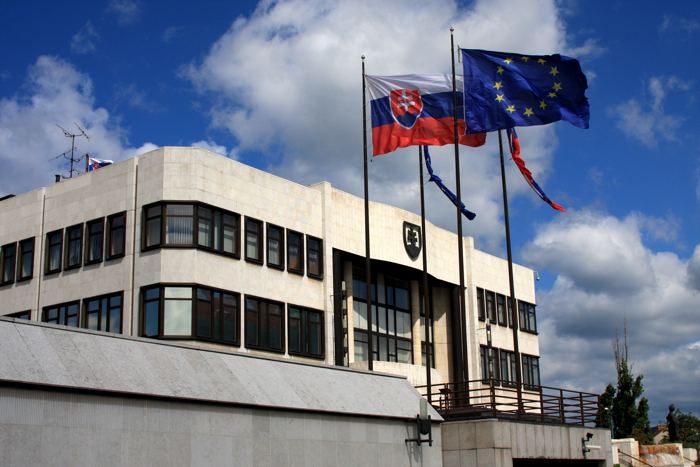 The Slovak government has announced it would spend 225 million euros on projects for Small and Medium Entreprises (SMEs) with the hope of creating 1200 new jobs by 2015. Each of the projects to be funded has to commit to creating at least one job for a young person.

The governmental initiative is aimed at alleviating the lack of private capital available to companies in the country. With no VC investments made in the country during the last year, Slovakia was last among the 25 EU countries according to the 2012 yearbook of the European Private Equity and Venture Capital Association.

Read an article on the announcement in Slovak here.