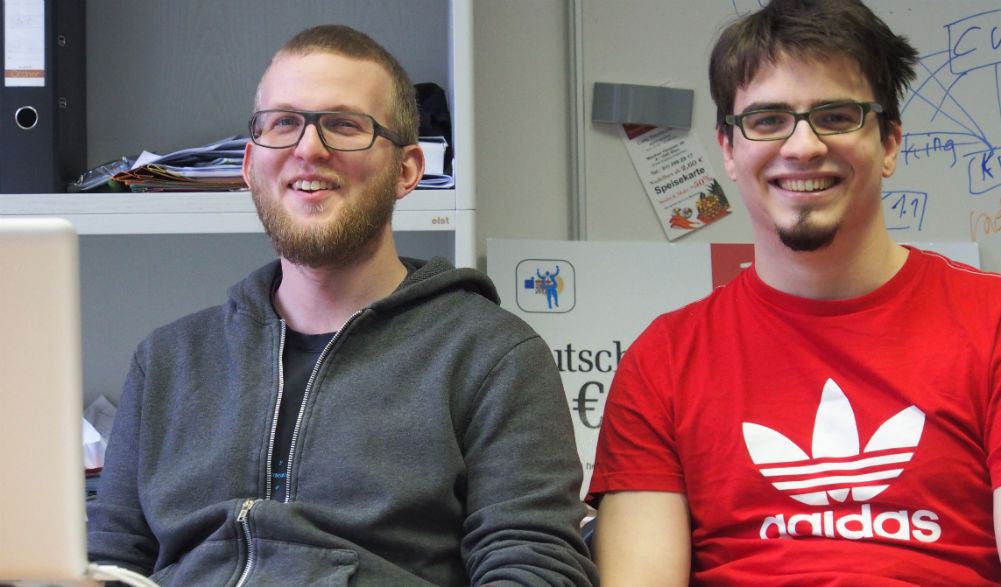 indoo.rs is positioned for success.  Fresh from a SpeedInvest-supported round of meetings with Silicon Valley wheelers and dealers and having won Gewinn magazine’s “Best Young Entrepreneur IT/e-Commerce 2012”, the Austrian startup is poised to announce some big investment news. inventures.eu’s Michael Bernstein met the founders, Bernd Gruber and Markus Krainz, to talk about their evolution and future plans.

Friends since they were classmates at HTL (technical high school) in St. Pölten, Lower Austria, Bernd Gruber and Markus Krainz continued their friendship into university. Before getting their degrees, they both dropped out to co-found CustomLBS and to develop indoo.rs, an indoor positioning technology enabling location services inside multi-storey buildings.  Bernd studied business and Chinese at Vienna’s University of Economics and Business (WU) and it was during an 11-hour airport layover on a study trip to China that he came up with the idea for indoo.rs.

The layover terminal was brand new and it wasn’t yet well sign-posted, so “it wasn’t easy to find my way around. It took me hours to find the bathroom and restaurants.  I looked unsuccessfully for something on my mobile phone to tell me where I could find something to eat.  That’s where the idea for indoo.rs came from.  I came home and asked Markus if he could build it and he said ‘yes, just give me time.’” 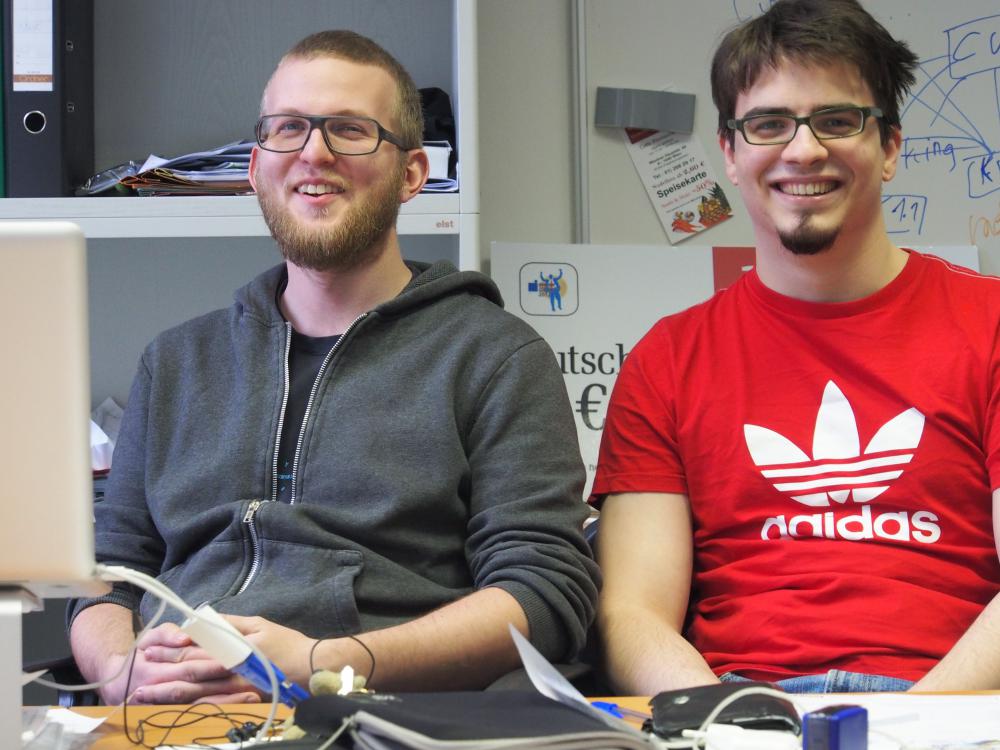 “It took a little longer than I expected,” laughs Markus, who studied Electrical Engineering at Vienna’s Technical University.  The division of labour – Markus the engineer and Bernd the business guy – became the core of their enterprise, but it helps that each has a solid background in both fields.

Markus comes from an entrepreneurial family.  His parents built filling stations and car washes and he was exposed to a business mind-set early on, witnessing his parents on the job.  “I originally went to business school but then changed to electrical engineering because I like the technology side more.  It’s more…” “Smart,” interjects Bernd.  They both like to complete each other’s sentences.  Markus also participated in the hacker circles of Metalab, Sektor 5 and the Chaos Computer Club, but his drive to create a business wasn’t satisfied there.  “Bernd helped to push me inthat direction,” he admits.

Both founders put everything they had into the project and Markus’s parents kicked in generous support, no strings attached.  This and some seed money from Departure led to a working prototype. In November 2010, they demonstrated it at Mobile Monday Vienna‘s demo night, winning first prize and a shot at the 2011 Mobile Premier Awards in Barcelona.  There, they made it into the finals, but were edged out for first place.  Nevertheless, their prototype turned a lot of heads and got people thinking about building apps with indoo.rs’ SDK.

“It was at this point when Markus’s mother said, ‘you’ve got to milk the cows while they’re full of milk,’” recalls Bernd (it sounds better in German).  Besides squeezing the parental udders a bit more, they received additional funding from INITS and AWS. They also got noticed by Vienna-based Frequentis, a global market leader in critical application communications infrastructure.

“We did a demo of indoo.rs at Frequentis’s HQ—a challenging test for our technology—and we got great feedback and support.  They got our feet in the door to the whole safety-critical services sector,” says Markus.  To accommodate indoo.rs’ growing staff, Frequentis also gave them office space—unfortunately not at their sleek, modern HQ, but rather at their business-incubator space—a less-than-glamourous yet functional building reminiscent of certain low-level magistrate bureaus.  According to Bernd, “Frequentis’s CFO bought it for her CEO husband as a birthday present.” But its location in Vienna’s fourth district makes up for its lack of style.  Markus lives two blocks away and can work long past midnight without having to worry about making the last subway train home.

Their current office layout mirrors the technical vs. business division in their partnership.  Two  small offices are separated by a labyrinthine hallway.  On purpose? “No, it’s a problem, but we’re moving to a single, bigger space downstairs next month,” says Bernd.  Markus agrees that the physical separation is bad, but that “it’s very important to separate management of the business and tech tasks.  If you need two decisions for everything, it doesn’t scale.” Bernd adds, “We keep each other informed, but each is responsible for decisions in his area.  If we all have to agree on everything, it becomes only about communicating and not about working.”

Nevertheless, communication is critically important to their expanding staff, who are carefully picked not just for their talent (a lead engineer left CERN after finding the Higg’s Boson), but for how they fit into the team, can be delegated to with confidence and be, of course, discreet (“Our NDAs are pretty strict”). To keep everyone on the right path, Markus says, “We have daily stand-ups, we do code-reviews – four eyes on everything – and weekly meetings to set upcoming priorities.” 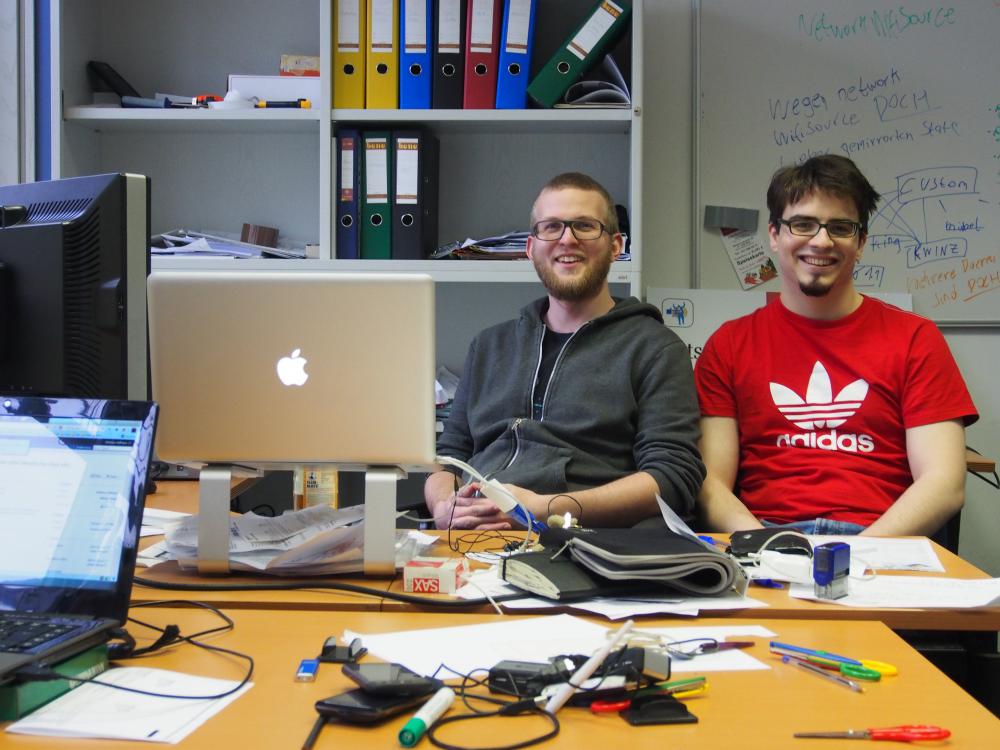 Could the company survive without either one of them? According to Markus, “we had to take out a huge insurance policy” to protect the company against one or the other becoming, well, incapacitated. That’s certainly one way to cope with entrepreneurial risk, but business risk in general is hardly an issue. “We really had to believe in our idea to put in all our time, all our money, our parents’ money into our product, which is built on original research. At the beginning, we didn’t know if it would even work, but we were always confident that it would be commercially marketable.”

Nor does competition scare them. “The field is young and we are keeping our ‘enemies’ close.  So far, others are only saying that they it’s possible to do what we do, while we have something that actually works now. We got the early jump,” boasts Bernd.

Austria vs. the Bay Area: All about the tap water?

They’ll be going back to the Bay Area in a few weeks for a busy schedule of meetings with M&A firms, app developers, semiconductor companies, and OS vendors. “We’re in touch with ARM and Qualcomm, trying to bring our technology to the semiconductor level, and in deep talks with OS vendors who want to implement indoo.rs into their OS.”  Still, no plans to incorporate in the USA: “as long as we can avoid spending more legal fees, we won’t do it.”  For now, the Austrian GmbH entity suits their purposes and they don’t want to be so far away from their Austrian staff, nor the excellent tap water in Vienna.

The new infusion of private investment will get them through the next critical 18 months. But it’s more than just money that they get from their investors: “they bring us business expertise, customer development leads, and diverse contacts that help us a lot.” 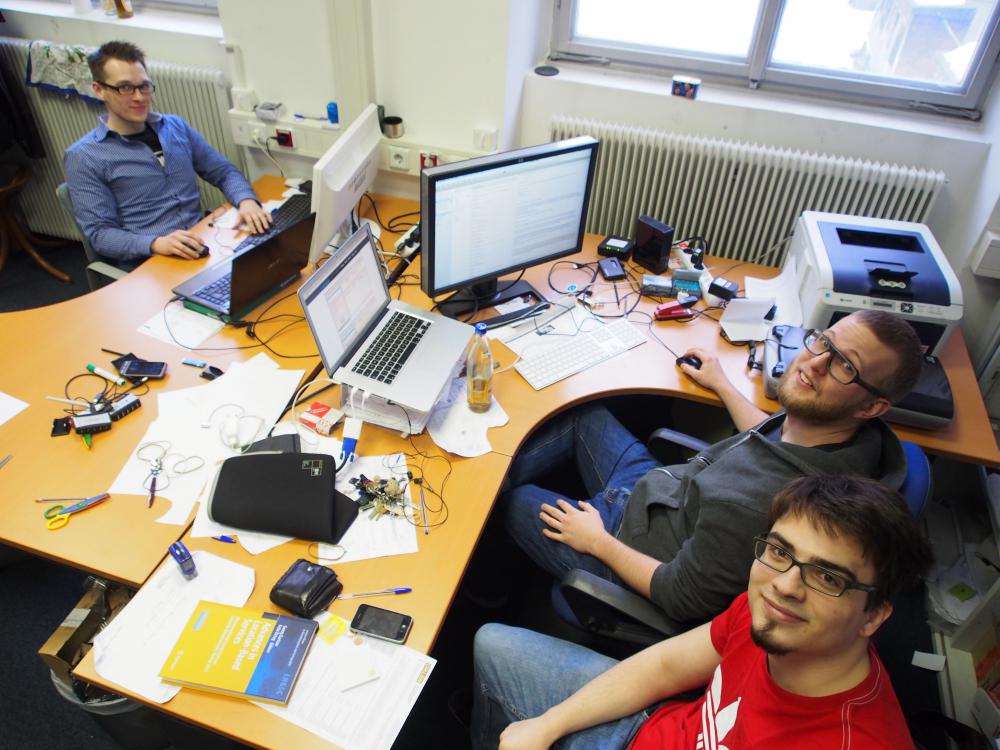 Photo by indoo.rsSuccess for Bernd and Markus will be The Exit.  Would they ever go outside of indoo.rs? Even if they sold their stake, they could conceivably keep working on the project, “there will always be opportunities for improving speed, accuracy and usability. We’re constantly working on that and will never run out of things to do.”  If they do start up a new venture, they would almost certainly keep their partnership, indeed their friendship, intact.