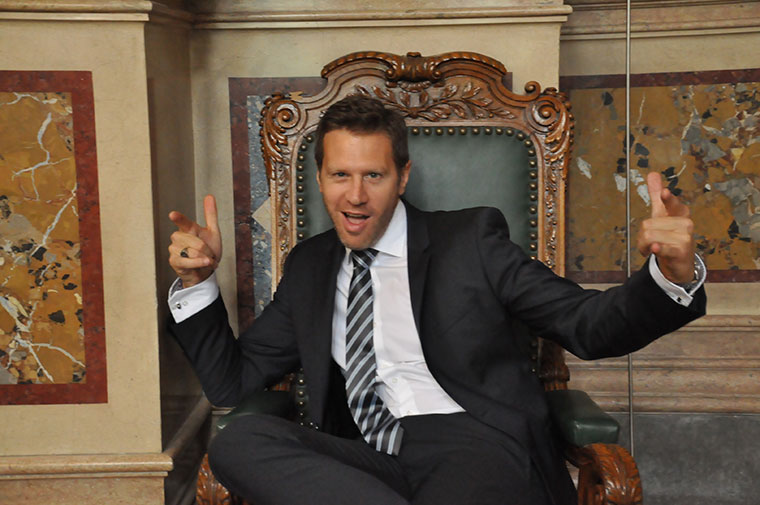 “I have some basic intentions.  I want to make an entrepreneur more successful. When I go to decide what to do to make the world a better place, I start talking very openly with people, asking them, ‘what bores you the most in your everyday experience? What excites you the most?’ And whenever during such a conversation I see strong emotions, positive or negative, that’s where there is potential for innovation.” 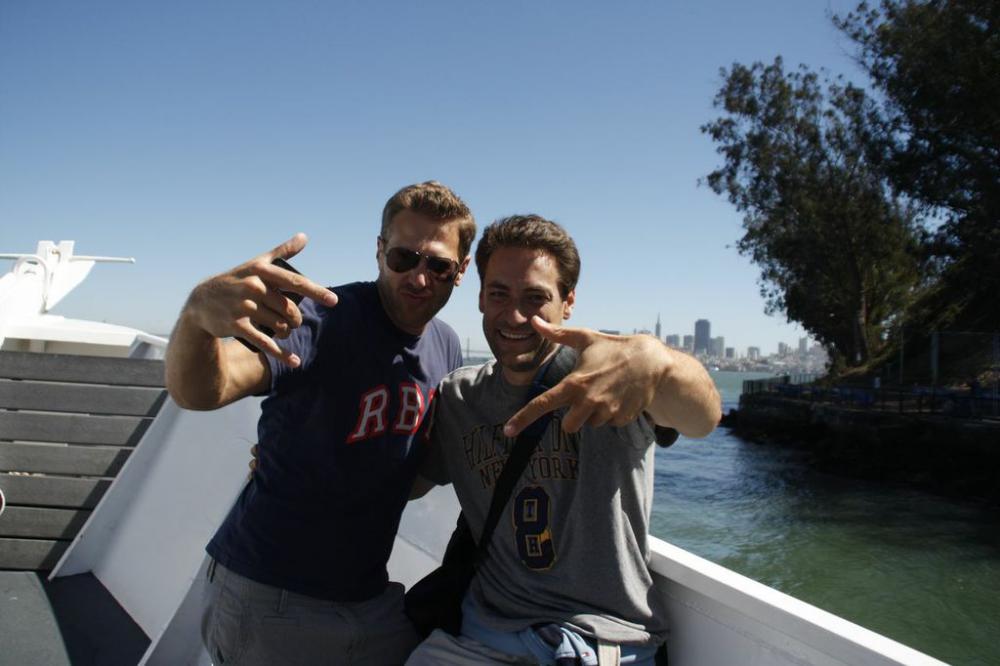 Harald Trautsch and Everbill’s COO Michael Kunz. Photo credit: EverbillThe son of an elementary school teacher, Trautsch values learning and understanding as the key to business success.  He holds four academic degrees and still finds time to teach marketing and sales at Wiener Neustadt’s University of Applied Sciences, while shuttling back and forth between Vienna and Silicon Valley.

Trautsch has been crossing the pond for a long time.  He got his Bachelors degree in electronics and one of his dual MBAs in the USA. But as a young boy, he wanted to be a cowboy, because they “are always out there in nature, they can’t go home to mama and cry. If you need something, either you build it yourself, or you find a substitute, or you die in the night out in the desert. In the wilderness, you have to fight for what you want, interact with your environment, your horse. This formed the paradigm of how I operate, it was never an option to give up.”

In the 1990s, Trautsch began his entrepreneurial career by importing and distributing video games through video rental stores, filling an evident market demand. Later, with a friend, he got involved in the auto-alarm business, integrating telematics solutions into cars.

Although prohibited in Europe, remote car starters were popular in America. “But one of our Austrian car-alarm customers wanted one anyway, so we got the idea to start the car not just with a remote control, but with a land-line phone. We adapted a parking-heater unit, which was operated through the pager network, to remote start his car by sending a telephone page.”

Then one day, he learned that Telekom Austria was shutting down its pager network. He recalls, “while I knew that my customer would be upset, I also knew that the company that made the parking heaters (and sold about 1 million units per year) would have a much bigger problem and might be interested in our telematics solutions.  The head of their Austrian subsidiary agreed to let us build a prototype for him, on a tight 2-week deadline. When he saw the homemade contraption we brought to him, he thought we’d ruin his new Jaguar. But we soldered it in and it worked!  You could telephone the unit and operate the heating unit easily through phone-tree commands.”

“The next week, I suddenly found myself in the centre of their board meeting, explaining how we could do in two weeks what their own R&D department couldn’t do in two years.  I asked them why they had been trying to implement a SMS solution, when their mature customers weren’t comfortable sending text messages (back then, anyway) and a voice call would be easier.  That convinced them and it became my first big deal.  We sold tens of thousands of units.”

Thus emerged Dolphin Technologies, which went on to market telematics solutions for insurance companies—tracking stolen vehicles, automatic crash notification. Although Dolphin became the market leader in this business and still grows even today, Trautsch sold off part of the company to found Blue Monkeys with three other software and web developers he had previously worked with. “I thought they could do better and grow the business.  So we scaled our services, are now 22 employees and one of the most successful multimedia agencies in Austria.”

Blue Monkeys’ main goal was to make exciting websites and portals for other organisations. “But soon we faced the problem of having no overview of our own company.  We looked on the market for basic business-process software, for easy tasks like making bids and writing invoices. We couldn’t find anything that fit our needs, so we built a platform for ourselves.” 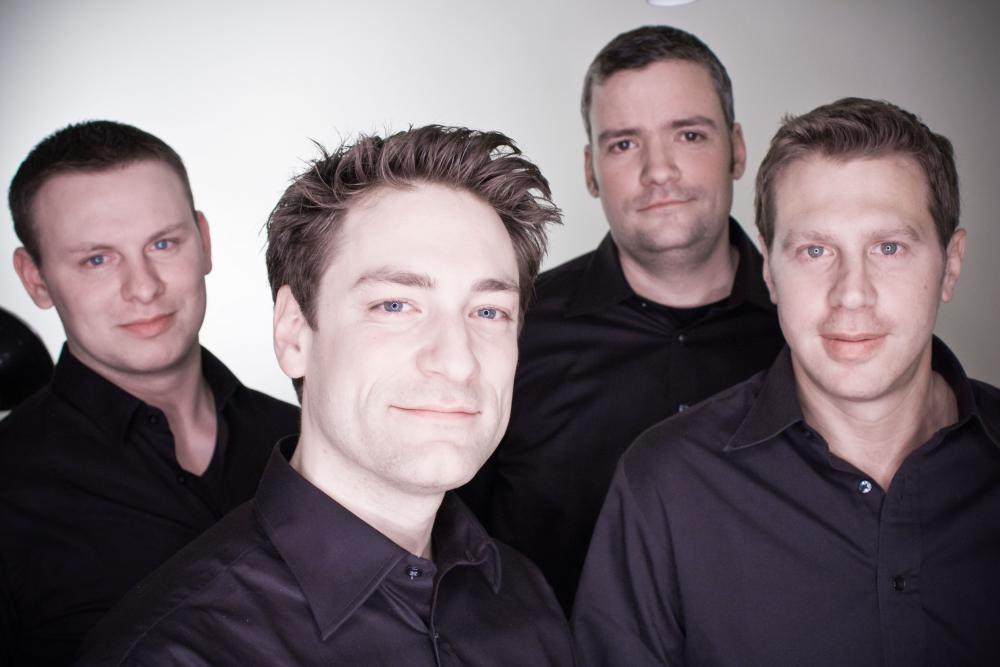 The Everbill founding team (f.l.t.r.): Robert Beisteiner, Michael Kunz, Gerald Aichholzer and Harald Trautsch. Photo Credit: EverbillNever intending it to grow beyond a prototype, they soon found out that there was a big demand for a low-cost, low maintenance alternative to SAP solutions. Everbill (originally named Epunet), eventually won the Austrian State Prize for Multimedia/e-business in 2009 and got traction in the local SME market. After a few years, Trautsch had to choose between taking the product to the next level or letting it go. “We wanted to be responsible to those who were using it and couldn’t just switch it off, so we applied for the Go Silicon Valley initiative.” They were accepted for the three-month technology development program in 2012.

Before taking off for California, Trautsch & Co. did some market analysis. “I learned that 50% of US companies don’t use any kind of software to manage their businesses.  I thought, even if there are 500 competitors out there, none of them are filling this huge market void of 13.5 million businesses! Maybe half of these don’t need software because they’re using a cash register, but what about the remaining 6.5 million?”

Market scale is perhaps the biggest reason to take one’s product to America, but Trautsch points out several other differences between Austrian and American entrepreneurial attitudes, which eventually motivated him to incorporate Everbill in the USA (with a subsidiary GmbH in Austria).

“In the US, it’s pretty easy to convince people to try out your product. They don’t care if you’re in a crappy prototype phase or if your product is nicely polished. In Austria, if the design changes from one day to the next, people will call to complain, but in the US people are excited because they see evolution! In Austria and Germany people expect a product that is completely ready and 100% bulletproof.  What they don’t understand is that this approach limits competition, makes everything more expensive, and results in market monopolies.”

Trautsch believes the biggest difference between entrepreneurs in America and Austria is how people treat an idea: “Austrians with ideas think they are awesome. Americans place no value on ideas until they are executed. Austrians don’t tell people about their idea, because they’re afraid of it being stolen.  Americans don’t worry about idea theft because ideas alone have no value, so they discuss them openly. They’re not scared when someone else has the same idea, because there is always a way to differentiate your product and the market is big enough. If nobody is doing what you’re doing, there is probably no market for it!”

But of course, the big issue is being where the money is. One month after arriving in Silicon Valley in the summer of 2012, Everbill was taken up by the renowned accelerator500startups, who helped them get to their current, oversubscribed investment round of 500K dollars. “We have some investors who are trying to squeeze into this round,” says Trautsch, “but we can be choosy. We’re focusing on referral marketing, so we are looking for investors with expertise in gamification, viralisation, vertical partners in banking and telecom…and especially partners who know our SME market.”

He continues, “Even if American investors turn you down for their portfolio, they are really interested in learning about your success and stay in close contact, proactively asking how you’re evolving.  They want to know when the company might come closer to their portfolio sweet spot.”

Since spending six months in the Valley, Trautsch is “much more a number guy now, but in a positive way. Before we might have done something intuitively just because it looks better. Now itonly looks better if there is a measurable result. I’m still using my intuition, just not trusting it 100% anymore. I ask questions.”

Giving back to Austria? 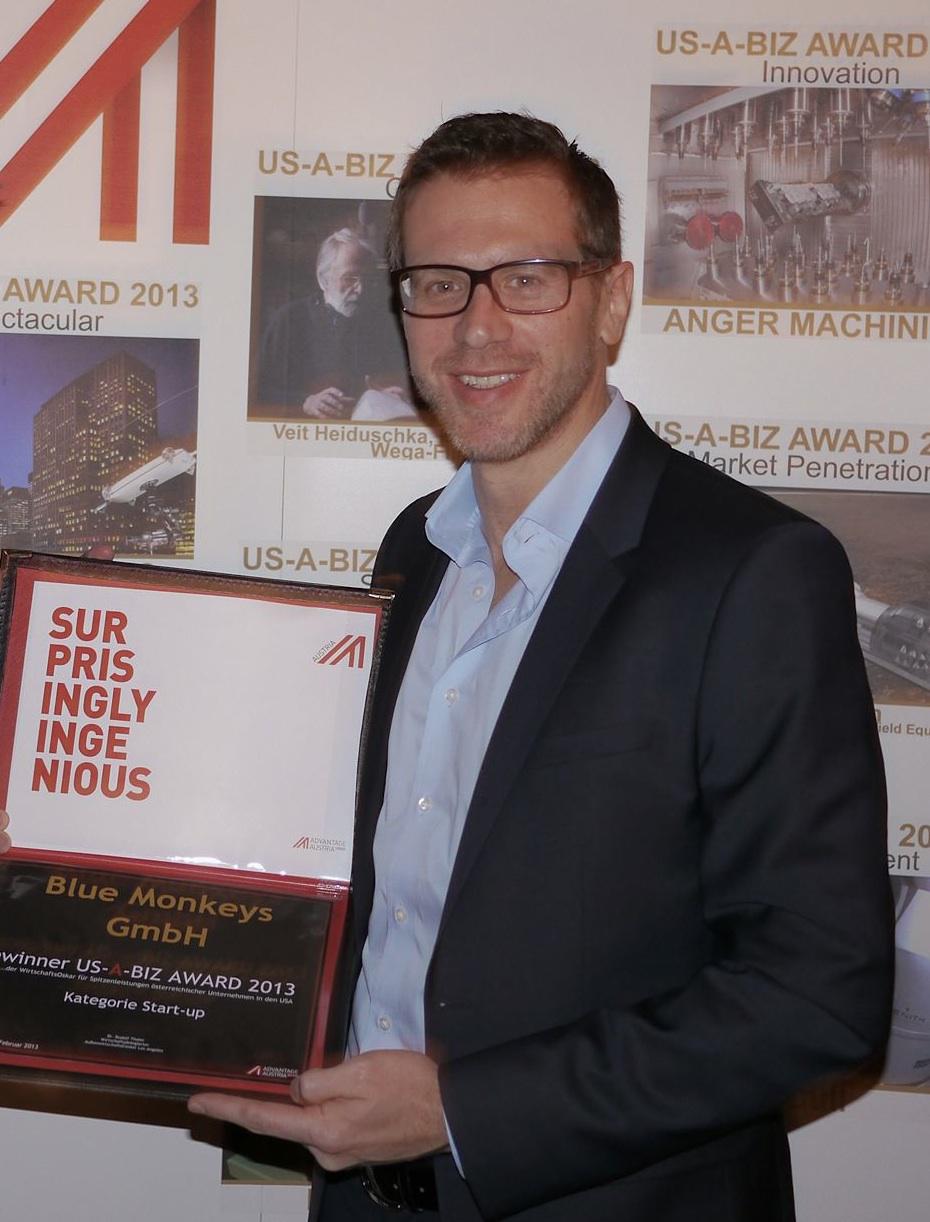 Last month, Blue Monkeys won the Austrian Economic Chamber’s USA-A-Biz Award 2013 in the startup category. Photo credit: Blue MonkeysHas Austria lost Trautsch to the New World, or will he return some of his good fortune to his homeland? “We pay hundreds of thousands of Euros in taxes in Austria, we employ 30 people here, I’m teaching and I’m available to all my students, I’m mentoring – that’s how I give back. Also, our products are building value for society and are ethically correct.”

Trautsch’s latest project, iVoting, is another example of making things that make sense. It enables real-time audience voting on mobile devices to be integrated into live presentations. “Life is too short for boring presentations. I feel this from my heart and have backed it up with 50K euros of my own money. iVoting doesn’t necessarily make people better presenters, but the audience interaction it provides makes it more entertaining and helps people remember what they learn.”

But one can tell that this project won’t keep this cowboy in town for too long. The wilderness is calling and he stares down the long, dusty trail into the sunset: “In the long-term, I will work on the question, ‘Why do we have to grow to sustain our economy?’ The problems are benchmark thinking – how am I better or worse than others – and [inflation], which disrupts value. We need models that generate energy out of reduction, not growth. How can we be better people, improve our planet, not push each other down in order to move up. Why can’t we build values other than money, status and wealth.”