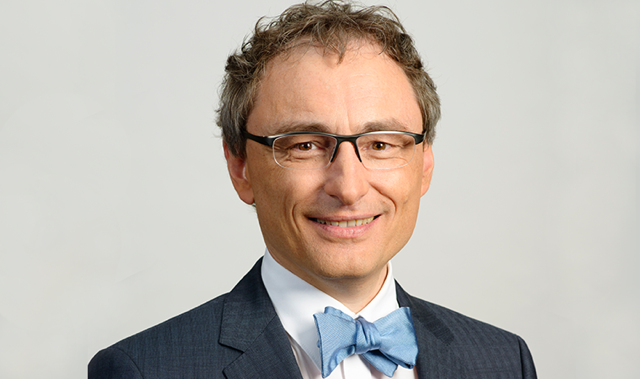 Christoph Holz describes himself as a „late vintage founder.” At the age of 47, the Tyrolean counts himself among the late-comers to the world of startups. Together with Christian Junger, now technical director at visalyze, Christoph says, he “wanted to find out if we could still pull something like that off in our old days.”

Christoph, wearing his trademark bow tie, has a degree in IT and aerospace engineering. Upon graduating from university, he founded an internet agency in 1995 and worked 70 hour weeks for years. Now, he has two small children and says that he has “reached an age in which a proper life-work balance becomes more and more important.”

He also works a lot during the night. The things keeping him awake usually revolve around his startup visalyze, a software service that provides visual analyses of social media accounts he founded in 2011. “Social media was actually not our starting point – data journalism tools were,” Christoph explains. “The central question that acted as a catalyst for the foundation of the startup was: how can we find new areas of application for our visualisation competencies?”

So Christoph and his team called 40-50 people, who are among the Top 100 social media professionals in the German-speaking world, and asked them if they were in need of visual support for their work. Having received positive feedback, they started looking for pilot clients who would potentially be interested in such visualisations. Stiegl, an Austrian beer brewery, contracted them for an individual project, in which Christoph’s team analysed the company’s Facebook page. That’s what got the ball rolling.

A blessing in disguise

In a wider context, “being successful on social media nowadays is a blessing in disguise,” Christoph says. With hundreds of thousands of tweets per hour and thousands of comments on Facebook, social media managers are often overwhelmed by the sheer number of posts that make it almost impossible to keep a proper overview of what is happening without missing important patterns and events.

“This is where we come in,” says Christoph. He and his team assert they “deliver visual patterns that provide an individual understanding of what is happening on one’s social media page. That way, they “allow social media professionals to intuitively notice optical patterns and anomalies that they wouldn’t be able to discern from a statistic.” 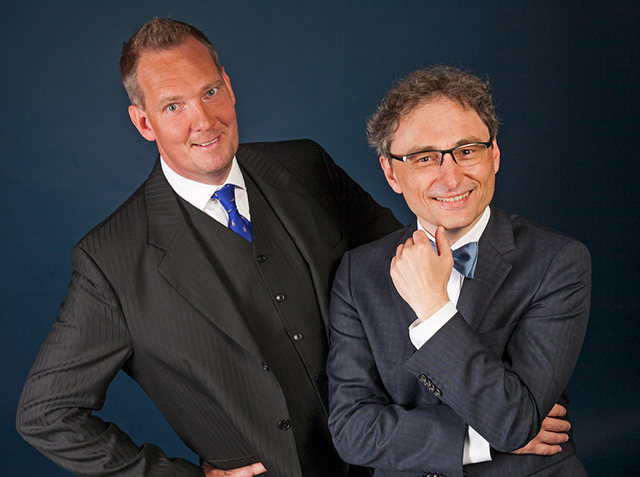 Photo credit: visalyzeFor that, Christoph’s team uses data journalism tools – and takes them a step further. “In data journalism, you look for an event that everyone can relate to. But that doesn’t necessarily visualise your personal environment,” he explains. “Visalyze delivers data in real-time and focuses on the personally relevant environment,” he says. This individually relevant environment is closely linked to the social media presence of competitors. “Let’s say, for example, you manage a company’s Facebook page and you receive a notification that you have 73 new fans. That, by itself, is just a number. But seeing how your page is developing in comparison to those of your competitors gives you some real insight into what has worked for you in your social media presence. After all, the delineation from other brands is what makes a brand,” says Christoph.

The relevant data is gathered via the API interface from Facebook. By only collecting data that has been released, visalyze is on sound legal terrain. In order to make the tool more accessible, it’s designed to look and feel like a video game, with different levels of difficulty, so as to not overwhelm beginners. “It’s supposed to be intuitive and fun,” says Christoph. “The value of games is that they create a feeling of happiness, as a direct result of the immediate feedback you get when ‘playing’”, namely when you are interacting with the product’s visualisations of your social media presence.

But this is also where the challenges lie for visalyze. “We have learnt to read maps and pie charts but with our tool, you first need to grapple with it before you can take advantage of it,” Christoph explains. Thus, the biggest hurdle for his team comes with the introduction of the product to the market.

The launch of the product was timed to coincide with the international computer trade fair CeBIT this March, where, according to Christoph, visalyze “was high in demand.”

Visalyze started with an investment of 1.2 million euros, having received 70.000 from CAST and 200.000 from AWS, with FFG contributing another 260.000 euros. Such financing through public bodies has enabled visalyze to hire specialists from all over the world, including developers from India and Denmark. Although the team is becoming more and more international, Christoph makes sure his team of eleven is firmly rooted in local traditions and habits. “When we were hiring the Danish co-worker, we had pretty intense salary negotiations – until I included a yearly ski pass in his contract. With that, he was immediately on board,” he laughs.

Pricing has proven quite difficult, as „everyone keeps telling us that we are too cheap,“ says Christoph. Visalyze offers monthly subscriptions for firms based on a 16-euro rate per page. While 16 euros per month does seem like a bargain, the numbers increase significantly when taking into account that most clients would want their competitors’ pages analysed as well so as to get a proper understanding of the market patterns.

Not everyone who has a Facebook account is automatically a potential visalyze client. “We are not interested in ORF [the Austrian national public service broadcaster], for example,” says Christoph. “We analysed Ö3 [an Austrian radio channel] and found out that the most often used words were ‘please’ and ‘thank you’ – as in ‘please play this song for me’ and ‘thank you for having played this song’. There is no dialogue in that; it’s simply an ordering system. That’s not our market,” says Christoph. “And on a more general level, some companies simply haven’t grasped the significance of social media yet.”

Visalyze clients are “highly involved and dialogue-oriented“, as he puts it. However, not all companies that have reached a certain level of professionalisation in the field of social media will automatically pay for the visalyze service. “Although, for example, major brands might be excited about the product, they might not get a subscription because they fear the additional workload they think comes with any additional tool they purchase,” says Christoph. “These firms are often so used to indicator systems and business intelligence models they’re surprised when they hear there is a tool so intuitive it doesn’t require 14 days of training.”

Until 2015, Christoph and his team want to reach a market share of one-tenth of a percent among social media professionals globally. For 2015, that would mean acquiring 8.000 clients. To reach this goal, and to amass half a million euro investment capital, the visalyze team is currently looking for more investors – not only in Austria but also abroad. To get better access to such venture capital and to gain experience abroad, Christoph and six other team members will be among the 18 selected Austrian IT startups to spend three months in California this summer as part of the “Go Silicon Valley” initiative by the Austrian Chamber of Commerce.

Visalyze is also working on a Social Media command centre, an interactive hardware and software solution to manage big teams of social media managers. In addition, Christoph’s team is currently working on expanding their work in the field of big data, and have launched a free version of their visalyze-software. And that’s surely not old or vintage.