The impact of investing in impact investment

Last Friday, 7 July, the social-enterprise networks HUB Vienna and Toniic presented the second annual CEE Impact Day—the closing event of the 2013 Investment Ready Program (IRP). Last year’s happening was held in the modest facilities of HUB Vienna. This year, the noble and elite setting of the Österreichische Kontrollbank (OeKB) headquarters was indeed a symbol of this event’s growing importance in the increasingly modish field of Impact Investment.

The stated goal of the one-day symposium was to “band together social entrepreneurs with international investors and high-carat experts in order to sound out the possibilities of impact investment in and for the CEE, as well as to develop innovative strategies for positive social change.” In his opening remarks, Nikolaus Hutter (director of Toniic Europe and an IRP co-founder) added that a major goal of the day was to “make visible the great work of social-impact players in CEE.”

Alexis Eremia, Managing Director of HUB Vienna Incubation, said that she felt like “a school director at the year’s end, when all the parents come to see their kids graduate.” Since last December, she had worked closely with the IRP participants, who were selected at six regional warm-up events (see links to our previous coverage below) and who subsequently participated in five months of intensive capacity-building modules, known as the “Academy.” The proud parents were the many institutional investors and experts attending the event. 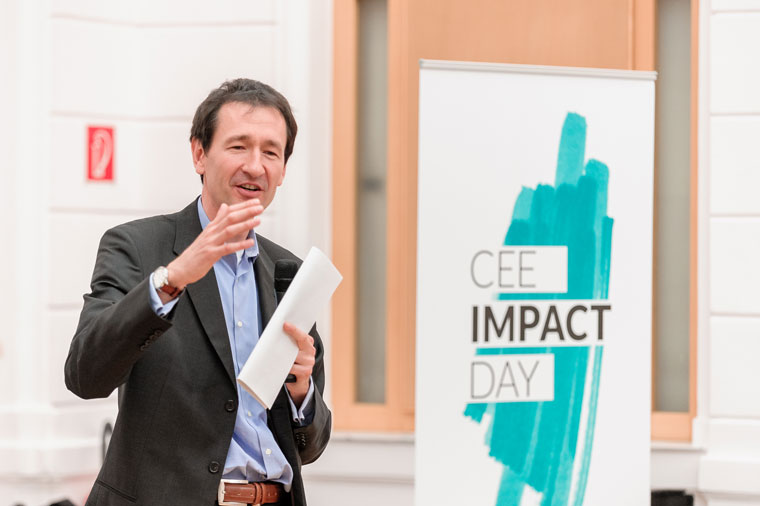 Ulrich Grabenwarter Photo credit: Michael KoschutnigThis year’s keynote speaker was one of the field’s most esteemed experts: Ulrich Grabenwarter, Head of Development for Impact and Social Investing at the European Investment Fund. He told the audience that the field should be proud of drawing attention to itself, citing the positive feedback it garnered at the recent G8 summit. Now that mainstream institutional investors are interested and increasingly involved, he believes that the field should also take time to recollect and make sure it’s not losing sight of the essentials—the value-creation importance of social impact enterprise. “Hopefully, this is not going to get lost in all the hype about impact investing nowadays. We need to make sure that this remains more than just a marketing tool,” he told inventures.eu.

Grabenwarter introduced those gathered to his three-week old “baby,” the Social Impact Accelerator—a public/private “fund of funds” for impact investing in the EU, including its accession and candidate countries—that will provide not only direct investment but also “infrastructure in order to assess social impact and make it transparent in terms of impact metrics.” Grabenwarter said, “our approach is to give social entrepreneurs the leeway to choose their own value indicators.”

Insight into the investor’s perspective

Sachs, introduced as an “ethical banker,” claimed that all of Credit Cooperatif’s 13 billion euros in assets have been invested in something with social value. He added, “the risk costs for social-impact investment are far below the normal investment sectors” and the other panelists agreed that Impact Investment has a proven record of low-risk and high-profit financial return.

This panel’s moderator, Martin Ruckensteiner of Innoimpact, asked the investors point blank: “how can social entrepreneurs get your money?” Hansmann—who confessed that he “didn’t know what Impact Investment was until six months ago”—gave the example of MySugr, which clearly identified a problem to be solved. He added, “however it’s not just about the concept, but about the passionate personalities of the founders and managers” and “at the end of the day, any business has to be profitable.” Archambeau also looks for passionate founders but warns that those who fail to bring outside talent into the enterprise for specific functions often make a big mistake. 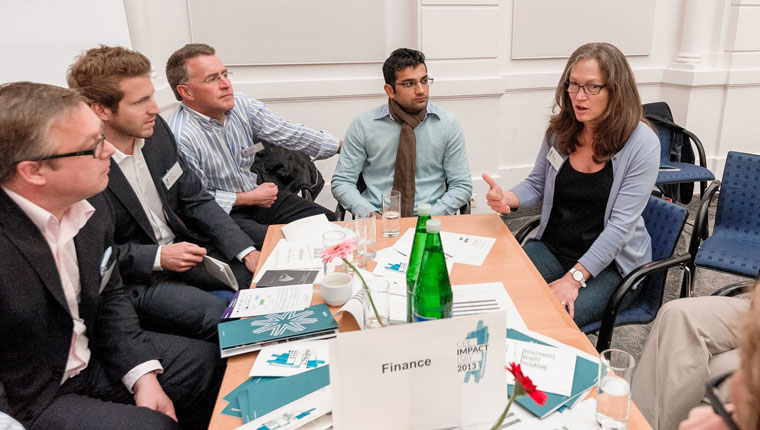 Interactive session with Lisa Kleissner Photo credit: Michael KoschutnigLisa Kleissner wants to see: impact metrics; an energetic entrepreneur who knows their business model inside and out; financials that don’t gloss over the bad news; projections that include the assumptions on which they are based; and a team with the “chutzpah” to develop their plans. She also wants to see some consideration of an exit strategy.

These demanding expectations were out into practice during the afternoon’s “interactive session”—perhaps the central agenda of the day’s programme—where investors met face-to-face with the selected ventures, who were seated around small tables and sorted according to sector (e.g., Energy & Environment; Consumer Goods; Tourism; etc.). The investors/experts were then invited to pick a table, listen to quick pitches from the ventures, and give them critical feedback. After 20 minutes, they would move on to another table.

When Kleissner joined an interactive session with ventures representing the waste-management sector (including Unfold, a sustainable packaging initiative from Austria, and RecoBin, a waste-recycling initiative from Hungary), she peppered them with questions almost faster than they could answer them and gave them a taste of what to expect from major-league impact investors.

Three IRP ventures (Pragulic, Servus, and Compuritas) were chosen to give more traditional pitch presentations to the entire audience, drawing generous applause and special attention from some investors.

The “fighting spirit” in CEE

Photo credit: Michael KoschutnigA panel discussion about specific CEE investment issues posed the question: is regional investment  an “opportunity or a necessity?” The unsurprising answer: both. The panelists—representing key CEE players HUB Global, Ashoka CEE, UNDP, Angello Development Foundation, and the Russian Chamber of Commerce and Industry—called for increased cooperation, capacity building, creativity, and PR to help increase capital flow into and from within CEE countries. HUB Global’s Hinnerk Hansen said that Eastern European entrepreneurs “have more fighting spirit” because they must operate in immature markets without access to certain advantages in Austria and Western Europe. The challenge, says Marie Ringler of Ashoka Austria, is to increase awareness of their achievements and successes in order to pave the way for the next generation of social entrepreneurs in the region.

Nick Mason, who recently joined the Toniic team in Vienna, told inventures.eu: “A Bosnian entrepreneur told me the main problem is making social entrepreneurs realise that they are social entrepreneurs. Then the challenge is to create the connections between companies or NGOs that normally run off grants and donations and transform them into high-impact organisations through investment.”

Grabenwarter acknowledges that in Eastern Europe, “there is a fairly underdeveloped investment infrastructure, so it takes more effort to make funds in that region investable for institutional investors.” The Social Impact Accelerator is therefore committed to bridge that gap. He added, “In Austria, the impact investment space – especially with activities of Toniic and Nicholas Hutter – has developed a gateway position linking the CEE with the western regions, where impact investing is more developed, especially in the UK and France.”

Looking farther east for best practices in the impact sector

The final segment of the event looked even farther eastward—to India’s Impact Investment sector—to learn about effective development strategies, and how to apply them in CEE. Aakif Merchant, representing Dasra Social Impact, presented case studies of successful Indian impact initiatives and stressed the importance of direct corporate involvement in the sector, as well as international enablers like Social Impact International. 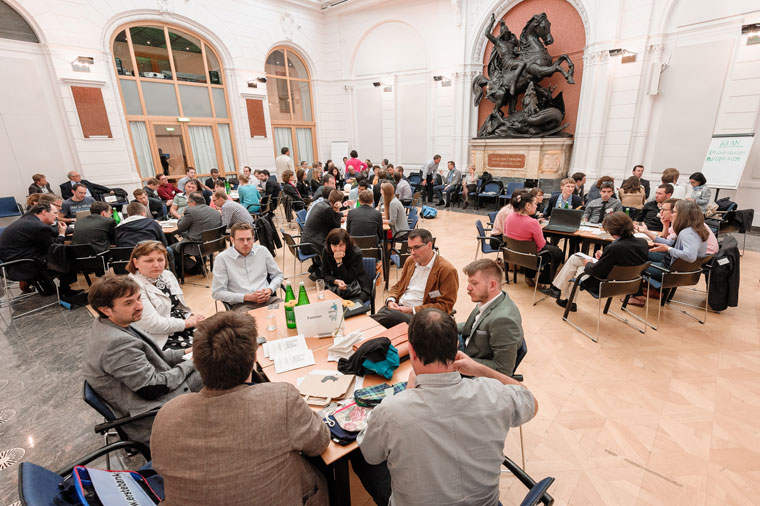 Photo credit: Michael KoschutnigAfter Merchant spoke, groups representing the four types of stakeholders at the conference (enablers, investors, entrepreneurs, and public-sector entities) met separately with the mandate of identifying the next immediate steps to take for the CEE region. The investors proposed a social impact fund for the region; the public sector agreed that lobbying efforts should be stepped up to get governments to create entrepreneur- and investor-friendly policy. The enabler group called for new heroes to rise up—a “Mother Jobs” (a mash-up of Teresa and Steve) who would be the worldwide representative of the regional social impact effort.

Like most of the more than 100 attendees (from more than 20 countries) at the event, IRP’s Lena Gansterer left the event feeling “hyped-up and energised. The turnout was double the previous year’s and balanced between investors, entrepreneurs and enablers.” Events and programmes such as these play an elemental role in building the infrastructure of communication in the region’s social impact field.

Previous coverage of the Investment Ready Program in inventures.eu:

Apply now: Investment Ready
One step closer to investment
A therapy for pessimism
How to ride a social business in CEE 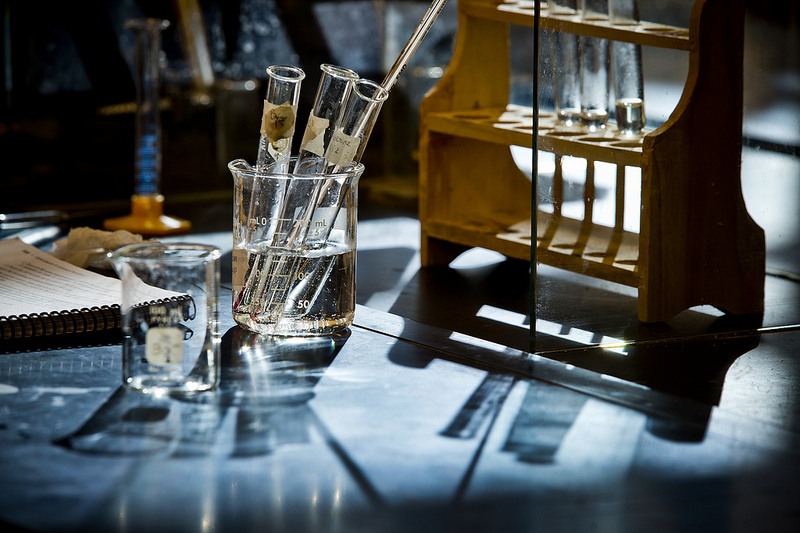 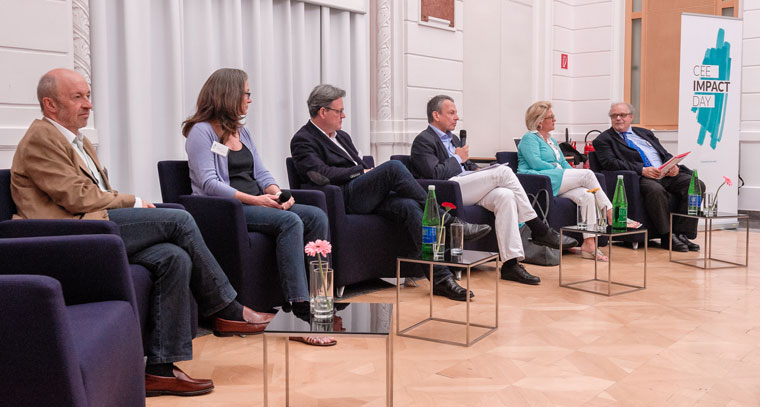 The impact of investing in impact investment